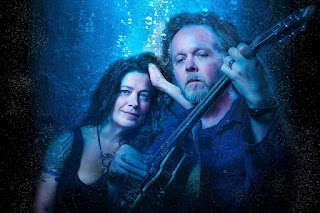 The Blue Hour - On The Wall.

Background -  Seattle-based 4AD-styled ethereal folk-noir duo The Blue Hour present their new video for 'On The Wall', the second single from their new album 'Always'. This 11-track offering is replete with swoons whirling the listener into the ether, wisped along with sonic elements cherished by fans of Kate Bush, This Mortal Coil, Marissa Nadler, Dead Can Dance, and Chelsea Wolfe.

The new video was created by Carl Andrén, a young man from Gothenburg, Sweden, whose childhood love of drawing has evolved into a truly unique approach to video production and animation.  The band also recently introduced their video for 'One More Mystery', based on original animation created by Rayhan Khan and produced by Rooster Studio.

'Always' comes on the trail of the duo's 'Kyoto Songs' single, featuring a beautiful rendition of The Cure classic 'Kyoto Song'.

Living near Seattle, Brian and Marselle Hodges have been inspired by their life amongst the moss and mud and the ferns and forests of the Pacific Northwest, their raw mix channeling the purely natural and the esoteric via The Blue Hour.

Blending traditional folk melodies with dream pop, ethereal wave and synthpop, the result is ethereal folk-noir that is unique to them, charged with haunting ambience and some classical structures. This potent cocktail creates an otherworldly and hypnotic effect, focusing on texture and rhythm and beautiful discord ... and most of all magic. WEBSITE, BANDCAMP, FACEBOOK.

We featured a couple of tracks from The Blue Hour a couple of months back and the second single 'On The Wall' & it's accompanying video are a welcome addition.The creative ideas and diversity of styles, ensures the duo keep surprising me, with their unique and fabulous music. 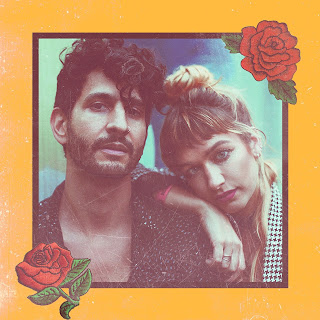 The indie-electronic duo, once referred to as “Fleetwood Mac with beats" has upcoming singles featuring Mix Master Mike of the Beastie Boys and a collaboration Sonny Diperri (Animal Collective, Portugal the Man).

Los Angeles-based Gabrielle Wortman and Jason Rosen, the duo that comprises Smoke Season, seem to form their own genre of music drawing on electro-pop, rock steady and soul.

In the past 2 years, Smoke Season has independently released an EP with a corresponding short film (which received features at 2017 Cannes Film Festival and 2017 Hollyshort Film Festival), and toured nationwide.

Their millions of Spotify plays and acclaim from major press outlets (W Magazine, Buzzfeed, Huffington Post, Clash Magazine, LA Weekly, and The New York Times to name a few), are proof that their sound is resonating with fans throughout the country. WEBSITE, FACEBOOK. 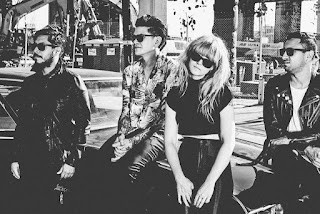 Background - Brass Box presents their video for "Moonlight Desires" The video was directed by Joey Halter, and plays with old school filming techniques. "Moonlight Desires" was originally written by Laurence Gowan, a Canadian pop star from the 80s who now fronts the band Styx. The track was released in 1987 under his solo project Gowan. After discovering the music video for the song was filmed onsite at Teotihuacan (Mesoamerican pyramids) in northeast of Mexico City, Brass Box felt the need to record a cover fo the track, as an homage to the native Canadian and the pyramids (especially after Ammo developed a slight obsession with Teotihuacan after visiting in mid-2013).

With enchanting dream goth/ shoegaze tracks, Brass Box takes listeners on a journey through life, death and the darkness that swells beneath the surface. The inception of this artistic force began with front woman Ammo Bankoff; her obsession with being lost at sea and the intangible as the makeup for her musical expression.

After demoing multiple songs, she contacted her long lost friend Neil Popkin to join her after running into each other at a seedy Echo Park bar. The duo had originally met several years prior at an underground new wave/ goth party in Los Angeles. The bands in which Bankoff played (Tête, Black Flamingo) occasionally shared bills with Popkin’s bands (War Tapes, Rituals). Due to their musical connection both musicians naturally collaborated.

Neil then brought in guitarist Matt Bennett (War Tapes) and drummer Pablo Amador (Rituals), to round out the heavy sounds of Brass Box. Since joining forces the quartet has assembled lush compositions of melody and noise while recording in their Downtown Los Angeles home studio. Some describe the sound as a mix between My Bloody Valentine and Cocteau Twins, but you can decide for yourself. BANDCAMP, FACEBOOK.

Maybe it's just the video but 'Moonlight Desires' has something of a psych feel, alongside the mixture of dream pop & shoegaze that compete with each other beautifully as the song develops. 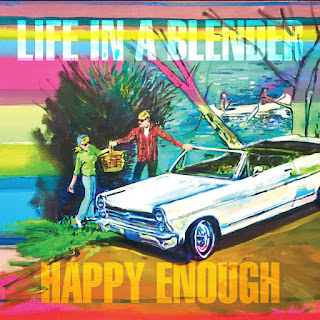 Life in a Blender - Happy Enough.

Background - For over 25 years, Life in a Blender has been the canvas for singer and songwriter Don Rauf's blackly comic landscapes. The group has released eight albums ranging from screaming punk to orchestrated chamber pop, and has brought the high theatrics of its live act to stages from Berlin to Austin to Toronto to Brooklyn and Seattle.

Life in a Blender (featuring Don Rauf of Seattle), squirreled away at Old Soul Studios in the summer of 2016 at Old Soul Studios in Catskill, NY, to record their most personal album ever.  Each CD comes with its own special tissue. In between endless bowls of pale pasta and bourbon from a can, a visibly distraught Blender committed their secrets to tape. Kenny Siegal manned the large recording knob.

In the title song "Happy Enough," lead singer Don Rauf laid bare the workings of his tortured innards. "Happy Enough is not for cowards," said Rauf, through three-day-old growth (not hair). "I hope you feel as bad as I did when I wrote it.

Some of the better songs are inspired by (not stolen from) other people's works of art. A few of the songs were written for the Bushwick Book Club, a project developed by the shimmering Susan Hwang.  The BBC forces musicians to write songs based on books and other written works. WEBSITE.

The title track & the first of ten songs 'Happy Enough' is a gentle opener. Be prepared for the incredible assortment of sonic brilliance that follows. Sometimes loud & full on, other times crazy, this is a fabulous collection of individual pieces that all battle to be the best! 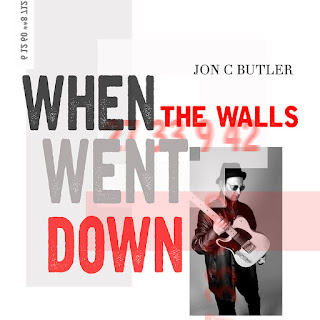 Jon C Butler - When The Walls Went Down.

Background - Jon C Butler is a writer and singer from Leicester, England who first came to attention with the classic album Shakespeare Alabama by Diesel Park West at the dawn of the nineties. With a particular awareness of the beauty and richness of sixties American west coast rock'n'roll the band were responsible for a clutch of highly invigorating albums from 1989 to 2011.

'When The Walls Went Down' is a contemporary take being filtered through time. Taken from Jon's  'brilliantly infectious' album Universal Stranger, the song is a sonic shoot along the decades since the Great Society.

“Well, my take on it at least”, says Jon. “I wonder if we could have got things together better than we have? I certainly think so, but you never know! Maybe this actually is the best we can do!” — Jon C Butler

The soul-searching resonance of the lyrics also take us into familiar territory for Jon - wrong turns and the passing of time. A deft reminder of those infrequent moments when, maybe, we should have let our emotional walls come down and allowed our hearts to rule our heads. 'When The Walls Went Down' is available from 10 November 2017 on Strataville. WEBSITE, FACEBOOK.

'When The Walls Went Down' has some thought provoking lyrics that are passionately delivered by Jon C Butler. Emotionally charged the song simply demands to be noticed, the accompanying video adds to the narrative, it's time to go & check out the album.