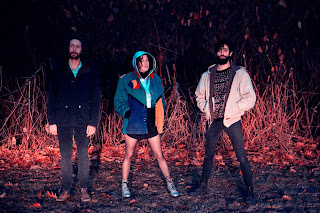 Background - Candy Ambulance are a high-energy band from upstate NY. They're gearing up to release their new EP Spray scheduled for release on February 18, 2018. The trio self-released their first single "Weekday" earlier this fall. Described as alternative grunge rock, the band pulls plenty of pop hooks and punk energy into their sound.

Formed in the summer of 2014, grunge-influenced Candy Ambulance of upstate NY are Caitlin Barker, Jesse Bolduc & Jon Cantiello. Lifelong friends and musical mates, Bolduc & Cantiello rescued Barker from a wealthy engagement prospect and whisked her away to the land of DIY punk. Poppy melodies, dynamic vocal changes and half naked live shows have solidified this rock trio as always entertaining, unabashed fun.

Boasting a healthy and frequent tour schedule the band has played with notable acts such as Screaming Females, Speedy Ortiz, Daddy Issues, and Dorothy. WEBSITE, FACEBOOK.

The second of six tracks on the forthcoming EP 'Spray' is 'Weekday' an often grungy Alt rock collection of material. The band do however vary their styles both in terms of mood, energy and the sheer amount of differing hooks along the way. The featured song is therefore more a glimpse of the band, and definitely not the only trick they know, if this song appeals, then the EP will delight.

Fronted by Arjun Viswanathan and Kostas Papadopoulos, Modesta is a retro R&B-infused indie rock duo with an electronic charm, thus offering a wholly unique and genuine sound unlike anything else in the independent music scene. Calling upon influences the likes of Roosevelt, The Shins, and Unknown Mortal Orchestra, Modesta’s style is rooted in musical diversity and experimentation.

Modesta, founded in the Boston area, has accrued almost half a million spins on Spotify, with over 15,000 monthly listeners. Over the last year, Viswanathan and Papadopoulos have built a home recording studio from the ground up, learning new ways to improve their craft and achieve a high level of creative control and artistic integrity with their work. FACEBOOK.

'VHS' opens with a layered synthy sound above gentle beats. The falsetto vocals add another dimension to this melodic and flowing song, the EP is awaited with both intrigue and anticipation!