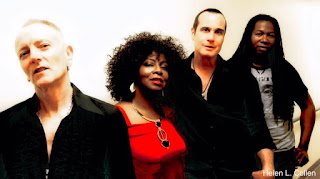 Background - Blues-Rock-n-Soul supergroup Delta Deep is thrilled to announce the release of their live CD/DVD East Coast Live on January 26, 2018 through Frontiers Music Srl which as an added plus will also be availble on vinyl. The East Coast Live CD is a full show performance filmed at legendary Daryl’s House in Pawling, NY while the DVD showcases select songs and highlights from that night. The label will also be re-releasing Delta Deep's debut album. The group, which made their chart topping debut in 2015, featuresPhil Collen, lead guitarist of Def Leppard,  Debbi Blackwell-Cook (back-up vocalist for such artists as Michael Buble & Gregory Hines), Robert DeLeo (bassist for Stone Temple Pilots) and Forrest Robinson (drummer for Joe Sample & The Crusaders, India.Arie & TLC).

Delta Deep’s self-titled debut was released in June 2015 entering iTunes Blues charts at #2. The band immediately hit the road performing at festivals and concert venues across the country. Critics lauded the band, with Elmore Magazine declaring, “Delta Deep is a rocking force due to bring down any house– historical or modern.”  While San Francisco’s BAM Magazine said, “the live experience for Delta Deep is one not to be missed…Debbi Blackwell-Cook is mesmerizing!”

The group originally came together when Collen was jamming at home with his wife's godmother, Debbi Blackwell-Cook. What started as a casual pairing, singing Motown favorites and classic blues when Debbi visited, quickly turned into much more.  Along with Collen's wife Helen, the three began writing original music together. Eventually Collen and Blackwell-Cook began laying down demos and the rest is Delta Deep history.

Collen, widely known to millions of rock ‘n roll fans for his iconic albums with Def Leppard, recently explained why they decided to put out this live album and DVD. "We recorded every night of our 2016 tours, east and west coast, expecting to pull out the best performances from different cities. But we managed to capture one of those special, magical nights where all the stars fall into place in Pawling, NY at Daryl's House. This whole album was recorded that night. It was so relaxed but we were so on fire at the same."  The musicians of Delta Deep bring their varying experiences from all corners of the music spectrum together to make a unique stew of blues-rock-n-soul.  Collen also adds, "The intention was never to have a DVD addition to the CD but seeing the performances live and the fact that Daryl's House also video records its shows was an added bonus for us." WEBSITE, FACEBOOK.

Blues, Rock and Soul are all rolled up together and performed live with total enthusiasm and style, on the East Coast Live album due in late January. From the opening salvo of Led Zeppelin classic 'Black Dog' the band take the audience through some fabulous songs including the new piece 'Bless These Blues' featured below. This is as you would expect from a band of this calibre, one very fine album. 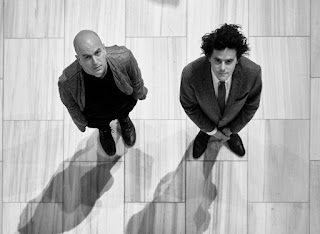 Background - Late Sea are not afraid to create music that challenges listeners to question and reimagine everything they know. Jerusalem-born singer and composer Izzy Gliksberg and his band craft lush, dynamic soundscapes that fall somewhere between experimental electronic rock and indie-pop. The band's new EP The Writers Trilogy explores this unique musical confluence. Gliksberg's cryptic lyricism, delivered in his trademark sing-speak style, fearlessly traverses the dark terrain that he and his bandmates create.

As the title suggests, The Writer's Trilogy is a collection of three original songs, that pay homage to literary giants Frankz Kafka, Paul Celan, and Baruch Spinoza. Gliksberg shares, "The making of the EP was literally reaching back to the writers that shaped my concept of what it means to be an artist and to have some sort of inner dialog with them. Every creative person is the sum of his influences: we immerse ourselves in the works of others, consciously or unconsciously, and then we process it into something that's our own. Sometimes we have so many ideas buzzing in our heads and all of them demand our attention and time. In a way,  when working on the EP I had the chance to give voice to many ideas at once - lyrically, musically and visually. In that sense it was a very satisfying process."

Each stunning track is accompanied by an equally impressive video, providing a visual component that helps to reinforce each songs narrative and sonic impact. Part one "Ring the Bells" and part two "The Great White", previously released, are chock-full of thought-provoking themes and imagery. The third video, for "Hunter" will be released in January 2018, continuing and fulfilling the mysterious and mythical themes found throughout the series. Passionate about combining music and visuals, Late Sea creates a new level of powerful and transformative art.

A fourth track provides a reimagined cover of Simon & Garfunkel's 1964 hit "Sound of Silence," for which a music video was released yesterday. Punctuated by Sam Nester's ambient trumpet lines, the somber rendition of the track is paired with sobering images of nuclear war and political propaganda. The cinematic tone of the music combined with the stark imagery conveys a sense of impending doom. Over fifty years after the original release, Late Sea manages to breath new life into both the music and interpretation of the message. The video features animation by international award-winning animator Yulia Ruditskaya. WEBSITE, FACEBOOK.

Imaginative and creative, 'The Writers Trilogy' is a beatiful collection of four quite unique songs. The music is intricately developed and supports the atmospheric vocals, alongside intriguing lyrics that demand attention in their own right.