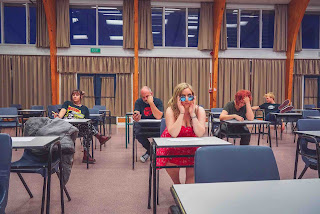 Background -  New Zealand outfit DateMonthYear has announced their forthcoming single 'March' on the trail of their well received single 'Numbers', released earlier in 2017. On both of these releases, the band tastefully combines pop melody and rock dynamics with a cinematic atmosphere, calling to mind such artists as Low, Cat Power, and Sharon Van Etten.

Based in Hamilton, DateMonthYear is a five-piece comprised of Trevor Faville, Emma Koretz, Brooke Baker, Hayely Schwass and Tyler Leet. 'March' eludes to the process of grief and loss, delivering a strong message with hard-hitting lyrics, music and video. The band worked with local production team Bad George in Hamilton to produce and film their new music video.

"The lyrics in 'March' reflect the the transition from grief to hope when you lose someone suddenly. The shock when someone passes, and the questioning of your own identity and purpose, and then the point when you start to look forward again - whether it be in the sense of a traditional faith, or just about reconciliation with how life is. I think its quite a positive song, ending on an uplifting note," says Trevor Faville. “The song itself is quite different to our last one, musically. It’s a lot more dramatic and has dynamic changes involved. It’s something more of a big rock song. It is a completely different topic lyrically but probably just as intense.”

This release follows up their most recent single 'Numbers', which reflects on today’s society and how people’s lives revolve around numbers – those of your mortgage or rent, income, supermarket shopping and simply hoping that you have enough to pay for groceries and bills each week.

Shunning traditional band formats, DateMonthYear’s structure means that “commitment is defined by contribution”, allowing for new ideas and influences. The fluidity of the line-up ensures a smorgasbord of musical flavours. The band is already working towards their debut album release, focusing on songs addressing issues that need to be spoken about, rather than being a distraction from what is actually going on in the world. FACEBOOK, WEBSITE.

An expansive rock music landscape ebbs and flows with power and restraint on 'March.' The song has some beautiful duel vocals adding feeling and melody to this formidable and compelling track. 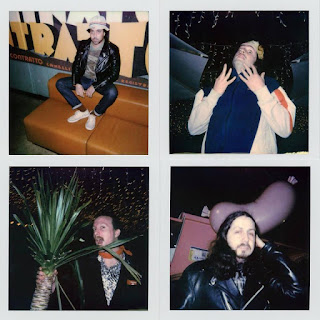 Background - NYC's Dirty Fences rolls out US tour in support of "Goodbye Love". Grab a thirty rack of Pabst, a liter of cheap whisky, and call up the boys because “New York City's favorite hard-workin' rock n' roll band” Dirty Fences is back on the road in the USA and ready to party down in your town in 2018!

The band will kick off a thirty-two city long haul tour in support of "Goodbye Love" via NYC’s own Greenway Records, the band’s third studio album and comes as a follow-up to 2013's Too High To Kross (Volcom) and 2015's  epic Full Tramp (Slovenly). The album is available on limited-edition splatter vinyl, cassette, CD and digitally.

Dirty Fences is a quintessential New York band: the kind the city is known for producing; the band you’d want to hear blasting out the PA at some dive bar that is beyond capacity before they even take stage. They often refer to themselves as a gang, and that mentality is evident in every meaty riff and perfectly-executed harmony on Goodbye Love. It’s a perfect slice of wax that evokes early American rock and punk acts such as Redd Kross, The MC5, and Johnny Thunders — whilst showing an obsession with early KISS and Motley Crüe through the lens of The Dictators and Ramones —yet the band still manages to maintain an identity all its own this new record. WEBSITE. 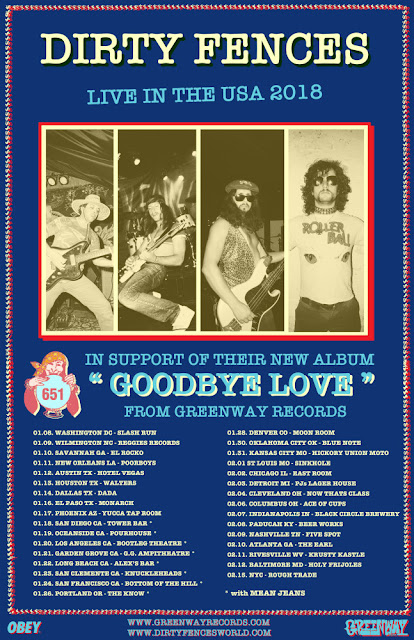 'One More Step' is a swaggering rocker with gorgeously gutsy and commanding duel vocals. Primal and natural rock & roll, I would imagine based on this song alone that those going to any of their tour gigs will be for a feast of raw rock music.