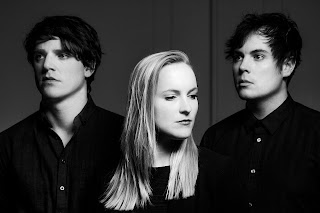 Port Cities - On the Nights You Stay Home.

Background - Port Cities’ music is a perfect balance of Nashville (where much of it was recorded) and Nova Scotia (where the band reside); of the rustic and atmospheric, of indie intimacy and the sort of arena-pop anthems that betray Port Cities’ globe-trotting ambitions; 2018 sees the band embark upon their second cross European tour, including a timely stint here in the UK, where their following is building up nicely off the back of 2017's visit, and the hugely successful #PostcardsFromPortCities series of videos.

A port city is a place where cultures and histories collide, where goods and ideas are imported and absorbed into the local bloodstream. Not entirely un-coincidentally, Port Cities the band is the musical equivalent; a melting pot of three of Canada’s most creative individual talents, drawn together to make an entity even more outstanding as a group than as its constituent parts.

As with any form of musical collaboration, the magic occurs in the blending of one element with another, but unlike most groups, Port Cities never started out to be a band. Comprised of trio of celebrated Nova Scotian musicians Carleton Stone, Dylan Guthro and Breagh MacKinnon, Port Cities were drawn together through songwriting as independent artists, with every intention of crafting new material, and then going their separate ways. Yet that is not quite how it panned out.

The first thing anyone observes when hearing Port Cities is that this band is tight. Seriously tight. Yet it begs the question; How to go about fusing divergent styles and experiences into such a singular rootsy Americana sound? From MacKinnon’s silky jazz-schooled timbre, allied to Guthro’s R&B influenced natural tendencies and Stone’s acoustic troubadour, the space in between the three is delightfully warm and resonant, yet entirely coherent across the course of their self-titled debut album, due for imminent release in 2018. FACEBOOK.

We featured Port Cities last August and a number of forthcoming UK tour dates seems as good excuse as any to share another song from the band, such as 'On The Nights You Stay At Home'. Filmed on the Brighton waterfront while at The Great Escape last year, it's another refined indie pop song with good old hints of Americana and a fine level of buoyant energy.

Background - Black Mamba is a female fronted Rock trio from Viterbo (Centre of Italy). Coming from different musical backgrounds, the band has developed on stage an high-voltage, extremely technical and eye-catchy show.

Heritage the new album is ten characters, ten songs flowing through the river of experience. All of us are carrying something like an indelible heritage. Sometimes these experiences are bad, and the only solution is to scream and throw them out like a swarm of butterflies coming out from the stomach. We can represent instrumentally the album and how the Black Mamba conceive their concept of the band, as two large gears formed by bass and drums that rotate and run tirelessly with syncopated rhythmic joints that put the listener's feet well glued down to the ground while the world around is collapsing.

The guitar arrangements will stick you in the real world while a tornado is disheveling the landscape in the distance. The vocal parts are like a mermaid singing while all these things happen and the concept of this album is burned into listener's skin. Bass, guitar, and drums solos color this painting and enrich the tension and resolution music effect of the entire album of the Italian female-fronted trio. WEBSITE, FACEBOOK.

'Loop' is taken from the bands 'Heritage' album released a couple of weeks back. It's a fair representation of the album where full on rock is the norm and even on the odd occasion when the band reduce the pace, the levels of energy and dynamic presence is retained. Uncompromising rock & roll delivered with the potent power, rock trio's are renowned for.

Andy Miles said…
Black Mamba's Heritage album is a breath of fresh air. And talking of air, this one is sure to get airplay on Albumheads