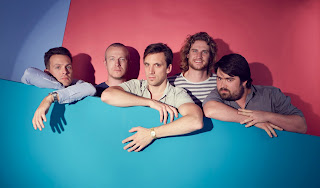 Background - Amidst the cultural detritus of television’s after hours rises a freaky new street beat played by London’s Late TV. Culling influences from jazz cats and art rockers, B-movies and trash television, via Lynch and Tarantino, Late TV are the moonlighting house band for a surreal all-night dream club where the intangible dance floor shifts and folds to become the set piece of a talk show beamed onto the farthest reaches of your channel selector. Helmed by Luke J Novak, who hails from the slabbed post-industrial backwater of Kidderminster, Late TV originates from a folk noir group formed by Luke and Richard ‘The Showman’ Bowman, a drummer whose restless search for groove quickly outgrew their genre.

Joined by Chicago’s jazz fusion obsessed Ryan Szanyi on bass, Parisian keyboard maestro Martin Coxall, tenor sax player Evesham Nicholas, and Matthew Halsall (whose bionic heart valve’s separate mic-detectable rhythms occasionally cause problems in the studio), their new outfit Late TV harks back to a time when music was all fearless fusion and intractable improvisation. In the postmodern wastelands of pop they’re the high-brow/low-brow mutant junk dwellers, collecting the shards of our fragmented culture and building something both irresistibly dangerous and dangerously irresistible.

"It came together as an abstract meditation on that element of the human condition that’s always searching for something unattainable, possibly because it doesn’t exist. But we are playing a game, and we are destined to lose it.”

After the triumph of last year’s ‘Citizen’ single, Late TV have crafted a thematic companion of sorts in ‘Losin’ It’. The rhythm section’s grooves will seize your jiving body back into their neon dreamworld, a lurid post-pop-culture dystopia where the fundamental human quest for the ineffable is realised in surrealistic paranoiac lyricism and jazz parlour instrumentation. Sonically, ‘Losin’ It’ can best be described, in the words of the late Bowie, as ‘plastic soul’ - the Thin White Duke’s epithet for the kind of jazzy avant-garde funk & roll of Young Americans. As Late TV’s recent output suggests, there’s still a space for organic ensemble songwriting in a growingly disposable sonic landscape. Maybe that’s their grand irony. Named after the most disposable form of entertainment for the pre-internet generation, they’re here to remind us that everything has the potential to live on indefinitely, whether that’s trash TV, or a song you can really lose it to. FACEBOOK.

A funky riff is quickly followed by additional layers of Jazz rich instrumentation. The vocals liven the song up even further and 'Losin’ It' is quickly pummelling hooks galore into my ears, upbeat and gorgeous hooks. 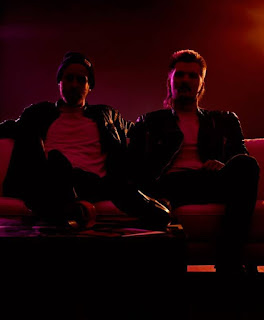 Background - Danish alt-rock duo PBSM recently dropped their second EP 'Dance Floor' - a five track release that has given them a staunch reputation as a contemporary danceable, dark and cold duo offering a perfect soundtrack for going clubbing incognito. PBSM are now ready to reveal the video for the EP’s title track which features TED Talk star and Boston Marathon survivor, the All-American dancer, Adrianne Haslet. Adrianne perfectly complements the theme of the song that revolves around going to your happy place, and portrays her battle in getting back to the dance floor after losing her left leg in the tragic Boston Marathon bombings in 2013.

The song initially took form in a basement in Kreuzberg, Berlin where the duo had arranged for a jam and recording session with British, drummer Joe Dilworth (Stereolab, Cavern of Anti-matter). Upon returning to Copenhagen PBSM finished up the recordings and further assistance on the drums was provided by Lasse Herbst (Fallulah, Spektr, Choir of Young Believers).

The film production company Mellow CPH got involved and the idea of bringing in a dancer as the main character telling the story of the song was born. PBSM explain, “We reached out to American dancer Adrianne Haslet to hear if she by any chance would consider flying out to star in our music video. Which she did. And since being told that there was a one in a million chance of ever dancing again after she lost her leg in 2013 she has been struggling to get back to the dance floor - determined to beat the odds. Which she did.”

In 2015, Adrianne danced the foxtrot on the Boston Marathon finish line, in 2016 she crossed that finish line as a runner, and now she appears in PBSM’s music video for their new single “Dance Floor.” In the video, Adrianne shows off her talent, but doesn’t shy away from the difficult (but necessary) parts of healing. When sharing her story, Adrianne is very open about her struggles with the anger and depression that come along with the grieving process, along with her constant striving for progress. These themes come across clearly and poetically in the video as we see Adrianne’s low points intersperse her beautiful, graceful movements. FACEBOOK.

There is an inspiring story line that accompanies 'Dance Floor,' so much so that, the song and video are intrinsically linked. The music is refined and flowing in it's own right, the vocals add additional feel, collectively this deserves to be seen and heard. 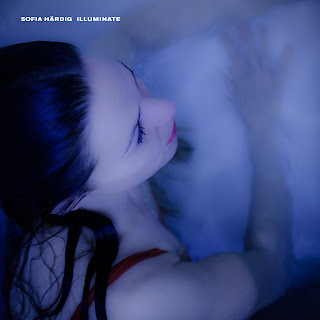 Background - Sofia Härdig’s radiant new single, “Illuminate,” is a fitting addition to the 80’s-themed Drive soundtrack.  Deep glowing synths and echoing vocals take the wheel on a late-night cruise. The track builds with subtle guitar rhythms that scream at times like screeching tyres. Lyrically, the song explores loneliness and a seemingly endless search for “another heart”. Driving through the night, she looks skyward to navigate the road to a new love. It’s a contemplative rocktronica song that demonstrates Sofia’s tight control over her craft.

Sofia Härdig lives up to her “rocktronica” reputation with her new single, “Illuminate”. Championed by Belle and Sebastian’s Stevie Jackson, she has worked with major Swedish artists including Grammy Award winners The Hellacopters and bob hund. Furthermore, she has collaborated with Yoshimi from Japanese noise-rockers Boredoms and the alternative indie band Free Kitten. Sofia’s experimental nature shines through with her new material that blends rock and electronic influences.

“I worked with the song Illuminate alone in my studio for many long, lonesome nights. It was just the studio, the stars and I, while I played all the instruments, made the soundscape and recorded the single in solitude. Later, I invited over some friends to improvise over the track. Guitarist John Essing and bass player Mats Hellquist, both from the band ‘bob hund’, but also a classical pianist and cellist respectively, added parts to the soundscape of Illuminate. I brought all the new recordings back into the studio - tore them apart, rebuilt them and made arrangements, as if I was a mad scientist in my lab. I then brought in Jari Haapalainen to produce the songs. The solitary fashion in which Illuminate was crafted reflects the mood of the single.” – Sofia Härdig. FACEBOOK.

We featured Sofia Härdig a couple of times back in 2016 and she makes a welcome return with  'Illuminate'. Powerful synths and a determined beat make a gorgeous backdrop for her intoxicating vocals, as the song merges elements of rock with swathes of electronica.