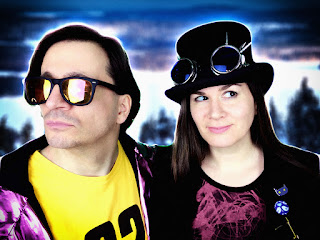 Founded in 2001, Spray is comprised of Ricardo Autobahn (synthesizers) and Jenny McLaren? (vocals, guitars), both formerly of the Cuban Boys, who took their chaotic technopunk to number 1 on the Festive 50 (twice), recorded one of the best Peel Sessions ever and went head-to-head with Sir Cliff Richard in a Christmas Chart Battle (but ultimately lost). Their hit single 'Cognoscenti Vs Intelligentsia' (a.k.a. 'The Hamster Dance Song') sold a million copies, reached number 4 in the UK single charts, landed them on Top of the Pops and, in the words of John Peel, was “the most requested song I’ve had since 'God Save The Queen'.

In a mathematically constructed list presented by RockListMusic.co.uk, the Cuban Boys registered as the 30th most popular band in the history of the John Peel Show, ranking ahead of the Inspiral Carpets (31), The Cure (34), Nirvana and The Stone Roses (=tied at 35). BBC producer Mike Engles selected the Cuban Boys' first Peel Session as one of his top 10 all-time favourites, alongside Nirvana, The Damned and Ivor Cutler.

'Anthologised by Cherry Red' came about after a chat Ricardo Autobahn had with a fellow musician. When asked what he was currently up to, he uttered the beautiful phrase “oh, I’m at that stage in my career where I’m being anthologised by Cherry Red”. A lot of Spray’s inspiration and ideas come from everyday comments and this went straight in the band notebook.

"The song is not a critique of Cherry Red as we're actually big fans of the label. It’s more a straightforward story song about a fading rock band finding success in their twilight years," says Jenny McLaren. "It’s also an observation about the state of the music industry. If the business is based on catalogue reissues, where are the catalogue reissues of the future going to come from?" BANDCAMP.

Spray are just bubbling over with catchy vibes on 'Anthologised By Cherry Red', a song that despite it's upbeat nature, does make some very relevant observations regarding today's music business. That said I reckon it will make you smile just as much as it might make you reflect on deeper matters. 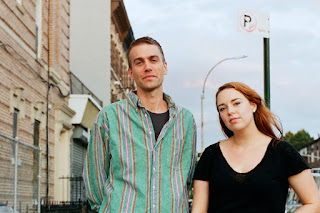 Background - Brooklyn based duo Pollens have recently released their latest single “$$$_PSA” via Emerging Indie Bands. The track displays offbeat, conversational delivery, dense polyrhythms, layered themes, drum machines, and dynamic arrangements that will leave you wanting more. It is through Jeff Aaron Bryant and Elizabeth “Emay” May’s brilliant lyricism, which contain ‘lists’, that has their listeners on the edge of curiosity.

We all want to know the meaning behind the song we listen to...or is there a meaning? Pollens have confirmed that their “songs aren’t about anything...that’s a promise.” For this track, “$$$_PSA”, focuses on a “few flavors of moneyed people- their entitlement, the space they’re taking up on the train, their shoes and conversations, and every so often we hear someone else making an announcement,” says Pollens. Their eccentric way of seeing the world can change our perspective on everything!

They check out all the “affluent” people on the train and are making their own announcement. Give it a listen and challenge yourself to never hear anyone over an intercom or public address system the same as you had before. Says Emerging Indie Bands, “it is only a sadness it has taken this long for me to get around to introducing their avant-garde creativity.”

Pollens belong in a world where guitars are not needed, lyrics come off as ‘lists’ to be shouted, not sung, and songs lie on a bedrock of intricate, yet visceral percussion. There are too many artists who tend to overthink things- aesthetics, sound, lyrics- but it all comes naturally to Pollens. With music originating back to 2008, Pollens has grown and been compared to notable artist such as tUne-yArDs and Animal Collective. Their music is truly avant garde. There is no norm. There are loose parameters, bursts of neurotic energy tempered by melodious breaks, but then back to it- a pulsating undercurrent layered to perfection and we find ourselves completely immersed and engaged.

If there is one thing you can learn from this duo, it’s that you don’t need a big band to make yourself heard. According to Jeff, “with a tiny band, we’re totally free to explore sparse, dumb, over committed ideas without a lot of risk or investment.” FACEBOOK.

The song title gives us a pretty good hint that '$$$_PSA' is going to be different. It's also intriguing and yes the claim of being "avant garde" is not without substance. Most of all though this is gorgeously addictive and massively refreshing and the bonus is this type of Pollen doesn't make me sneeze. 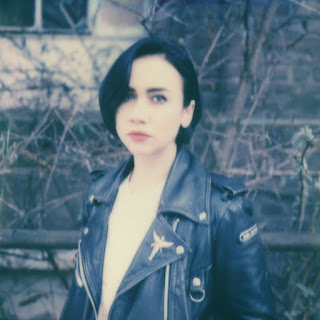 Background - Berlin-based artist, Laura Carbone, takes the darker path on this shoegazy new single, "Tangerine Tree."  Her eagerly anticipated second album, Empty Sea, is set for release June 8th, 2018 on Future Shock Records in Canada and the USA. "To me, this song is like a vivid dream inviting you to dive in and float in it for a while.  It gives the comfort of a familiar feeling that keeps on visiting you once in a while in your sleep.  It's a temporary feeling -- it'll be over and that's fine." -Laura Carbone

Fresh off her recent tours with Jesus and Mary Chain, INVSN, and The Pains Of Being Pure At Heart, and performing two consecutive years at SXSW in Austin, Berlin's dark starlight Laura Carbone is excited to unleash her sophomore follow-up to the 2016 Sirens.

Written in Los Angeles and recorded at the infamous RAMA Studios with Christian Bethge, you can hear the noisy transatlantic influences of the now Berlin-based darkstar. Listening to lots of Nick Cave while on tour with The Jesus And Mary Chain was an influence in developing the sound for the new record; but the noisy feedback and heavy reverb on tracks such as “Cellophane Skin” and “Crisis,” is balanced with more harmonious numbers on the album, among which are “Tangerine Tree” and “Lullaby.”

The album title Empty Sea comes from the Brother Grimm's fairy tale "The True Bride" in which a kidnapped princess must empty a lake with a spoon full of holes. "There were moments when I really doubted myself as I had some blocks, retreating to LA to write really gave me the courage to get the album together, the experience of overcoming doubt made me think about the girl with the spoon." WEBSITE.

'Tangerine Tree' is dreamy and has something of a lighter shoegaze feel to it, the vocals are well up in the mix however, adding melodic overtones along with some emotional pull. It's a captivating song, Laura Carbone's musical influences have added to her creativity rather than taken over, the album will be well worth checking out.