The Special Pillow - The Orange Peels - Umbra & The Volcan Siege 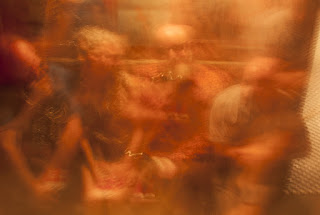 Background - For the past two decades, The Special Pillow have operated from the margins of the marginal, creating a distinctive string-driven sound—a heady brew encompassing concise ’60s-flavored pop gems, dreamy psychedelic reveries, and a propulsive drive redolent of the antipodean indie acts of the ‘80s. In 2015, Yo La Tengo shined a light on the Pillow’s shadowy demimonde with their cover of the band’s “Automatic Doom.” Now, The Special Pillow unleash Sleeping Weird, their senses-shattering sixth album.

Since the dissolution of cult heroes Hypnolovewheel, songwriter and majordomo Dan Cuddy has played bass with such notable combos as Sleepyhead and XL Kings, but has reserved his own compositions for The Special Pillow.

Sleeping Weird is the group’s third project with engineer Mitch Rackin, recorded and mixed at Brooklyn’s Seaside Lounge recording studio. Featured players are charter Special Pillow member Katie Gentile (Run On, Mad Scene) on violin and viola; longtime collaborator Peter Stuart (Headless Horsemen, Tryfles) on a staggering arsenal of guitars; and Eric Marc Cohen (Fly Ashtray) on drums and percussion. All the band members contribute vocals, and the ensemble is enhanced by the keyboards of Ariella Stok (Sloppy Heads) and horns courtesy of Steven Levi and Cheryl Kingan (The Scene Is Now).

A much-abused hyperbolic trope of recent years posits that a given work of art has special resonance with “the way we live now” or is needed “now more than ever.” We won’t attempt to convince you that Sleeping Weird is such a topical watershed. The Special Pillow are in it for life and their lives are reflected in these songs: The days are getting dark and they want a way to keep the world at bay, sweep everything under the rug, and retreat to a cryogenic tomb. But it’s getting older every day and they’re concerned about it and it seems as though their skulls may burst into flames if they don’t speak out loud. They’re floating on, and singing. WEBSITE.

'Hudson River Dreamboat' is a fine example of 'Sleeping Weird' an album consisting of eleven finely crafted songs. The Special Pillow's musicianship is of a high calibre, the vocals and harmonies polished and melodic. However it's the natural feel, the differing levels of energy and brightness, and variety, that makes this collection really stand out. 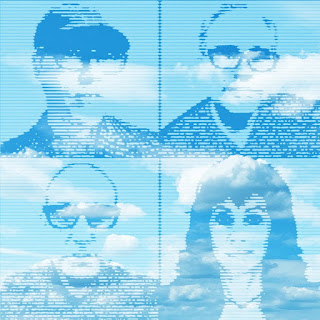 Background - If The Orange Peels got paid each time a music critic said, “It’s the kind of music that makes you feel like you’re speeding down the Pacific Coast Highway with the top down,” they’d be billionaires. The Orange Peels formed in 1997, rising out of the ashes of Allen Clapp and his Orchestra—whose debut album 100 Percent Chance of Rain was heralded in the heyday of the burgeoning American indie-pop movement.

The band has featured members of The Mummies, The Ocean Blue, Half Japanese, and Continental since its inception, and has never stopped evolving. In this decade, the lineup has solidified with Clapp on vocals, guitars and keyboards; Jill Pries on bass; John Moremen on lead guitars; and Gabriel Coan on drums. This incarnation is now into its third album together, exploring ever more sophisticated pop landscapes while keeping melody as its North Star.

Clapp’s ear for pop magic has landed his tunes and vocals in major ad campaigns for Coca Cola, Target, and Samsung. On the band’s last tour opening for Matthew Sweet in the summer of 2015, Sweet fell in love with guitarist John Moremen’s playing during the soundcheck for their first show together. The next two years would see Moremen recording and touring with the pop legend leading up to the release of Tomorrow Forever.

On its 7th album, Trespassing (April 2018, Minty Fresh), the band doubles down on melody and experimentation making perhaps the ultimate Orange Peels album. Recorded at the band’s redwooded retreat in the Santa Cruz Mountains, it’s a study in contrasts—organic outdoor drums vs. programmed digital computers; tack pianos and string quartets vs. icy synthesizers. After all, they’re looking at life from both sides now. In the dawn of 2018, it almost feels like the world is finally ready to discover The Orange Peels. WEBSITE.

'Trespassing' is a gorgeous album and being able to share it in full, makes describing it less of an issue. Right from the opening song 'Camera 2' my anticipation was set very high and the band fulfil that promise with style and beauty. Describing the collection as Indie pop feels like something of an understatement, calling it future gold is to cheesy and an over used expression, pressing play, kicking back and immersing yourself, is the best option, and by far... 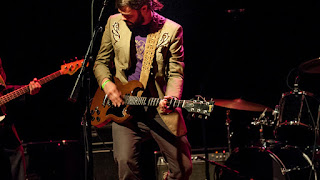 Umbra & The Volcan Siege - Someone Will Love You But Its Just Not Me (Album).

Background - Chicago psych collective Umbra & the Volcan Siege have released their fourth full-length on vinyl, cassette (via TMB Limited) and for digital download.

The album features bandleader and multi-instrumentalist Jim Licka (The Luck of Eden hall) accompanied by a core group of musicians (Curtis Evans on guitar, Russ Mallord on drums, Pete Trillo on bass) and joined by guests from the bands Blood People, Oh My God and The Luck of Eden Hall on various tracks.

Umbra and the Volcan Siege was founded in 2006 by Jim Licka embracing his "super hero ultra-identity" as Umbra.. Umbra is surrounded by his siege of musicians which help create a sound-scape of genre bending music.

Umbra and the Volcan Siege has released 3 albums and have now released their 4th "Someone Will Love You But It's Just Not Me". WEBSITE.

Psych rock and a whole lot more, 'Someone Will Love You But Its Just Not Me' is a delicious collection of brand new rock and roll, that deserves the "timeless" accreditation. In fact the band visit so many differing points within the rock genre directory, that I am relieved to share the whole album. From psychedelic to blues to prog and more, there is something for every rock fan, the fact that this collective are just so good, really does seal this deal.