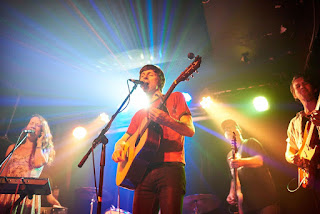 “Entropy,” the first single from our forthcoming record, explores the importance of human connection in a disintegrating world. Technologies designed to bring us together are tearing us apart and destroying our physical realities. “Entropy” is a reminder to connect in the moment.

Set for release on June 15th, Humanizer continues to explore the relationship between humanity and technology. I’ve watched the music industry change from the inside over the past 20 years, and reflect what I’ve witnessed on our new album. Humanizer was recorded straight to analog tape at Revolution Recording in Toronto. FACEBOOK.

'Entropy' mixes indie pop and folk together with some refined vocals and harmonies and a polished musical arrangement. The lyrics are thought provoking and with more material on it's way this is a really good introduction to Mercy Flight.

H.C. McEntire - Baby's Got the Blues.

Background - H.C. McEntire Invites her family and community into frame for her “Baby’s Got the Blues” music video.

Back stateside after a trio of sold-out shows in London, two of which were supporting Angel Olsen, H.C. McEntire is sharing a new music video for “Baby’s Got the Blues” off her stellar solo debut, Lionheart.

Director Jared Hogan on creating a visual for the song: "In talking with Heather, we knew that we wanted this video to touch on universal wounds of depression and suffering, but established in a more poetic narrative. We also knew we wanted family and community to play an integral role. All of the subjects in the video are connected to Heather’s life in one way or another, and that was very important to us. The song strikes this beautiful balance between darkness and hope, and we wanted the video to do the same." WEBSITE.

Americana roots vibes course there way through 'Baby's Got the Blues' an earnest and pleasing song. The accompanying video adds further interest, to what is a very engaging track from the 'Lionheart' album. 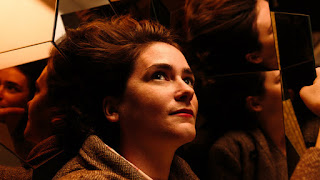 Background - Austin-via-Alabama songwriter Caroline Sallee aka Caroline Says has released a video for “Mea Culpa” to announce US summer dates with label mate Jessica Risker.  “Mea Culpa” is featured on the second Caroline Says album, No Fool Like An Old Fool, which arrived in March on Western Vinyl.

Discussing the video’s creation, Caroline stated:  I made this video with my friend James Pritchard. I asked him to film it because I liked his instagram photos (@________._____.___.__._._). He told me he had never filmed anything before, but we went for it anyway. We decided to make a video that was entirely shots of reflections of water. We spent 2 days  wandering around looking for different puddles and creeks for him to film my reflection. I think James bought a camera that shoots video after we made this music video.

Sallee recorded No Fool Like An Old Fool while simultaneously working three jobs – finding the time was no easy task and her living situation didn't make it any easier – a dank, mildewed basement apartment with noise from her landlords above bleeding through all day.  The hurdles she navigated to record naturally led to ad hoc recording techniques, and endless sonic experimentation, often leading to her use of the computer as an instrument.  Sallee loosens her earthly tether with No Fool, allowing her songs to float to ever higher altitudes on clouds of loops, immaculate melodies, and hypnotic harmonies, as she sings about aging, the daily grind, and hometown stymie.  Lyrics were inspired from an array of sources, including the 1971 film ‘Panic in Needle Park’ and the idea of being in love with a heroin addict.  A NPR story about a young Iraqi man who was killed in an ISIS bombing just before moving to New York City to become a professional dancer.  Terrence Malick's ‘Badlands’ and Bruce Springsteen's Nebraska.  While the song “Black Hole" features multi-voice harmonies sung from the perspective of 50's spree killer Charles Starkweather.

No Fool Like An Old Fool is a fine soundtrack for a kind of liminal state… honest in its weariness, glad to be done with the day, carrying itself into tomorrow with a bleary-eyed sense of wonder and hope for the future. FACEBOOK.

Gentle vocals and enchanting harmonies are supported by a simple and primarily acoustic backdrop on 'Mea Culpa', one of those songs that allows the hooks to subtly work there way in.

Background - Rat The Magnificent share new single 'Olon'. Made up of members of Family Manderson, Sunshine Republic, KLLR, Hot Sauce Pony, Modern Men and Brenda, Rat the Magnificent are a heady mix of obstinance and oblivion. Think an overlapping of a Venn diagram made up of Jesus Lizard, Sally Bowles, My Bloody Valentine, Slint, Oxbow and Son House and you’re in the right borough.

The trio’s cacophony of beguiling yet unnerving fuzz-laced experimental noise rock has earned the group a reputation as a must-see live act, having played with the likes of McLusky, IDLES and Adam Betts. Not least, they have also previously recorded with Steve Albini earning the rare would-be plaudits of “I’d have no problem with you being my house band.” Now with an EP and several singles to their name, Rat The Magnificent are set to release their debut LP, ‘The Body As Pleasure’. A collection of 10-tracks that fully encompass the raw, unhinged energy and dark melodic sensibilities that have garnered them much acclaim in the past.

However, like all strong drinks - the whiskey, the coffee - you need balance in strength. The core trio of Anderson’s open blasted guitar checks primitive tradition and bleeds into Davies’ evangelical bass and Dodridge’s fervent drum rhythms, providing a bed for Anderson to belie his vocals. Brooding in white hot intensity, the albums lyrical content tackles personal yet assimilable topics such as the immediacy of desire, animal magnetism, familiar high-stakes anxiety and trial by fire learning. Dexterous vocals layer often voyeuristic glimpses into both the bands misfortunes and success, backed up by oblique and often deceptively catchy instrumentation.

The band celebrate their influences in a caustic yet melodically conscious manner that is both familiar and new. The influences run fast and loose throughout the record, from the direct power and languishing darkness of Swans, Sonic Youth, Peaches and The Birthday Party, right through to 60-80s New York minimalism a la Tony Conrad and La Monte Young. Almost all of the tracks contain microtonal elements; from the bends in ‘Marrtalon’, to the rising synths at the end of ‘The For’, to the guitar gradually riding “out of tune” on ‘The Inevitable’ - The devil is in the details.

Our second helping of Rat The Magnificent and 'Olon' confirms that this is a band who can do full on rock & roll swagger with both style and intensity.