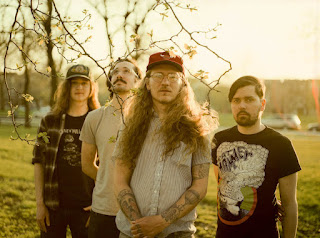 Background - Chicago based indie rock band Sonny Falls shares the lead single "Easy To Lose" off their forthcoming LP Some Kind Of Spectre, due out 8/17 on Sooper Records (Nnamdi Ogbonnaya, Sen Morimoto). On "Easy To Lose" the band addresses the way a toxic situation can be all-consuming. It is about codependency in all forms, like addiction or an unhealthy relationship. The rest of their forthcoming album deals with the same themes. Over 10 tracks, Sonny Falls’ Some Kind of Spectre finds songwriter and frontman Ryan 'Hoagie Wesley' Ensley exploring the nuances and complexities of relationship; whether with a person, a drug, or even just a mindset.

While the album contains explicit references to heroin and the opioid epidemic, metaphorical lyrics create space for the listener to insert their own meaning. Hoagie makes obvious reference to particular issues that have plagued he and his loved ones, but the flexibility of interpretation also highlights the archetypal nature of human struggle. Despite the drastic differences between people in the world, there is space for empathy in the commonality that we all have Some Kind of Spectre.

Sonny Falls is the song-writing project of Chicago DIY veteran Ryan “Hoagie” Wesley Ensley. Disarmingly personal in his presentation, Consequence of Sound once described Sonny Falls as “the sound of a songwriter struggling to assert his own agency in a world that refuses to do him any favors.” Hoagie’s writing gives voice to a depleted notion of modern Americana saturated by fortuneless upbringing, tragic devotion, and the untold losses of the opioid epidemic. These themes recur honestly and without pretension in his writing; erected as dark windows into the soul of songs that nonetheless break glass to let the sunshine in. Dire narratives are beset by a survival instinct of unrelenting optimism, and are delivered with a graceful balance of honest guitar rock and soulful self-expression. The result is that special kind of timeless indie rock. Bands like Built to Spill and Neutral Milk Hotel are strong points of reference not only because of the familiar sonic territory but because, like those bands, Sonny Falls is a project that listeners might fall in love with forever.

On 2018’s Some Kind of Spectre (Sooper Records), themes of codependency and addiction underwrite melancholic sing-alongs extruded through a foundation of blistering guitar rock. The rhythm section of drummer Calvin Schaller and bassist Jeff Perlman joyride with the signature lead guitar of Anthony Santoro to rocket the songs light years beyond the domain of singer-songwriter tropes. Notable horn and string arrangements feature prominently in the album and shine as a definitive symphonic element. The result is an epic of honesty presenting as the masterwork of a talent screaming to be heard. Bleak but optimistic, Some Kind of Spectre is an ambitious work of pop-rock brilliance that urges the recognition of Sonny Falls as an authentic and substantive voice in the landscape of American rock music, FACEBOOK.

'Easy To Lose' is a sturdy rocker, with bags of energy and vocals that ooze rock and roll credentials. The video adds a layer of good feeling to the song, with or without the images, this is one fine blast of natural rock music. 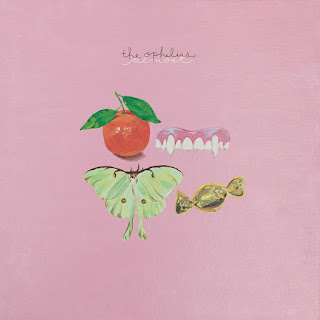 Background - The Ophelias have just shared the new track and video "Lunar Rover." Through a blend of understated rock, baroque pop and wide-skied atmospheres, The Ophelias explore the juxtapositions of youth on their album, Almost.

Produced by Yoni Wolf, the new album Almost glides between palatial assuredness and pallid introspection, looking back on youthful yearning — the uncertainties, the traumas, the anxieties — without discounting its soft beauty. The Ophelias steer Almost through the lineage of coming-of-age confessionals, and affectionately document their growth into a warm, fractured adulthood. TWITTER.

We featured 'Fog' in May, 'General Electric' in June and now were in July 'Lunar Rover' makes it's timely arrival, increasing our anticipation even further for The Ophelias new album 'Almost'. Well three in a row is all down to the bands unique and fascinating creative works, which have consistently grabbed my attention. The latest song is another mixture of baroque meets low key rock, the vocals add more dimension and depth, this is very impressive and pleasing material.