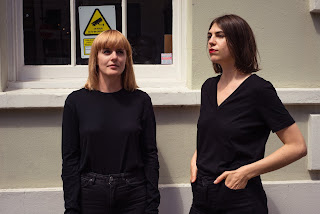 Background - London-based “Anti-Music Collective” Moderate Rebels release ‘Beyond Hidden Words’, from their just-completed second album, due out in November on Everyday Life Recordings. Describing it as an ‘un-song’, Moderate Rebels say, “We’re not sure what this music is exactly. It arrived with us as a feeling, then a defiant chant, a repeating half hallucination set to building noise, an invocation of strong communal power and hope, through the confronting of the uncomfortable, and the taking of some personal responsibility for being part of that conversation… The sound of a dream, set to the dream of a sound.”

‘Beyond Hidden Words’ arrived as an experiment, as much Moderate Rebels material has, from posed questions: “Can 3 chords and ‘the truth’ still work in 2018?... At what point does repetition become psychedelic?... Once you lose track of structure and time in music, do you get any sense of the infinite?”

“We know ‘Beyond Hidden Words’ has become important to us, and we find it emotionally stirring, more so as we listen to it, and we do believe these to be the correct words for us to sing, to our bones, and perhaps that’s enough for now”.

“Some London gigs and a UK tour in November are being planned. We may play ‘Beyond Hidden Words’ and some other new songs for the whole 45 minutes at some. We’ve done it before with [MR’s first single] ‘God Sent Us’ and enjoyed it very much… None of us knew what was going on or what would happen. Once you get a taste for that kind of chaotic night… It’s addictive.”

Moderate Rebels follow their debut album ‘The Sound Of Security’ and ‘Proxy’ EP, both released in 2017. The collective’s previously stated approach to their songwriting is “to use as few words and chords as possible”. TWITTER.

We featured Moderate Rebels a couple of times last year including their debut album, and I think it fair to say they were one of my favourites bands of 2017. Returning with 'Beyond Hidden Words' the first taste of their second album due in November, and the bands ethos of using just a few chords and words remains intact, as does their ability to do so with imagination and fascination. The bonus personally is that I can remember all the lyrics, as I sing along (privately that is, you wouldn't want to hear me sing). 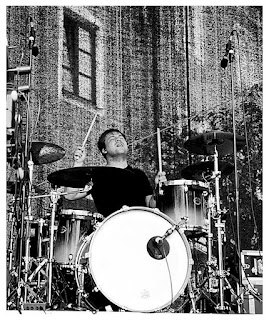 Background - “On 17th May, we had to say goodbye to our dear son, brother, uncle, friend and drummer Björn Mertz. He was a fighter and an optimist, always determined to support his beloved ones instead of burdening them with his own stroke of fate. After months of battling cancer, it seemed like a miracle when he left the hospital cancer-free at the beginning of this year – still full of enthusiasm and joy of living. He enjoyed the time with friends and family and poured all his energy into his music, his one true passion. So, after our former band The Satellite Year split up, we composed an album that was supposed to be our next project.

Björn was about to go to a health resort, so we wanted to record the songs afterwards – but as if he had had a vision, he insisted on finishing the recording of the drums before his leave. And so he did: 9 songs in only 8 hours! At this time there was no way that anybody could have known that he was already developing a number of new tumours. While his friends believed that Björn was at the health resort as planned, really he was staying at the Uniklinik Homburg, a hospital, again fighting a battle against cancer with only his family by his side – and he did fight to the last. There is no rational explanation for what had happened during the last few weeks of his life or why this even had to happen. Similarly, there are no words for the pain and grief we feel. But should pain, emptiness and misery be the only things left? He himself would not have wanted this.

Therefore, it’s the deepest wish of his family and friends that Björn’s music and with it his unique spirit live on. We finished Björn’s favourite song of the album as well as a music video and kindly ask you to donate whatever you want and can afford to give, in order to support the German Cancer Foundation”. FACEBOOK, BANDCAMP.

A sad background with plenty of reasons to feature this music video regardless of the quality. However 'Colliding Stars' is a fine song that deserves to be shared on it's own merit. Only featuring music we like, enables Beehive Candy to be positive about all we share, and in it's own minor way hopefully that understanding provides a small tribute, to a drummer we never personally knew and clearly, a naturally talented musician. 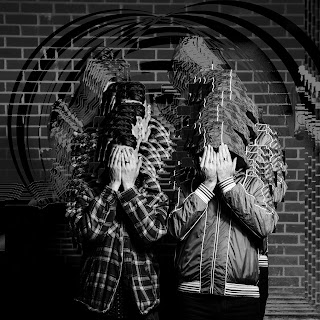 Background - Hymns of heartbreak and poetic reflections on grief and loss all dressed in music, steeped in the infectious energy and experimentation of 70s West Germany (Neu! Can, Faust). ilu also possesses a modernist European perspective that at first seemed at odds with their organic song-craft, yet it all coalesces into one coherent moving sound.

Krautrock, motoric grooves propel their songs, songs that are also informed by a love for spiky post-punk and its melancholic longing, evident in ilu's rain soaked chords that sit comfortably on these city rhythms. Splitting their time recording between Tallinn, Estonia and rural Wales, ilu will be releasing their debut single 'Graffiti Hen Ewrop' on August 3rd. This singular reclusive band are well worth the wait.

'Graffiti Hen Ewrop' - The lyrics came in one go, driving around a snowy Tallinn on Christmas day, throwing grief and sadness into the night that is falling around the city. "I had just lost my father a few months before moving to Tallinn and I was dealing with my grief and my own confusion that was crippling at the time. The album was written and recorded there in a small flat in Merivälja looking across the harbour over at the old medieval town, it is very much a journey back into the light”.

The rest of the recording and mixing were done under the guidance of Producer Tim Lewis (Coil, Julian Cope, Spiritualized) from his studio in rural Carmarthenshire, Wales. Mastering is by Iwan Morgan (Euros Childs, Gruff Rhys, Cate Le Bon, Sweet Baboo). TWITTER.

If you have been here often enough you may well have noted we have a thing about Krautrock. It's a very positive thing at that, and 'Graffiti Hen Ewrop' is one of those tracks that satisfies, as it also promises more! ilu have nailed it with this song.