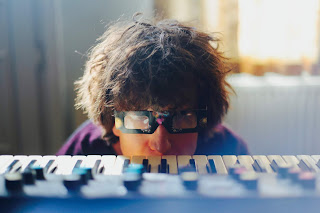 Background - When your songwriting theme is love it can often feel like a road too well travelled. From the rose-tinted idealisation of new love, to the emotional tempest of love lost, we’ve heard the story retold in countless variations; we get the picture. Enter Tiny Eyes with his latest song ‘Just Saying’, the first single to be taken from his forthcoming debut album, released next year. ‘Just Saying’ is about the less documented side of our strongest emotion.

It’s about the banal and the familiar, the quotidian journeys we go through with our lovers from sunrise to sunset, through mild annoyance to peaceable reconciliation, and then into bed again to repeat tomorrow. Featuring his partner Martha Bean on backing vocals, and made entirely at home on his trademark old 20’s piano with percussion patched together on a laptop, it’s a sonically adventurous ode to reality that endears itself to the listener through Tiny Eyes’ unique observational storytelling.

After cutting his teeth as the frontman of an angst-rock band for a few years, Tiny Eyes auteur Joel Evans met his partner (singer/songwriter Martha Bean) and found himself mellowing out. Feeling disconnected from the angst-ridden world of thrashing guitars his band drifted apart. It was around that time that he’d acquired an upright piano from the 1920’s. Taking to the instrument like a bird to flight, he quickly found a new musical voice and tonality that harmonised with his maturing tastes.

Tiny Eyes is a one-man band from Leicester, a singer and producer who’s reared himself on the understated elegance of lovelorn balladeers from the twentieth and twenty-first centuries. By turns evoking Lennon, Tom Waits, Elliot Smith, Flaming Lips and Andy Schauf, Tiny Eyes is a brilliant and unique new sound. Last year, the release of his brilliant and original self-titled debut EP set out his MO clearly: he is a narrative songwriter in the classic sense, employing clever turns of phrase and vivid imagery to weave imaginatively fertile and provocative yarns into his music. TWITTER.

'Just Saying' is one of those songs that establishes itself in the opening seconds, with a simple melody, desirable musical backdrop and vocals that are just so enticing and likable. It reminds me in part of Mercury Rev, but hey, any comparison to said band should be seen as a very positive complement. 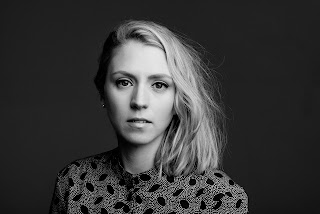 Hannah Scott - Pieces Of The Night.

Background - Originally from Ipswich and the daughter of an artist, Hannah Scott draws much of the inspiration for her music from her affinity with Italy. A year living and working on an olive press in rural Tuscany, provided the backdrop to her early work and she has found her musical home with creative partner Stefano Della Casa who she met in London but may well have met years earlier when regularly passing through the train station Stefano was working in!

When Hannah and Stefano began making music together, they realised that they had an incredible connection, despite coming from very different backgrounds. Stefano had a difficult upbringing and a troubled early adult life, while Hannah was lucky to have a supportive, happy childhood. Hannah has had her own difficulties following the recent diagnosis of a form of arthritis which causes severe joint pain and fatigue. Both artists, firmly believe that their musical collaboration has provided an outlet to support each other through difficult times.

“Around the time of my diagnosis we had quite a lot of shows and Stefano literally had to help me on and off the stage! He still insists on carrying all our equipment when we’re on the road which makes us laugh because he ends up looking like a porter and people must think I’m some kind of superstar refusing to pull my weight!” -  Hannah Scott

Stefano adds, “I was going through a pretty low patch while we were writing this record with no job and very little money and I’ll alwaChys remember Hannah turning up on my doorstep bringing groceries, even though she could hardly walk.” - Stefano

Their musical journey has also proved fruitful. Previous releases were supported by Bob Harris and Dermot O’Leary on BBC Radio 2. They’ve also been featured by MOJO, Songwriting Magazine and as ‘New Band of The Day’ in The Guardian. Hannah has opened for artists including Seth Lakeman and 10cc.

Stefano has recently signed to Ultra Music Publishing and the pair are now working between London and Italy. The result of their work is a new album, “Pieces Of The Night”, a collection of songs that expertly combines organic, live elements, with classy electronica and stunning production. Lyrically, they’re honest songs about the human condition and human connection in an increasingly hectic world. The album ranges from stunning instrumental performances such as ‘Boy In The Frame’, to crystalline electronica soundscapes in ‘Pieces of The Night’. The two artists have struck a perfect balance between Hannah’s traditional songwriting craft and Stefano’s exquisite synth-rich production style. TWITTER.

The melodic and distinct vocals of Hannah Scott are the focal point of 'Pieces Of The Night' the title track from the new album. The musical arrangement is carefully crafted, adding more depth and energy without distraction. It's also loaded with hooks, and typifies the quality and creativity the album is crammed full of. 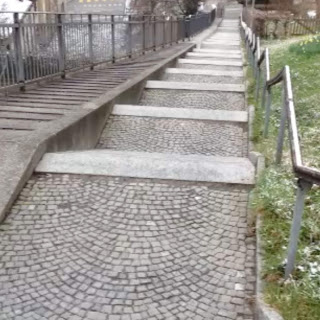 ElectroBluesSociety feat Jan Hidding - All The Way Down.

Background - In December 2017 Cuban Heels singer Jan Hidding did a recording session with ElectroBluesSociety and here is the third track from that session. This time another original and new song. This new single will be released digital only and will be available on all major download and streaming platforms.

ElectroBluesSociety is a new duo mixing electronics with raw vintage live sounds. Both of the musicians have been active in the European blues/roots scene for more then 30 years and in this new project they like to mix that experience with current technologies and other musical styles. The musical input from this new duo ranges from Alan Lomax to Roxy Music and from Charlie Parker to Led Zeppelin. On stage you will find computers, a double bass, foot pedals, vintage amps, guitars, midi controllers, an old drumkit and lots of cables. All of this handled by the two band members.

We have featured ElectroBluesSociety just once before back in December 2016. I think it fair to say that the second feature has been worth the wait. 'All The Way Down' has the deep rich vocals of Jan Hidding where his natural blues singing is fabulous, the backing music is stripped back with a potent blues guitar and drums and just a small glimpse of electro sounds.