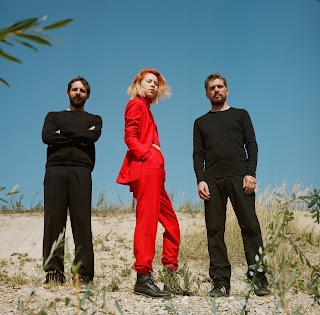 Background - Schmieds Puls have released new single ‘Don’t Love Me Like That’ taken from upcoming album Manic Acid Love. Fronted by Mira Lu Kovacs, Christian Grobauer (drums) and Walter Singer (bass) – Schmieds Puls are an Austrian outfit who have been making waves in their home territory for some time. Spanning genres, refusing to be pigeonholed and being politically outspoken, particularly regarding Mira’s feminism has cemented them as one of the countries most interesting outputs, earning them prestigious accolades such as the Amadeus Austrian Music Award.

New album Manic Acid Love is a triptych leading us through the spectrum of human emotion, the eleven tracks taking us through unconditional devotion (Manic), the deep vulnerability and pain this dedication precipitates (Acid) and the human power to overcome these hurdles and find peace (Love).

Delicate guitars are paired with staccato vocals that cut right through to the listener, giving you no choice but to stop what you’re doing and take note. Jazz knowledge and influences run through the veins of Schmieds Puls, while the tracks remain instantly catchy and full of pop sensibilities.

Along with anger, subtler emotions are articulated, such as on ‘Don’t Love Me Like That’. Mira explains “with "Don't Love Me Like That", I wanted to try to explain the complexity with that I experience love and relationships. For me nothing; no feeling, no situation, no connection between me and any other person is linear. It is always at least two things. It gets especially difficult when these things are the exact opposite of each other. I can feel drawn to a person as much as I need to be away from them. That can be confusing and exhausting, but that's how I experience it. Oftentimes it enriches my world. Nevertheless it is a love song, a brutally honest and therefore kind one, I want to say.” WEBSITE.

Taken from the forthcoming 'Manic Acid Love' we have the new single 'Don't Love Me Like That'. The band have an intrinsic overall sound that anchors their music, however they do creatively explore differing musical directions and emotions, sometimes subtly, other times with great clarity, and always with beautifully crafted pop sensibilities. 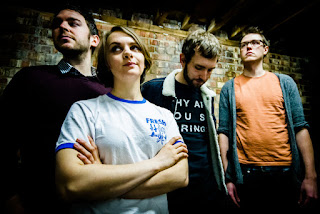 Background - Harnessing a great catchphrase in to an excellent album title, London four-piece Fightmilk are due to release their debut album Not With That Attitude on 2 November 2018 via Reckless Yes.  Fightmilk are Lily, Alex, Adam, and Nick – a four-piece from London who formed in the wake of broken relationships and an uncomfortable year spent living at home at the age of 25. They create sweaty, loud, shouty pop songs about crushing hard, acting out, and running away to solve crimes in Sweden. Blending acerbic lyrics with riffs galore and the urge to dance when you least expect it, Fightmilk revel in a certain inexplicable 90s nostalgia.

With “Four Star Hotel” Lily and Alex explore the ending of the relationships with their respective long-term partners (which was the catalyst to forming the band). Coincidentally both couples had booked vacations in Amsterdam towards the end and each realised that a holiday will never save a relationship. As Alex explains; “almost every line is based on one of our two true stories, from the shit-eating grins in the holiday photographs to having to push two twin beds together in a hotel room.”

Fightmilk formed in 2015 when lifelong friends Lily Rae and Alex Wisgard were both made romantically redundant at the same time. They realised there was too much angst, too much Kirsty MacColl, and too many drunk nights of making up fake band names for them not to be in a band together. They began writing songs, partly as a way to work out some of their issues and partly so that they could reference It’s Always Sunny In Philadelphia. Moving on from just the two of them and a drum machine called Elton that they couldn’t figure out how to operate, they were joined by Nick Kiddle on drums and Adam Wainwright on bass (who was also handy at piano, cooking dinner and making electronic music in his bedroom under the name of Future Wife).

They released two EPs, the self-releasedThe Curse Of Fightmilk in 2016 and Pity Party via Fierce Panda. As both EPs sold out, they released a compilation of the two, plus two bonus tracks, called Both Types of Hayfever in early 2018. They have shared the stage with Desperate Journalist, Worriers, Dream Nails, Spearmint and Skinny Girl Diet (amongst many others) and toured Germany. Securing radio support from Steve Lamacq on BBC 6Music and John Kennedy on Radio X they also received enthusiastic Twitter reactions from Helen Love and Eddie Argos. In a more unusual booking, they were recently the live support act for a screening of the film 10 Things I Hate About You. BANDCAMP.

'Four Star Hotel' is a dazzling indie pop/rock song that bursts into life firing musical hooks in all directions. Exciting and passionate if this is 90's nostalgia, then I'm ready for a bus load more of it! 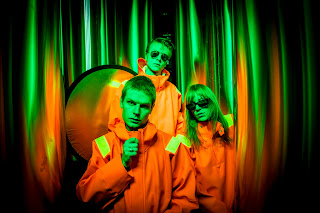 Background - After the release of their celebrated sophomore LP Sports last year, enigmatic trio Fufanu have dropped the second instalment in The Dialogue Series – Dialogue ii. The band have been releasing a series of EPs throughout the year – each one an exercise in exploring their multiple sonic personalities, from motorik and post-punk to alt-techno, to woozy avant-garde electronica. A full album comes at the end of it - The Dialogue Series is out 19th October on One Little Indian Records.

Lead single taken from the Dialogue ii, Typical Critical, explores the concept of online love vs real life love. “How we not only want to be loved and adored, but we want to feel it as well” says lyricist Kaktus Einarsson. “You want something more than to see it only through social media likes and emoji’s that someone loves you – you want to actually feel it. Feel a more complex love from what the world feeds on. Handmade love vs. mass-produced love.”

Once the band returned to Iceland after a long stint touring, they had a bag of demoes written at different junctures on the road, purposefully created with no regard for a unified sound. They were eager to release the tracks into the world as and when they were written, looking to capture the sense of urgency with which the songs were formed. However, they asked MC, DJ and producer Alap Momin to listen to the demoes and before they knew it, he was on a flight from Harlem to Iceland to work with the band. The result of his input only served to highlight their desire for a distinctive exploration of genres between each record. Kaktus laughs: “Three Icelandic techno-rockers brought the Harlem club scene to their studio in Iceland – it was a life changing week.

“It is a dialogue between musicians with different backgrounds, different approaches and different live styles, but we all have the same excitement about going into a new field of sounds. For example, we did cosmiche / motorik but worked it like hip hop and did pop like it was techno and also the other way around. Musically, the outcome goes from being deep and drugged, to fast and harsh, with heartfelt ballads in the middle. WEBSITE.

With just three tracks 'Dialogue ii' seems to cover so much ground. Both the music and vocals experiment with ideas, no two pieces are the same, and with the imagination each one brings it's hard to even consider picking a favourite, but easy to love each song.