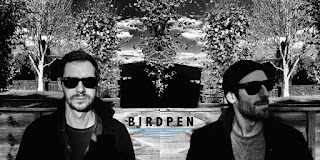 BirdPen - Eyes In The Sky.

Background - BirdPen is an alternative rock/electronic/prog act formed by Dave Pen (also the singer and guitarist in Archive) and Mike Bird. Their fifth studio album, ’There’s Something Wrong With Everything’, will be released in mid-October, immediately preceded by new single ‘Oh So Happy’.

Families sit huddled together in front of their flatscreen TV’s peeking through their hands to see the new world leader being sworn in by a fading shadow of hope while criminals applaud. The world is crying and The End Is On TV. Outside, lost souls wander in a daze fixed on prescription drugs with Eyes In The Sky. This Is Your Life trying to escape advertising and takeaway menus and spending what you don’t have and looking perfect and trying to fit in and everyone and everything always being Oh So Happy.

Escape when and how you can, get off your knees and face the sun, find your groove and create an Easy Life for yourself as the screens keep the mind bombarded with grim tales, fear and sadness. Why can’t they bring us some Good News? Don’t let the Natural Rewardswe seek be diluted, fight the lies however you can because we realise and accept that there will always be Something Wrong With Everything. Never give up as you have everything to win the race, it’s beautiful with love and grace, keep moving on. WEBSITE.

Welcome to ‘There’s Something Wrong With Everything’. Welcome to the world of BirdPen. BirdPen will play an extensive European tour to promote the album, starting with two UK shows :
17.10.18  London The Islington
18.10.18  Southampton Joiners Arms

The third of ten tracks on the soon to be released 'There's Something Wrong With Everything' album is 'Eyes In The Sky'. It's a fine example of the quality and style of music BirdPen produce,as they explore a diverse range of genres with a well defined core sound. The influences are there, that's hard to avoid considering the sheer quality of those they are inspired by, that said though, they have carved out their own identity both in sound and with plenty of hooks that give each song that little extra. 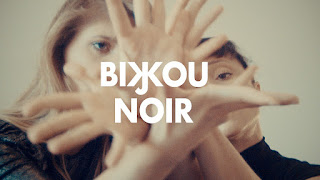 Bijou Noir - The Spine in Your Back.

Background - Bijou Noir Release "The Spine in Your Back" Music Video. We are pleased to present you with the latest visual from Bijou Noir's lauded debut We Are Alone Together.

The video was created with the critically acclaimed Croatian &M Dance Company, along with director Joseph Hyrkas.

Voyeuristically captured in gorgeous muted-tones using only natural light and minimal equipment, Director Joseph Hyrkas captures the raw emotion and the dancers' closeness with an air of sensitivity. WEBSITE.

The video that partners the song 'The Spine in Your Back' is an impressive and pretty intense piece. The song is hypnotic, equally dramatic and engaging. Put the two together and the result is quite compelling as music and dance collide and mesmerise, this is hard to ignore both visually and musically. 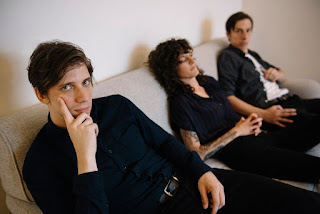 “Duplicate” is the record’s thesis. It informed many of the other songs’ thematic content, as well as Ana Becker’s album art (reflection, duality.) The song centers on conflicting and frustrated identities. It’s so easy to value yourself based on self identity, like social constructs and occupation, but that’s a slippery slope. That will inevitably lead to comparing yourself to your peers to measure self-worth, that can be a painful, distorted way of dealing with life. One will only see what they can’t control or don’t have, leaving little space for basic gratitude and contentment. - Tim Race, Big Bliss

At Middle Distance marks a new, unprecedented milestone for the band. Recorded and mixed at Tony Maimone’s (Pere Ubu) Studio G and Thump Recordings in Brooklyn, producer Jeff Berner (Psychic TV) evokes the tonal clarity and emotive noise that constitutes Big Bliss’s special brand of dark-tinged melodic euphoria. Songs successively ebb and flow in tempo and mania, alternating the spotlight on each player. Cory Race's fervent drumming is simultaneously unwavering and creative, as May’s fluid, leading bass lines offer clarity and resolve in every hook. Tim Race’s ethereal guitar shimmers like spurts of heat lightning during summer’s thick humidity, and the thundering rhythm section only compliments its brilliance. Their instruments alone are enough to fill any room, no matter the size. Tim's effectual and guttural vocals can either hover above the mix, or swoop through it, giving an actual tangibility to this “feelings” thing on which you can’t quite put your finger.

Lyrically, it is a challenge to Race’s notions of identity ("Duplicate"), a hidden history of addiction ("RTK"), and in the record’s opening salvo (“Constants”), the destruction left in the wake of a twenty-something person selfishly chasing “constant, eternal bliss,” and alienating the ones they love. He asks how we cope with events that shift our concepts of ourselves, like the death of an alcoholic uncle ("Richard Race"), or the end of a devoted companionship ("High Ideal"). He’s both looking inward and reaching out, hoping to find solid ground somewhere in between, a place from which he can be a better friend, a better lover, a place from where he can meet you.

At Middle Distance speaks in urgent tongues, desperate to convey unknowable longing, like every great post-punk artist who came before. Moments of joy, moments of unspeakable sadness, moments of rage, all rub shoulders through these songs, and by the record’s end, you’ve undoubtedly run the gauntlet. TWITTER.

The vocals are everything post punk needs as they convey passion, urgency and a sense of desperate concern. 'Duplicate' is a powerful rocker with plenty of subtle hooks to pull the listener in further, the clarity of each element is notable, the album is sounding promising on the strength of this song.