September 06, 2019
Locks return to Beehive Candy for a seventh time with their latest release 'In The City'. The bands creativity is notable in pretty much anything they record, this time they have shared a simmering alt folk song with bags of atmosphere and a very addictive vibe.

From The Cordial Sins we have their new single 'Cruel'. I was hoping to share the video for it, but it's still unlisted as I write, nonetheless this is a gorgeous and melodic alt pop song that is released today.

Ex Norwegian have shared 'Life' along with a video that brings out the psychedelic feel of this fabulous and somewhat sixties orientated rocker. The band may have been around for a while, but they are still putting out some really fine new songs.

Our second feature for The Be Positives this time we have 'She's The Girl' and boy does it contrast with the last song. This time the melodic vocals lead with a toned down rock backdrop, last time they were belting it out in full garage rock mode, either way they are good.

Just four weeks after sharing the video for 'Hear Me' Dominic Sen returns with 'What It Is'. Her vocals are distinct and melodic on this beautifully arranged and somewhat gentler piece, and the hooks slowly dig in deep. 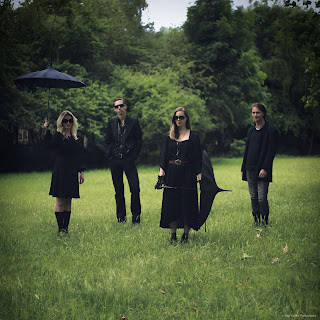 Locks - In The City.

In The City is the third track taken from the folk-noir quartettes debut album Skeletal Blues. It contains their signature traits which the band have honed over time, shuffle-esq tribal drums, rumbling bass lines, fiddle hooks throughout and story-telling fables.

“This song, simply put, is all about revenge. You’ll get what you deserve no matter what.” L. Geary-Griffin. “The fiddle part was made to sound like a siren echoing a warning ‘don’t come into the city tonight’” Marian McClenaghan.

The B-side to In The City is a remix of Teeth from their debut EP Rattle Them Bones! By Stos Goneos of Zambian swamp-blues brother duo Bite The Buffalo In The City & Teeth remix available as digital download September 6th 2019. 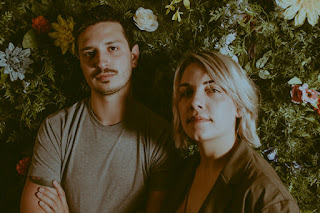 The Cordial Sins' new single is entitiled "Cruel". A personal reflection and a journey toward the resolve of inner conflict, "Cruel" is a rollercoaster representing how isolation manifests when one dwells on unresolved grief and the emotional labor of the past.

However, this isolation acts as a catalyst for personal growth, change, and eventual peace. Musically the track features the band in their finest pop form with Liz Fisher's beautifully rising and arresting vocals alongside Corey Dickerson's lush guitar textures.

Drawing fervent attention for their delectable meld of alternative, pop and shoegaze, The Cordial Sins have recently completed their first U.S. tour in support of Elvis Depressedly. The group’s electrifying performance has also been showcased on stages shared with the likes of The Breeders, Foals, The Flaming Lips, Twin Peaks, Wolf Alice and more. 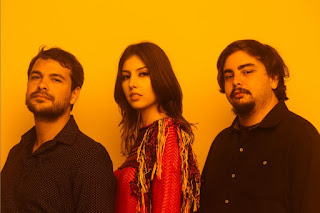 Somehow, through cosmic forces and mystical hiccups, it’s entirely possible you’ve been missing out on one of music’s great treasures. Following a musical lineage of power pop greats from the 60’s and 70’s, as well as the unhinged genius of the likes of They Might Be Giants and Squeeze, they have spent the last ten years cultivating a rabid fanbase and critical acclaim from publications worldwide. Over 25 tracks (15 on the vinyl edition), Something Unreal is a monolithic slab of glorious hooks and Michelle Grand’s Debbie Harry-esque vocals trading blows with Roger Houdaille’s rabble-rousing tones - if this is the first time you’ve encountered them, a technicolour world awaits you.

Based in Miami Beach, Florida, Ex Norwegian (named, obviously, after the Monty Python sketch), Ex Norwegian have had an evolving cast of band members, with the odd exploding drummer and bassists lost at sea but throughout it all, prolific songwriter, Roger Houdaille has remained. Something Unreal features fan favourites, Life and Making Deals, by turns swirling psych tempests and grandiose anthemic glam hurricanes.

The band’s output of chiming, melodic pop and rock gems began in 2008 with their album, Standby, at the CMJ Festival in New York, immediately causing a stir and understandably having countless genres thrown at them in the hope that one would stick.

Released in late 2016, Glazer/Hazerr is described as a “love letter to classic rock ‘n’ roll based pop” by UK’s Shindig Magazine. A low-key release, Tekstet (Subtitled) along with a 40-track covers album, Original Copies, quickly followed in 2017 leading up to 2018’s No Sleep. The ninth album, No Sleep, arguably took the band back to the beginning, crafting straightforward pop/rock songs with effective arrangements and quirky lyrics with strong melodies, with the main trio of Roger, Michelle and Giuseppe working collectively on it. 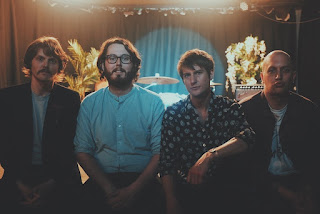 The Be Positives - She's The Girl.

THE BE POSITIVES is a northern conundrum. Consisting of Mike Seal (Guitar, Piano & Vocals), Rob Hatton (Bass & Vocals), Simon Mayne (Lead Guitar & Vocals) and Callum Darley (Drums & Vocals), they were splayed across Merseyside to Sheffield, all sharing an affinity for McCartney, Dylan, Kinks and Nick Lowe, and later, converging on Manchester, they hankered for gigging at grotty pubs across the city. Now united, the four-piece invoke mad-pop affirmation through berserk instrumentation laced with smart lyricism.

Of the same vein as Cut Worms, filled with Lemon Twigs-esque zest, second slice ‘Like Everyone’ flaps about with math-rock melodies and striking signatures – you never know quite where you stand – aligning it both musically and conceptually, feeding into Mike’s howls of “we’re like everyone…”

The band elaborates; “Like Everyone was originally intended for Proto Idiot but the weird timing of it threw us and it got shelved. I'm glad we revived it for The Be Positives as it’s understated and simple, yet the concept behind it is far from…. It was also one of those rare occasions where a song falls out of the guitar fully-formed, which doesn't happen often. We’re like everyone…”

Director Callum Scott-Dustin, who also created the visual for the band’s debut single, says; "For the 'Like Everyone' video we wanted to try and do something a little vintage and tongue in cheek, in the style of some Paul McCartney and Harry Nilsson videos we like. We played around with split screen, costume changes, some green screen and the idea of a fake concert within the video. We shot it all in a day at a Manchester venue then I had loads of fun throwing all the elements together in post, going for something playful that matched the energy and colour of the track."

The quartet’s self-titled album encapsulates their varied musical influences, from their garage fueled opening track ‘Like Everyone’ to the Nilsson tinged mad-pop of new single ‘Monkey. The Be Positives certainly don’t attach themselves to one genre. Expanding on ‘Like Everyone’, the band said “The song was written very quickly on acoustic guitar in Mike and Callum's kitchen. It was originally intended for Proto Idiot. You could sum the theme of the song up by simply saying, we all make mistakes; we're all the same.” 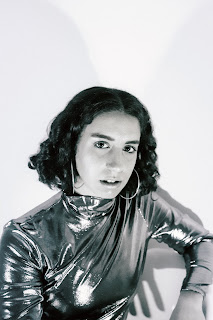 Dominic Sen - What It Is.

'What It Is' is Dominic Sen's second single from their terrestrial debut 'Visitor' out on October 18 on Roll Call Records. It follows previous single 'Hear Me', acting as yet another vignette from the love story, space opera, and thought experiment that is 'Visitor'. The album tells the tale of Tal Naata, a biologically human female coming from a distant and socially progressive civilisation to study Earth. Taking Tal Naata’s story as their prism, Sen casts our own primitive ideas of gender, duality and social cohesion back at us through shimmering, crystalline pop that pays homage to our recent past.

‘What It Is’ develops Tal Naata’s longing for connection on Earth. After spending her first months here struggling to adapt socially, she finds her interest piqued by a regular patron of the academic library in which she works. “I notice the books that you’re reading / you come ‘round the same time each day”. Tal Naata gives herself over to an insatiable curiosity to know more about this human that she feels inexplicably drawn to as her feelings morph into attraction. ‘What It Is’ is Sen’s own take on the female gaze in the throes of budding desire. Documenting one of the mainstays of the human experience, it is most simplistically a song about having a crush from afar and the follies and fluttering excitement that ensue.

Like Tal Naata, the album's creator Dominic Sen is themselves a visitor to Earth. The seventh and only surviving child of the supermassive black hole at the centre of “The Evil Eye Galaxy,” Sen drifted around space in limbo until intercepting the radio waves from Earth’s broadcasts during 1980’s and 1990’s. Our colourful pop culture precipitated Sen’s fixation on the meretricious myth of Earthbound stardom and eventually led them to create 'Visitor'.

‘Visitor’ will be released on Roll Call Records on October 18. It will be immediately available for pre-order, including as a limited edition LP in “Interstellar White” vinyl. 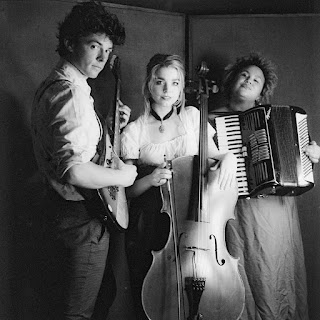 Bandits On The Run - The Ballad of Bonnie Jean (Live at the Safehouse).

Bandits on the Run have joined forces with The Power Station at BerkleeNYC to create “The Ballad of Bonnie Jean,” an immersive 360 experience where the audience finds themselves at the center of all elements, being surrounded by the music featuring spatial, ambisonic audio. When a viewer rotates the video by moving a mobile device, dragging the picture on a computer, or moving their head while wearing VR goggles, the sound field also rotates.

Stephen Webber, the Executive Director of BerkleeNYC, explains, "Power Station at BerkleeNYC is committed to pushing forward new modes of artistic technology and is becoming a leader in the development of 360 Cinematic VR music video content, featuring spatial audio. When it came time to present an educational session on ambisonic audio, I wanted to find a compelling acoustic group who knew how to engage an audience and was flexible enough to choreograph a performance to a 360 camera in the middle of the action. Bandits on the Run was the perfect choice! Their choreography blew away expectations, and the uber-talented trio provided a chilling, immersive performance that must be experienced to be believed. I truly believe the Bandits' 360 version of 'The Ballad of Bonnie Jean' is a pivotal moment in the development of 360 Cinematic music video!"

Comprised of cellist/badass Sydney Shepherd (who goes by the moniker “Bonanza Jellyfish,”) guitarist/fool Adrian Blake Enscoe (“Roy Dodger,”) and player-of-toys/clairvoyant Regina Strayhorn (“Clarissa,”), who are all actors in addition to troubadours, Bandits on the Run’s signature three-part harmonic voice stands at the center of their musical equation. Throw in some serious cello action, hooks played on various and sundry toy instruments, and a steely spine of rhythm guitar all accompanied by a suitcase drum packing a powerful punch and bang: you’ve got the basic magic of banditry, with a sound forged while busking in the acoustics of NYC subway stations.