The Rightly So - Tuvaband - Ora The Molecule - Marinho

September 08, 2019
The Rightly So have just released 'Vandura' an album comprising of eleven songs where the duo explore a variety of folk and Americana styles. It's a refreshing collection of material, your never quite sure where the next track will take you, be assured this really is a refined and captivating collection of songs, a must for modern folk and all things Americana fans.

From Tuvaband we have a new music video for 'I Entered The Void'. The song is highly creative and I would suggest quite mesmerising. The cinematic video complements the piece and Tuva Hellum Marschhäuseris is most definitely on our one to watch out for radar.

Ora The Molecule have shared 'When Earth Took A Breath' accompanied by a fascinating video that works so well with this majestic alt pop song. 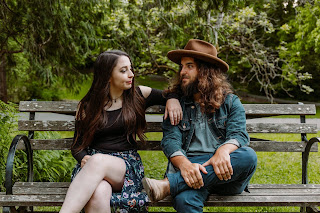 The Rightly So - Vandura (album).

Buffalo NY-based Americana/Folk duo The Rightly So have just released their brand new album "Vandura". Not a pair to stay on the couch, The Rightly So have been touring relentlessly, living on the road, and in fact, that lifestyle and new perspective has become inspiration for this new release.

"We've spent the last year and a half living out of our homemade RV built inside an old Verizon work truck, traveling over 40,000 miles and playing shows in over 20 states. "Vandura" is the culmination of 18 months of adventures, a collection of stories we've watched unfold and all of the places we've been. Living on the road has given us an entirely new perspective that has permeated this album to its core. It's a layered look into the many facets of what it's like to travel the back roads of America in an old van for a living, and our love for this new lifestyle that we've embraced is a constant theme."

Born in the heart of the Buffalo rust belt, The Rightly So brings a vibrant energy to Americana music. The young acoustic duo is comprised of esteemed guitarist and performer Gregory Zeis, and award-winning singer/songwriter Jess Chizuk. Likened to The Milk Carton Kids and The Secret Sisters, The Rightly So has developed a unique style of captivating acoustic music carried by perfectly blended harmonies by voices that have been described as “electric and deeply in tune.”

Combined, Jess and Greg have nearly 20 years of performing experience while still in their early 20's themselves. The duo has played 100+ shows each year for the last 4 years and orchestrated three nationwide tours. They have performed with Howie Day, Phoebe Hunt & The Gatherers, Sean Patrick McGraw, Dylan Jakobsen, and Davina and the Vagabonds, and have been featured in The Huffington Post, No Depression Magazine, and NPR affiliates in Amarillo (TX) and Grand Junction (CO). The Rightly So’s music combines the nostalgia of classic, down-home Americana with the sounds of contemporary folk. Their self-titled album provides an honest look into what a live performance from this duo is like; two guitars, two voices and a batch of well-crafted songs, full of vibrant energy and chemistry without losing any musical integrity. Their tasteful guitar riffs, singable melodies and storytelling lyrics have won them a number of accolades and awards alike. 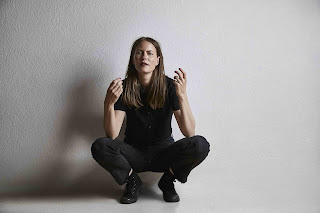 Tuvaband - I Entered The Void.

Tuvaband is the work of Norwegian artist Tuva Hellum Marschhäuser. Tuva has a rare knack for capturing a strange magic in her songs, delicate compositions that range from delicate, piano-led folk to softly-soaring, post-rock that wraps the listener up in its own special atmosphere, held spellbound by the sounds swirling around her captivating, feather-light vocal.

‘I Entered The Void’ is a perfect introduction to both Tuvaband’s strange blend of magic, but also to the themes and tones found specifically within the forthcoming album of the same name. The single is gorgeously decorated with its instruments, its synth-line descending like rainfall and paired with choppy guitar waves, that musical beauty builds a world for Tuva’s vocal character to inhabit. In the verses, she’s a little restrained, singing under the weight of the feelings she’s carrying, rolling from barbed lyrics “her guts leaked, I was the retainer”, to aggressive then to wounded, before the chorus soars up through the song, and provides the release, the escape of falling into the Void. As Tuva expands:

“‘I Entered The Void’ is about realizing that you feel like an overflowing container of the emotions of others. And then what it feels like when the container suddenly becomes empty. It’s a song about getting lost in a void. This song was the first song I wrote for this album.” Tuvaband’s forthcoming long-player I Entered The Void follows their critically acclaimed debut album Soft Drop (2018, Brilliance Records) which garnered acclaim both in Tuva’s homeland of Norway and internationally, with Tuvaband being named ‘Ones to Watch’ twice by The Guardian, and the band’s SXSW Austin showcase of the same year garnering a flurry of attention from the likes of Brooklyn Vegan and IMPOSE.

I Entered The Void is a slight departure from Tuvaband’s previous style, inspired in part by Tuva’s personal life after a relocation to Berlin. Sonically the new record moves away from the deliberate minimalism of its predecessor Soft Drop with I Entered The Void offering a weightier and fuller sound. It was recorded with Tuvaband’s current live band to add more muscle, and it was a change in Tuvaband’s live sound that inspired the shift of style in the recorded work, as Tuva explains:

“I wanted a more distorted sound, and live, my band and I really tried to push the boundaries from my released music by moving from stripped down and vulnerable, to trying to sound like a punk/rock band. I felt like we were able to sound really rough and tough in parts of our sets. I really wanted people to hear this new side of the project, so there was no doubt I wanted this live version to be on my new album”. Elsewhere on the album, in its title and much of its lyrical themes, there is a much more introspective influence, with the record inspired by Tuva’s experience of newly moving to Berlin, as she expands:

“After a few months in Berlin, I was in this space I called ‘The Void’, a place between old and new. Like a waiting room. The album is about the reflections, thoughts and feelings that can appear in an empty space - a void - a break - with a distance from my earlier life, relations and society.” 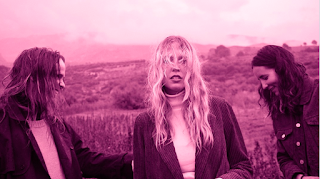 Ora The Molecule - When Earth Took A Breath.

‘When Earth Took A Breath (Are You There?)’ is the mesmerising alt-pop cut from Ora the Molecule, following global dance anthem ‘Salé’. Mixed by Erin Tonkon (David Bowie, PIXX) and underlined by bubbling synthesizers, ‘When Earth Took A Breath’ builds to a moving crescendo of guitar and crashing drums, somewhere between Cocteau Twins and Beach House.

Written as a stream of consciousness, the track is rooted in vocalist Nora’s recurring childhood dream of a ghost chasing her: “One night I realised that it was a dream, so I turned around and spoke to the ghost. He then disappeared, I woke up and I never had the dream again, as if confronting him broke the illusion, and that he could only exist as long as I feared him.”

Ora the Molecule translated this dream into civilisation’s relationship with nature. When misunderstood, it’s seen as fearfully omnipresent and powerful, disturbing our “need to learn to live in harmony with it.” The video parallels the sonic vastness of the track. Directed by Lambert Grand it’s a cinematic film following the journey of twins escaping imprisonment from something unknown, drenched with lush visuals.

Grand describes the methods that create this vibrancy: "I shot this video using what’s called a Full Spectrum Camera, and I used a specific filter that is able to see a certain type of infrared. The result is what you saw: everything that highly reflects infrared like plants appear red. What makes this project great is that so far no film or music video have been done using this technology and filter.”

Ora the Molecule are united by a mutual love of dance music, all three of them DJing italo, electronica and techno. These electronic sounds are blended with the 80s influences of Kraftwerk and Suzanne Vega, the result is their own unique strain of alt-pop.

With roots in Norway, Germany and Slovakia, they formed by chance in LA, consisting of vocalist Nora (who was searching for her estranged father at the time), drummer Sju and synth player Jan. They now record their distinctive dance-pop between the English countryside and the Andalusian mountains. 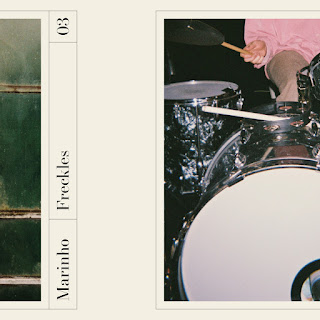 Portuguese alternative folk-rock artist, Marinho, has released her latest single, “Freckles,” in anticipation of her debut LP, ~ (read tilde), to be released October 18th on Street Mission Records. “‘Freckles’ was the most difficult track [on the album] to put together in the studio and it was also the most rewarding one to record,” Marinho says. “It was born out of the bass riff that had been stuck in my head for years. It’s also a very personal song about growing up at the hands of people not mature enough to raise kids, working out childhood traumas and lack of acceptance, feeling emotionally faulted or bankrupt. I'm particularly vulnerable and exposed at the end of the song when I say, ‘Dad pushes everyone away, Mom pulled away from everyone, And life is like a tilde sign with ups and downs, not a straight line.’”

Born in Lisbon and raised in front of the TV, Filipa Marinho had plenty of early exposure to American cartoons and mid-90's movies, as well as a growing intimacy with Hollywood’s views on love, relationships, and overall human nature. Now, as a young adult using her last name as her moniker, she tries to come to terms with what lies between overly romanticized expectations and real non-sitcom life. Resolutions come in the form of the songs which she has written and assembled over the years which make up ~.

Recorded at Black Sheep Studios and mastered by Philip Shaw Bova (Father John Misty, Marlon Williams, Feist, Andy Shauf), ~ is constructed from the simplicity of the roots of American folk music, with lush, cinematic tinges. The first single, “Ghost Notes,” made a splash on major Portuguese radio stations as well as Spotify and Apple Music playlists such as “Fresh Finds: Six Strings” and “New Music Friday,” and “Breaking Alternative,” respectively. The momentum continued to build with the release of “Window Pain,” which premiered on VICE Portugal, and Marinho spent the spring and summer touring in anticipation of the album.

Marinho will be dropping more singles and videos throughout the fall of 2019, surrounding the release of ~ on October 18th.