October 19, 2019
Marika Wittmar has just shared 'Underneath Your Hands'. The Swedish songwriter has surrounded herself with an impressive musical arrangement which contrast well with her distinct and powerful vocals.

Ttrruuces debut track in entitled 'Sad Girl'. Accompanied by an animated video, the song opens as a gently melodic piece. Gorgeously arranged with fabulous harmonies and rich textures of musical sound, it builds into something quite epic.

Malena Zavala latest release is 'En La Noche' a song that somehow manages to capture the vibrancy of Latin American music and mix it with psych pop/rock! This is something rather special. 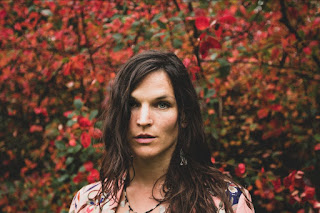 Marika Wittmar - Underneath Your Hands.

Marika Wittmar is a Swedish songwriter and artist who mixes influences from blues, folk/world music, ballads and jazz with lyrics inspired by i.a. buddhistic meditation and female mythology.

Her band, constisting of both folk musicians and jazz musicians was formed at the Academy of Music and Drama in Gothenburg 2018. Hammond organ, drums, bouzouki, harmonies, bass and guitars make up the bands' instrumental foundation, together with Marikas powerful and characteristic lead vocals.

The debut-EP Underneath Your Hands was recorded in Svenska Grammofonstudion in Gothenburg in spring of 2019 and will be released later this year. 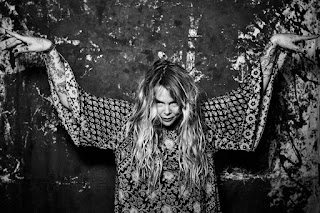 Swedish quartet True Moon offers an enchanting blend of dark wave, post-punk, and alternative that eclipses musical trends.  Formed by members of Grammy-nominated band Vånna Inget, Karolina Engdahl (vocals/bass) and Tommy Tift (guitar), they have created a charming darkness; together with Linus Segerstedt (guitar) and Fredrik Orevad (drums), they are a force to be reckoned with.

Engdahl and Tift began this project when they were inspired to create something that was more raw and visceral than the songs they were working on for Vånna. "It was like an urge and we just had to do this,” says Engdahl. The result was True Moon's 2016 self-titled debut, a brooding yet sensual work that garnered attention in the Scandinavian music community and beyond.  With influences including Joy Division, Siouxsie and the Banshees, Sisters of Mercy, The Mission, early Cure, Stevie Nicks, and Heart, they channeled a sound of bittersweet twilight.

True Moon expanded their audience with performances in Sweden, the UK, and the United States, playing with bands like Killing Joke, King Dude, MCC, Dead Soul, Nicole Saboune, and many more. Now poised for their next release, titled II, True Moon has nowhere to go but up. "We want to draw our own cult of believers together and create a little chaos of our own," Karolina says. "We want this record to be like an infectious poison."

Both II and True Moon were produced by Jari Haapalainen, who adds guitar to the recordings and also joins the band on stage occasionally. Lövely Records will release II in digital, CD, and vinyl formats on November 1st, 2019. 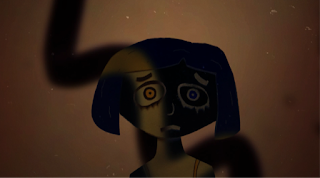 It’s notoriously hard to stand out in the congested world of new music, but that’s something that TTRRUUCES have achieved with their debut track ‘Sad Girl’. From their storytelling style to their unique sound through to their touching animated video, TTRRUUCES are doing something quite unlike anyone else around.

Their debut single ‘Sad Girl’ represents the first chapter of a grand narrative tale that will be told in full with TTRRUUCES’s debut album. The song introduces Sadie, the ‘Sad Girl’ of its title. She’s 17-years-old, depressed and different. As a musician who loves the icons of rock and roll history – Bowie, Queen, The Velvet Underground, Nirvana - Sadie feels out of place and out of time with her generation. She has few friends and has never had a boyfriend.

But little does she realise that she’s on the cusp of a much bigger adventure. As the song’s lyrics promise, “Have a little patience, you may find just what you’re looking for.”

The opening of ‘Sad Girl’ sounds like some long-lost masterpiece of late ‘60s psych folk that’s only just been rediscovered by a particularly committed crate-digger. Yet it constantly shifts into an individualistic amalgamation of other genres and sounds, taking in choral-style vocal harmonies, lush bursts of strings and a Zappa-esque guitar solo.

That spirit of adventure extends to the striking video. Callum Scott-Dyson mixes a range of animation techniques to bring the ‘Sad Girl’ to life, in the process dropping some subtle references to a variety of legendary artists. The visuals that bring TTRRUUCES’s fictional universe will evolve with future releases, with a live action cast and experimental film techniques bringing the rock opera and its protagonists to life.

Though based in London, TTRRUUCES relocated to the French seaside for a year to give themselves the freedom to fully immerse themselves in creating their debut album. They produced it themselves before calling on Alan Moulder (Arctic Monkeys, Smashing Pumpkins, Nine Inch Nails) for mixing duties. The song was mastered by France’s leading engineer Chab (Daft Punk, Christine & The Queens). 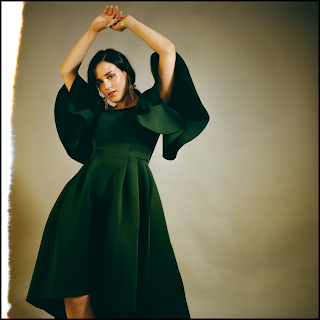 Heritage is a complex thing for the Argentina born and UK raised producer/multi-instrumentalist songwriter Malena Zavala. On her debut album Aliso, released last year, she offered an aesthetic which married the worldly rhythms and magical lyricism of her latino background with the vitality and production values of contemporary psych rock and dream pop. It was quickly lauded for its creative fearlessness and dulcet melodics. The Guardian praised it in their 4* review as did The Sunday Times, Stereogum, NPR, The Line of Best Fit and more.

Not one to rest on her laurels, Malena has been prolific since, playing festivals such as Green Man and touring with Men I Trust, Blanco White and Lord Huron and writing a trove of new material which she intends to release as her second album early next year. The first single from this new body of work, ‘En La Noche’ (translates as 'In The Night') combines traditional Latino Cumbia rhythms with lysergic guitars and a swirling ambient production style to create a beatific exploration of the role of dreams in creativity. “I started creating a fictional world where your dreams are just important as your reality" explains Malena.

"I had been reading Gabriel Garcia Márquez’s ‘100 Years Of Solitude’ so I was obsessed with magical realism at the time. In your dreams the whole world dances together. If you get complacent, magical forces pin you to the floor and you can spend the rest of your days there. It’s a metaphor for getting as much as you can out of life and not getting lazy.”

By pairing the music of her earliest memories with the music of her young adulthood, Malena challenges generic conventions while simultaneously crossing the borders of identity. ‘En La Noche’ invites the musical worlds of salsa, afro-funk, cumbia, guarani, and many more, to a moonlit dream party with the likes of Beach House, Tame Impala, Khruangbin and Connan Mockasin.

She hopes the rhythms in her music will bring people together: “Dancing is in the heart of Latin America and in my soul so I wanted to incorporate more of that in my music and live shows to get anyone moving. Even people who aren’t comfortable dancing. It takes all seriousness out of it”.

The dance theme continues with the vibrant new video for ‘En La Noche’ directed by George Moore. “I wanted to really capture the energising effect of the music, and reflect the song’s vibrancy in the visuals,” says Moore. “Out of that came the idea of starting with painterly staged poses, and building up to a dynamic and colourful dance sequence as the music fills the performers with life.

“The decision to shoot in a stunning Victorian theatre and use a lot of smooth motion helped lend a floaty, dream-like quality to the video, and Malena really knocked the choreography out of the park, with intuitive dance skills the rest of us can only dream of!” By synthesising the things she loves, Malena’s music expresses herself in its purest form. She is a vital new sound for our transnational times. 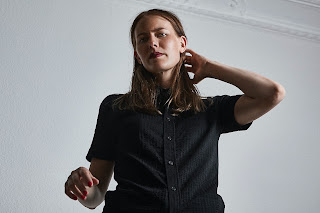 Tuvaband - He Said Me Too.

Last month Tuvaband (aka Norwegian artist Tuva Hellum Marschhäuser) announced the release of their second album I Entered The Void (27 November via Brilliance Records), and shared the album’s title track - an otherworldly, atmospheric slice of Brad Fiedel-esque cinematic synthwave. Now Tuvaband return with a second single ‘He Said Me Too’, a song equal to its predecessor in its ethereal beauty but with a duskier, heavier soul. ‘He Said Me Too’ is a song that binds itself around the listener, at once both alluring in its melancholy yet claustrophobic, giving the sense that the listener is drowning in the song’s spellbinding current.

‘He Said Me Too’ is a song about the complex process whereby the oppressed become the oppressor, and the mentality that being a victim creates an increasingly accepted cycle of revenge. Inspired by a series of documentaries and media coverage in Norway, of witch hunts and shifting power struggles, in ‘He Said Me Too’ Tuva reflects on ideas such as the cycle of war, as Tuva expands “after a war in a country where one group is oppressed, very often you see that group later go to war against the group that offended”. Its a song that explores without judgment a human trait Tuva finds “interesting, but also scary and sad”, one where values and principles are lost in a cycle of an eye for an eye.

The lyrical depth of thought displayed on ‘He Said Me Too’ is indicative of the I Entered The Void long-player as a whole. The album was written in what Tuva describes as “The Void”, newly relocated to Berlin, the artist found herself in a place between old and new, with most of the album being written
by Tuva alone in her home studio. This period of isolation has led to an album of deep musical undercurrents, and even deeper lyrical reflections.

Tuvaband has previously released one album, the critically acclaimed debut Soft Drop (2018, AntiFragile/Brilliance Records), which garnered acclaim both in Tuva’s homeland of Norway and internationally, with Tuvaband being named ‘Ones to Watch’ twice by The Guardian, and the band’s SXSW Austin showcase of the same year garnering a flurry of attention from tastemaker US media.

‘He Said Me Too’ is released as a digital single today with the album I Entered The Void following on 27 November, both on Brilliance Records. Tuvaband will perform in the UK in the new year: 5th February 2020: The Lexington, London.