October 18, 2019
Tayla Young has a new single 'With The Fire' which opens in a gentle, beautiful manner and then gradually builds in power without overdoing it and allowing her vocals to shine right through.

We have a fabulous song from Gran Noir entitled 'On And On'. The driving beat and melodic vocals are accompanied by a fresh new video, this is just so catchy.

Damone share the single 'Moon and Stars' which is a bright and smooth alt pop / rock piece with melodic vocals and harmonies.

Rue Snider has been featured on Beehive Candy a few times and the new video and song 'Chelsea' sees his music take on a more fuzzy rock feel, with a dramatic vibe.

From Plaza we have their new song 'See'. The pace is slow, the music and harmonies conjure an atmospheric feel, and the distinct lead vocals really do add character.

Desert Sparrow share a story line video for 'Karma', the song itself is a mixture of indie folk and sixties pop sensibilities, it's very catchy to. 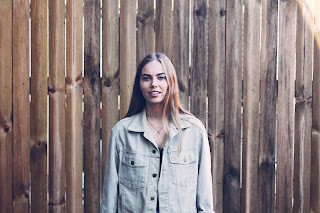 Tayla Young - With The Fire.

Few songwriters can take you on a journey quite like Townsville’s Tayla Young, shining bright with the release of her captivating new single ‘With The Fire’.

Delicate and carefully crafted, ‘With The Fire’ builds steadily from it's stripped back, folk driven intro, to it's fully engrossing, dreamy indie rock finale. Citing Julia Stone and Paul Kelly as key influences in her writing style, it’s no surprise her narrative is vivid and vibrant. Minimalist guitars and drums make way for Tayla’s entrancing vocals, her wholly relatable tone and storytelling making it impossible to turn away.

"Fireplaces are something you would never find where I’m from and when I wrote the song I was desperate for the exact opposite of where I was," Tayla explains, "'With the Fire’ is about being in a long distance relationship and missing the person you love and their family. There’s a bit of self reflection in there as well as to why I left and my struggle with being back in my hometown with my own family."

It's been a big few months for Tayla - her debut single ‘Southbound’, originally recorded in 2016 and posted as an online live-sung video recording, quickly received over 200,000 views, later skyrocketing up to #16 on the triple j Unearthed Roots charts when she officially released it in April this year. Shortly followed by ‘Crime Of Comparison’, an entirely acoustically performed track, the single has cracked over 500,000 streams on Spotify thus far, having been added to their huge global ‘Alone Again’ and 'Stations: Heartbreak' editorial playlists.

With just a handful of releases, Tayla has shown off her adept talents masterfully and managed to pronounce herself as one of North Queensland’s rising songwriters. With plenty more up her sleeve, it’s time to get amongst her exciting narrative! 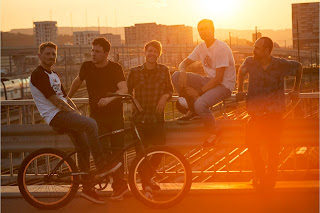 Half-Swiss, half-German band, Gran Noir follow on from their successful album ‘Electronic Eyes’ (boasting a Spotify Rock Rotation takeover with almost 1 million streams, and airplay across the world), with new single ‘On And On’.

Formed in 2011 in Bejing the band, made up of Pascal, Matt, Rey, Nils and Phil, cast a blend of alternative indie rock, punk and bittersweet melodies as they present their latest release. 2019 has so far been a rather turbulent year for the band; forged plans were suddenly thwarted by fate. «Shit happens, life happens…», and then they asked themselves: «What is this really about? Making music, without stress.» And that's what they did.

The band worked in the Alterna Recording Studios in Basel with an old friend and companion, Philippe Laffer (Supernova, Zhivago), an expert on buttons and controls (Crimer, Kaufmann, One.Sentence.Superviser, Panda Lux) to venture into new territory.

Despite the sombre theme of ‘On And On’, more than a spark of hope shimmers in wonderfully arranged guitar, violin and vocals. ‘On And On’ keeps its promise: Gran Noir didn't let themselves be pulled down, didn't give up, persevered, set the focus anew and have emerged stronger from this pivotal year.

The accompanying music video was produced with love by the band, with the Swiss World Cup downhiller Annina Bruehwiler and Mario Hickethier. The remote Black Forest hut from childhood is a place of remembrance of an old friendship that was torn from this world far too early, every crack in the wood panelling is permeated by long evenings and shared history. The unique pictures of the Julier Pass in Graubünden show that the deep connection with life is a constant outdoor adventure.

The band felt how something so valuable can quickly disappear. With resolve to live in the present moment they recommend this maxim with ‘On And On’. 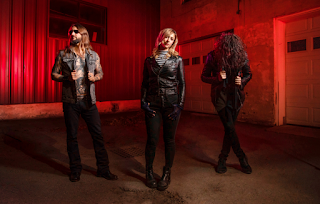 Damone is an alternative / pop / rock band from Boston MA. During their successful career, the band released 3 full length studio albums, most notable being Out Here All Night on Island/Def-Jam, and toured internationally in the 2000s. The band worked continuously to achieve ample musical accreditation in a short amount of time before disbanding in 2008.

Now, after more than a decade the surviving members are making an emotionally charged comeback with heartfelt new music and a captivating live show.

Currently sharing their glorious new single "Moon and Stars," the band is back and better than ever. With swirling melodies and harmonious vocals, Damone proves quickly once again that they have staying power. 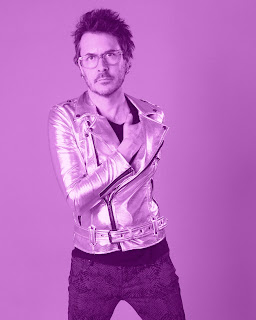 Rue tells us - I made this video for "Chelsea" over the weekend with footage I shot at Zion, Arches, and Grand Canyon National Parks, as well as footage from Manhattan. I tried to incorporate the ghostliness of Phoebe Bridgers's lyric (ghost of Nancy Spungen speakng to Sid Viscious - my interpretation ) into the visual style. I really attached to the line "I won't be home." The video changes tone at the bridge in step with the music.

The electric guitar at the start of Chelsea comes in like a thunderstorm on the heels of my last synth heavy single Make Me Feel. The song’s different sections are in fact constructed to mirror the parts of a tropical storm. The notes for Phil Joly, mixer extraordinaire, began “This song should sound like a hurricane.” The desire to capture the violence of nature comes from Phoebe Bridgers’s excellent lyric. Chelsea is a cover of her folk ballad. Musically it’s opposite end of the spectrum but the energy and Shakespearean attempt to mirror the human condition are drawn from her words.

Chelsea temporarily abandons the 80s sound I’ve been chasing and finds inspiration from a mixtape of 70s rock n roll as well as 90s grunge. It’s a loud and audacious goodbye song that is perfect for the end of summer. 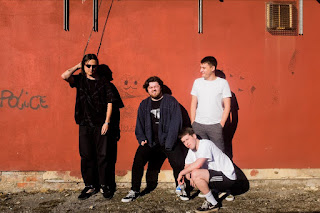 Implementing a new string to their sound can be a tricky procedure for a band, but Plaza have nailed it on new single ‘See’. By no means an extreme departure from the icy tones of their self-coined ‘post indie’, it nonetheless brings in new influences, and slows the pace right down. Tentative calls to Frank Ocean arrive alongside traditional key touchstones in Foals, DIIV or Wolf Alice.

It’s not a sudden change, with the evolution happening in public through live shows, as songwriter and Brad Lennard elaborates:

“‘See’ has been in the inventory for a while now. It’s a chilled song, played on keys, so a change in style for us. You move on from your favourite band or artist and start exploring new avenues, a lot of tunes that I write now are  this kind of vibe, which is a new direction - having the opportunity to write music like this with us all in a band is class.

The EP is the most open Plaza have been to date. It’s easy for bands to write obliquely, wavering around heavy points reticent to tackle them head on – which is more than understandable, as so much artistic inspiration comes from a deeply personal well. This time around however, explosive Hartlepool post-indie quartet Plaza refuse to compromise in expressing their truth.

Whilst this sounds disconsolate in sentiment, in listening to the tracks you can hear the release and catharsis it offers, generating an emotive layer to the spacious grunge-meets-dream-pop style the four-piece have carefully cultivated over the last few years. Spiky guitars and a sprinkling of electronics, driven forward by a skittish beat, provide the layer for Lennard’s confessional vocals.

The quartet have built up a cult live following across the UK, also drawing attention from Huw Stephens and Phil Taggart at BBC Radio 1, alongside John Kennedy at Radio X – with the likes of DIY, DORK, The Line of Best Fit, Clash and Wonderland singing their praises too. 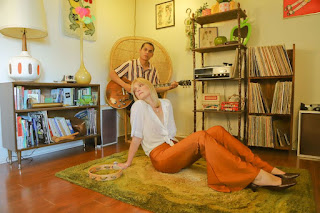 Desert Sparrow is Kylie Adams and Dave Carreno, respectively hailing from the beaches of Sydney, Australia and Dana Point, CA. Blending their eclectic love for ‘60s rock n’ roll, folk, spaghetti westerns, and surf rock, Desert Sparrow spin narratives out of the solitude, hardship and perseverance on the desert roads and coastlines of California.

Before meeting each other, Adams began as a pianist, but quietly fell in love with singing after being raised on Stevie Nicks songs. After losing a bet years later to a friend and singing karaoke to a packed restaurant, Adams realized her calling as a singer/songwriter. Meanwhile, Carreno was similarly a late bloomer, buying a guitar at 21 after seeing Black Rebel Motorcycle Club perform.

After meeting at a Coachella party back in 2011, Kylie and Dave began playing together in earnest at friends’ parties. At a particularly fateful performance at Kylie’s dad’s birthday party, the mother of celebrated Australian duo Angus & Julia Stone encouraged the duo to begin writing and performing their own songs more. Since then, Desert Sparrow have relocated to Los Angeles, assembling a backing band and putting out two EPs along with a handful of singles, including “Karma.” 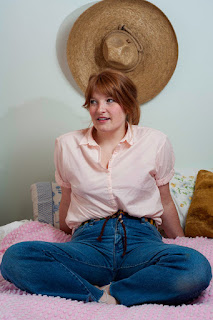 'The Real Moon' captures Barry's compelling way with lyricism and solicitous outlook on the world, finding a musical footing somewhere along the paths carved out by Harry Nilsson, Burt Bacharach, and Emmylou Harris. The vintage analogue synth, gentle acoustic guitar, flourishes of horn and overall feel of 'The Real Moon' are contrasted by the track's contemporary narrative.

"I was spending most of my time alone when I wrote 'The Real Moon,'" says Jennah. "The song is about the very modern problem of seeing too much of the world without actually leaving your house. It’s about experiencing the fragility of reality."

This new cut highlights Jennah's first foray of 2019 following 2018 single 'Roller Disco' (playlisted at New Music Friday, Outliers, Indie All-Stars) - before this, she first built audiences across Canada and Europe with her 2012 debut album Young Men (tipped by CBC, Exclaim, HypeMachine) before having to halt her career in music with emergency vocal surgery.