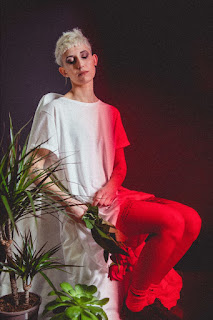 "Wanna Be Basquiat", a song by Surma and a collage animation by Joao Pombeiro

Débora Umbelino is 24 years old and its known by its artistic name “Surma”. She was born in a small town near Leiria, Portugal and started having some musical adventures soon. While studying in the high school she won a band contest ZUS! with her first band “Backwater and the Screaming Fantasy”. Lately she started her solo project and soon started touring and having attention from the national media.

She attended a jazz course in Hot Club Lisbon, specialized in double bass and vocals. Later started an audio-visual post-production course in Restart. The release of her first album “Antwerpen” earned the immediate attention of the media and great national festivals.

In the last two years she had 200 shows through 16 different cities around the world. From the North-American South By South West to the NYC Indie Week, from the Dutch Eurosonic Noorderslaag to the French MaMa Festival, from the Icelandic Iceland Airwaves to the Brazilian SIM São Paulo, from the Austrian Waves Vienna to the German Das Fest and from the Spanish ARN to the Slovenian Ment. Her album was edited in several European countries, nominated for best independent album by IMPALA (Independent Music Companies Association) and got featured in high reputation media companies such as BBC, Musikexpress or NPR.

Also, in this two years Surma played in small and large venues and festivals such as NOS Alive, Vodafone Paredes de Coura, Bons Sons, Super Bock Super Rock and NOS Primavera Sound. Collaborated with several artists and other musical projects such as “Concerts for Babies” and wrote some songs for the soundtrack of a Portuguese movie ”SNU”.

In the end of 2019 Surma is releasing a EP where she revisits her first songs written as a solo artist and prepares a second album with new songs. 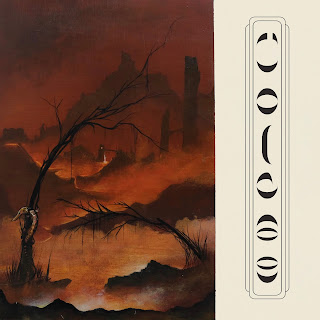 Canadian Avant-garde folk artist, Mappe Of - a moniker for Tom Meikle - is today sharing the video for his new single, ‘Volcae’. Trailing the mesmerising sounds of both ‘Faesulae’ and ‘Unkno’, this the latest track to be taken from the artist’s sophomore album, ‘The Isle Of Ailynn’ which is out now via Paper Bag Records.

Recorded at Bathouse Studio, Ontario (operated by the multi-award-winning Canadian band, The Tragically Hip) with longtime collaborator Will Crann and engineer Nyles Spencer (Broken Social Scene, Gord Downie), The Isle of Ailynn documents a fantasy world through nine different landscapes that draw parallels between a mythological space and everyday conflicts, troubles and fears within our lives. Sonically working in a similar space as Radiohead’s ‘Pyramid Song’, ‘Volcae’ presents a recurring lyrical motif - “I was born in magma” - under a spell of violins and haunting electronics. Repeated in such a fashion, the phrase appears as something of a slogan for the post-9/11 generation.

Meikle says this of the new single: "Volcae is the dark crux of the record, set in a village under the black mountains of the Isle. Amidst a fog of overarching tension, as the powers that be use the village as a scapegoat for their wrongdoing, lies a story about a father's suffering. After the loss of his wife to mental health issues and raising a daughter into terrifying circumstances beyond her control, he finds himself questioning nature at its core."

The Isle of Ailynn looks to follow-on from the Toronto-based artist’s critically acclaimed 2017 debut, A Northern Star, A Perfect Stone (tipped by Stereogum, NPR, Consequence of Sound and Paste) marking a more focused theme and progressive understanding of genre and songwriting. Meikle’s debut release would find him on tour with the likes of Martha Wainwright and Bahamas whilst amassing over five-million streams on DSPs. UK dates are set to follow the new release in early 2020, these to be announced shortly. 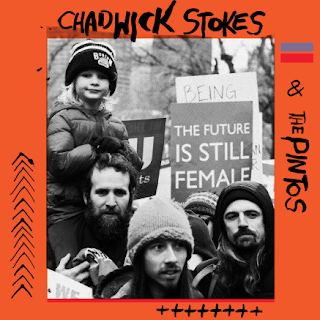 Chadwick Stokes & The Pintos - Blanket On The Moon.

Chadwick Stokes has announced his self-titled record with his band The Pintos that tackles personal and political territory in ways that feel intimate and urgent. Set for release November 15, 2019, Chadwick Stokes and The Pintos brings the complications of history into conversation with the turbulent yet—from Stokes’ perspective—hopeful present. “We’re living in a crazy time, a very upsetting time,” says Stokes. “If we’re not protesting, there’s a problem.” Having tested many of these songs on the road over the years of touring, Chadwick Stokes (frontman of popular indie rock band Dispatch) has created an almost timeless quality to these refined and reimagined studio versions.

The writing in Chadwick Stokes and The Pintos notes intense struggles—personal, ethical, political, or cultural—that have always galvanized Stokes as a listener and artist. Along with the announcement, Stokes has released the first two tracks “Joan of Arc” and “Chaska”. Written about the famed teenager from her first vision to her execution for wearing men’s clothing, “Joan of Arc” is a timely feminist anthem that sears with hope and empowerment. “Chaska” is a story of mistaken identity wrapped up in the largest mass execution on United States' soil.

Other tracks on the album include “What’s It Going To Take,” “Love and War,” and “Blanket on the Moon” which discuss relevant issues such as the gun violence epidemic, PTSD, and America’s current immigration policies.  Other tracks like “Sand From San Francisco,” “Hit the Bell With Your Elbow,” and “Lost and Found” discuss disconnected relationships and the power of choice.