November 05, 2019
We have the brand new E.P from LIA entitled 'Vasilia'. Her striking vocals, at times intricate musical backdrops and more often personal yet highly relatable lyrics, are at the least beautiful and occasionally simply incredible. === From Deva St. John we have 'The Information Age' which opens with synths, Morse code and drums and explodes into action with energised vocals, as this feisty alt rock song grabs hold of our ears. === Steve Buscemi's Dreamy Eyes returns for a fourth appearance here with 'Moon' the second single we have the pleasure of sharing ahead of a new album due next year, from this gorgeous indie pop/rock band.

"I wrote this EP as I was coming into myself. It was a period of my life when I learned how to love myself and what it meant to show myself respect. The root of this EP grew from the word resilience; Resilience in my mental health, as a woman and in my relationships. Upon building the lyrics and the universe of this project, pieces of inspiration found their way to me. I wrote Out of Control based on the story of Hansel and Gretel. I wrote Milk & Light from the story of Vasilisa The Beautiful. I wrote Kissel Shore from the folk tale about the land of Milky Rivers and Kissel Shores that I discovered through the photographer Uldus Bakhtiozina".

As a child, I was surrounded by story. One in particular was from a computer game called Baba Yaga. More recently, I decided to read the actual tale behind the character and I fell upon Vasilisa The Beautiful. I felt like her story was an accurate homage to my lived experience emerging from my teens into my early twenties. Trapped by Baba Yaga, Vasilisa has to trust in herself and the universe to face seemingly impossible high-stakes tasks to gain her freedom.

She prevails and Baba Yaga sees that the universe is on her side so she’s too pure to kill. I realized I was the one trapping myself. I was accepting relationships that didn’t make me feel good, binge-drinking and not trusting that I was capable enough to achieve the goals I wanted. I was battling depression and anxiety. I felt isolated and helpless. I had to start showing myself love. This EP is the mental diary of my transition into loving and respecting myself. These are the lessons I learned living the tale of Vasilia." 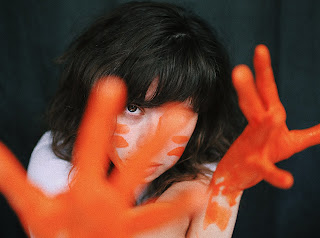 “I wrote ‘The Information Age’ after spending way too long comparing myself to other people. I was beginning to feel my self worth deteriorate with every passing post; watching people I love allow misinformation to cloud their judgement, while knowing the media I’m consuming is probably just as manipulative; seeing the growth and decay of important news due to a lack of any public attention span; watching entire gigs through an audience member’s phone screen. It’s become so easy to distract ourselves. I wanted to remind people that a hive mind isn’t the answer, especially when your Queen Bee is a sewer rat.”

‘The Information Age’ is a sarcastic salute to the often oppressive nature of social media, and how it distracts and divides us as quickly as it informs and connects. Channelling the grit and bratty energy of spiritual forbears like Patti Smith, early PJ Harvey and Juliette and the Licks ‘The Information Age’ captures the claustrophobia of low self-esteem. In a world where our self-worth is being buffeted daily by a relentless barrage of content, the song examines the consequences of our internet addictions on our personal wellbeing. In the clash of its drums, the protean guitar lines and in Deva St. John’s angsty lo-fi vocals, she restores a sense of what it means to be human under the dehumanising glow of the LCD screens all around us. ‘The Information Age’ was recorded with Clem Cherry at London’s Eastcote Studios and mastered with John Davis at Metropolis.

Born in London to American parents and raised in Berkshire, Deva St. John’s sound is a bridge between the soundscapes of British and American pop culture. A peerless vocalist and authentic lyricist, her boozy lo-fi alt-rock production and gnarly vocals reveal an artist who channels her sensitivities into songs that peer under the veneer of modern life to express something fundamentally timeless, a yearning dissatisfaction; rock n’ roll in its purest form. ‘The Information Age’ will be Deva St. John’s third single since her debut release ‘Afterlife’ in October 2018. In the year since, Deva exploded onto the London gig circuit, spending the summer refining her performing nous in front of a steady growing audience. Having most recently performed for Sofar Sounds at the end of August, with a Youth Music award nomination to look forward to this month, and a headline BBC Introducing show in November, Deva St. John is one of the country’s surest rising stars, and she won’t slow down for a minute. 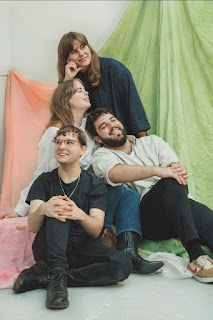 Behind the odd name Steve Buscemi’s Dreamy Eyes you’ll find one of the most promising new bands on the blooming Swedish indie scene. The quartet returned this summer with the new single Change of Heart, their first in 19 months and first taste of their forthcoming debut album that is expected to be released early 2020. Now comes yet another shimmering slice of what's to come with the catchy single Moon, out now via Rama Lama Records.

Steve Buscemi's Dreamy Eyes on the song:
"Moon is a song about new beginnings. For us, that beginning was getting back together in the rehearsal space after a 6 month hiatus to write new material. Furthermore, it's a song about rekindling the spark in the things you are passionate about, but also a celebration of our relationship as a band, the things we've been through, and the things we look forward to continue experience together."

The band formed in 2015 after bassist/vocalist Tilde Hansen tweeted out "Does anyone/anybody know someone who wants to play in a band together with a bassist and a singer (Siri) that haven’t played in a band for a year and are dying of boredom?", which Elias Mahfoud (guitar/vocals) responded to. Elias then reached out to Edvin Arleskär (drums) whom he had met through an Arctic Monkeys forum, thus making Steve Buscemi's Dreamy Eyes complete.

Debut track Desire was released early 2016 and has since then been followed by three more singles, receiving attention from both Sweden’s biggest music sites and influential international sources such as DIY, Billboard and Amazing Radio. In February 2017 Closer, featuring Rama Lama Records label mates Melby's Matilda Wiezell, made it to the top 10 on the Spotify US Viral chart and Dreaming of You followed the success shortly after being praised as "one of those rare ”wow” moment" by The Revue.

The band made their festival debut at Umeå Open playing alongside some of Sweden's biggest artists such as Amanda Bergman, Solen, Säkert! and more, Swedish magazine HYMN hailed the show as "the festival's most energetic". Debut EP Four Waters with four brand new tracks was released on November 24th 2017, being described as “an illustration of the sonic genius of the little band with the great name, who in less than a year continue to leave us speechless with their music”.