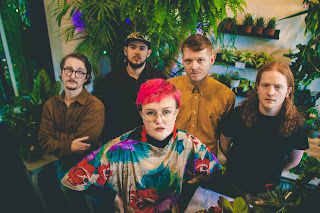 Leeds art-rock quintet The Golden Age of TV released explosive, abrupt new single ‘Me, You And A Dog’ on February 6th ahead of their debut self-titled EP, dropping March 13th. Opening solely with Bea Fletcher’s impressive vocals delivering the chorus hook, before the gritty, analogue instrumentation comes crashing in, there’s no time to be left wondering. The immediacy is compelling; it’s a call to arms from the five-piece, a command to involve yourself in their rapturous world.

Sonically, there’s a call back to intelligent turn-of-the-2010s indie – The Maccabees, Bombay Bicycle Club, The Cribs -whilst occupying the same space as fellow acts re-invigorating hooky, joie de vivre lead guitar music in Orchards, The Big Moon, Sports Team. Bea has a penchant for lyrically nailing relatable themes, with tongue lodged firmly in cheek – and ‘Me, You And A Dog’ follows its title’s lead in its exploration of the way we navigate taking our romantic relationships to the next level. As she puts it:

'It's a playful love song about wanting to take a big step in a relationship. Though, y'know, staying pretty casual about it - hence the lyrics at the end 'if you want to do nothing, that's alright too'. Getting a dog on your own is a big commitment, but doing it with a partner is a nice way of saying you wanna hang out with them for another 10+ years.'

Over just a few releases the band have managed to impress cultural gatekeepers, and steadily build a following. Huw Stephens at BBC Radio 1 is a fan, to go alongside support from 6 Music, BBC Introducing and Amazing Radio. Press wise takes from DIY, The Line of Best Fit and Clash, have positioned them as indie risers to watch, with the buzzy blogosphere also propelling them to attention.

The live side too has seen exciting opportunities for the group. Support slots with Another Sky, CHAI and Marsicans bringing them to a wider audience, as well as performances at Reading and Leeds, Live at Leeds and Liverpool Sound City festivals. ‘Me, You And A Dog’ was produced at Greenmount studios by Lee Smith and Jamie Lockhart (The Cribs, Easy Life, Pulled Apart By Horses), and is out on February 6th ahead of debut EP ‘The Golden Age of TV’, out March 13th. 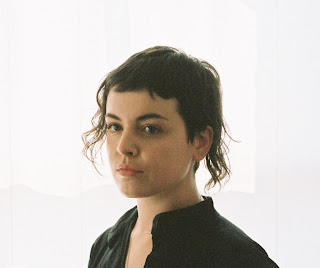 London based singer, songwriter, and producer ROCH is sharing ‘T-Rose’ – the latest single from her upcoming debut album ‘Via Media’ (out March 6th). Alongside the new single ROCH is today announcing a headline show at London’s Servant Jazz Quarters on April 9th. With a sound that is completely unique, ROCH’s (aka Kate Miller) spiralling pop creations are truly something to treasure. ‘T-Rose’, released today, occupies a darker, more melancholic space. Bringing together ROCH’s hushed vocals with a moving piano motif - Miller contemplates childbirth and motherhood: “What happens if I have a child, or lose a child?”

Speaking a little more about ‘T Rose’, ROCH said: “The song is about an absence of a child / loss of one and a common feeling of once someone/thing is gone you feel you have more to say to them. This is the most intimate and pared back song on the album. I wanted to capture the domestic setting where I made the album by recording conversational dialogue between the people (young and old) in the studio. This theme will carry on through a visual that will accompany the song.”

Fascinated by crossovers of space and language, and by rethinking the “mundane and ubiquitous ideas” found in every day life. The bridging of grand scale and domestic scale is a concept Miller has been exploring in her work since her time studying performance and sculpture at University of the Arts London’s Central Saint Martin’s college, and continues to probe in the impassioned synth pop she makes as ROCH.

Miller’s interest in the lofty versus the mundane stems from her religious background as well. “Roch” was Miller’s confirmation name, after St. Roch, the patron saint of the plague. Miller grew up going to Catholic school and studied 13th and 14th century medieval art history in school. She’s captivated by medieval art, patron saints, and religious paraphernalia, and the way those emblems manifest in every day life. “The music is influenced in a lot of ways by sacrifice,” Miller explains. In line with depictions of Catholicism and sainthood, the songs on ROCH’s debut album, Via Media, often deal with sacrifice of the body—taking that quintessential religious image into the every day. Instead of the sacrifice being for God, it’s for family, career, or comradery. “Rather than this saintly sacrifice being these dramatic Catholic ascension-type scenes, it's work, labour, pregnancy.”

Store Front - Rip The Price Off.

Five-piece New York group Store Front is releasing their debut EP Task on streaming platforms everywhere February 14. The five songs that make up Task are hook-forward pop songs about trying to make something of a life that feels squalid (sometimes in a great way). Laura Snapes of The Guardian says EP opener "Rip the Price Off," which was previously released as a demo, unites Sonic Youth and Stereolab calling it "louche yet invigorating," and Brooklyn Vegan’s Bill Pearis says it sounds "...a little like Everything But the Girl by way of '90s Liz Phair."

"Task is about making private jokes in your head about all the big concerns you’re trying to keep track of, especially in the cases when those things are supposed to feel gravely serious," says singer Amy Rose Spiegel. "'Rip the Price Off' is about feeling like you have to be successful on other people’s terms, which is both a sick joke and sometimes an actual fact." Later on the EP, she says, "'I Would' is a sweet, upbeat song about pretending you want to be alone when what you love most of all is other people." 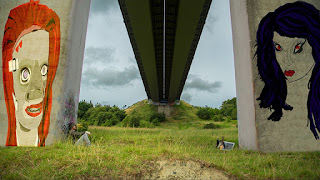 Helmed by frontman and main brain Stephen Cassidy, and produced by Nail O’Doherty, “Duga 3” is a sonic cycle through grunge up guitar riffs and consistent, persistent percussion at its feet.

“This is a spiritually coherent, no-frills, bedroom-produced, genre-splitting musical narrative,” Cassidy says, laying bare the genesis of both the track and the nine songs that precede it on the record. “There are melodies and rhythms that trade places in ambient, rock and dystopian electronic soundscapes.

“There are echoes of early 90s Baggy and House to be heard, re-remembered like foggy dreams.” - “Duga 3” and Back from the East are available now. 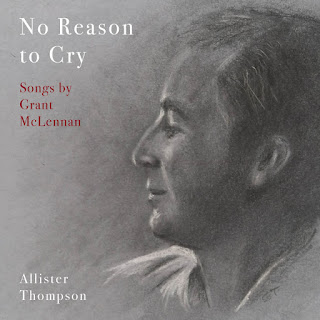 Background from Allister - I appreciate this opportunity to present the album “No Reason to Cry: Songs by Grant McLennan,”  by Allister Thompson, which I am releasing Feb. 20, 2020.

I have recorded 11 songs by the late co-frontman of the legendary Brisbane indie-rock pioneers The Go-Betweens, from his time with that band, solo, and his Jack Frost project with The Church’s Steve Kilbey.

Grant McLennan died in 2006, and I remember well how sad I felt as a longtime admirer. In 2019, since I’d always felt an affinity with his work both as a listener and a player, I decided to record a cover version; that 1 song turned into 11, since they all just started coming to me.

Each song is in a new arrangement, some more of a departure from the original than others. I am a singer-songwriter from North Bay, Ontario, Canada. I record in various genres, including folk, ambient, and psychedelic music. 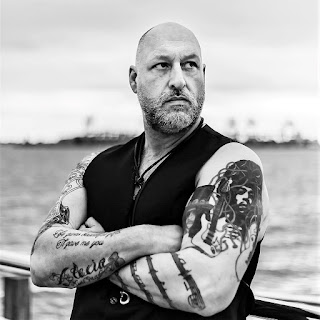 Paul Louis Villani - Before I Go.

“The title of the album accurately prepares any listener for a mix of emotional folk, lo-fi, pop/hard rock acoustic/electric styles that reflect the writers’ current lifestyle challenges and observations”   - Paul Louis Villani.

Be prepared to be taken on an emotional roller coaster ride where the only source of truth is reality without softening filters.

Before I Go - A week in the life of someone who cannot stand being themselves can be torturous. Add into the equation someone who is trying to help but being let down time after time. The end result is separation for the sake of clarity and stability, perhaps leading to an end of unity. So be it.

Sobranie in Russian means “meet together”, an appropriate word for the coming together of music, verse and minds of Nastya and Kirill, the masterminds behind Sobranie 8 18. Following in the wake of Sobranie 7 17 a now extinct dark electronics project and alongside Nastya’s solo project, Sobranie 9 19, Sobranie 8 18 has become the main effort of the duo. The figures 7 and 17 are sacred numbers - the other figures represent the artist’s intuitive associations with the variety of music genres. Influenced by dark techno, new euro pop, field recordings and experimental sounds, Sobranie 8 18 is the clearest manifestation of their musical manifesto.

A world away from their debut LP, Demons, the Angel and Dark Thoughts, they explain their new self-titled release;

“We have been working on it for about 2-and-a-half years. Our composition principle was to make sure that each song was as distinctive as possible. This title is probably not even an ‘album’ in a generic sense but rather a collection of songs because every track is very different.

It was the first time we used live instruments. With the help of our friends we have recorded bass guitar, sax, flute, male and female choir trio, harmonica and piano, adding all this to the electronic sound made by Elektron Analog Four among other synths. We also used a recorder to capture some of the instruments, our homage to the low-fi sound and a way to say ‘goodbye’ to it.  We’ve been inspired by many things - music, movies, feelings, hometown atmosphere and intangible things one can just feel”