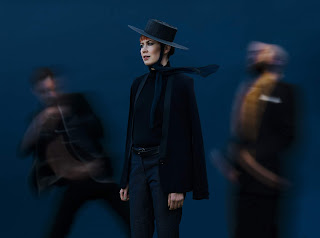 After "Ready Shaking Silent" and "Body of Water", Hundreds now share their third single "Calling" from the upcoming album The Current, which will be released on March 27th on Embassy of Music.

On their fourth album, the siblings Philipp and Eva Milner know how to weave the organic with the electronic like few in the German pop landscape. They underlay great melodies and emotions with a steady pulse of electronic beats and synths that quickly gets under your skin. In this respect, The Current has even more facets than the previous albums, the timbre is brighter, the attitude more combative.

Soundwise, the courage to try out new things is most evident on the single "Calling". It starts with little more than the Hundreds DNA: Philipp's synth flickering, a beat that still has to decide whether it wants to appear euphoric or threatening, and Eva's longing, strong, yet cool and dramatic voice. And then suddenly, after 90 seconds, right after a break in which you can only hear Eva, a wind section suddenly burst open the song, a stadium-pop moment, which at this point doesn't seem cheesy at all but rather like a kind of positive battle cry. Which is partly because of Eva's words: "I’ll raise another banner I’m raising my own banner.“ That this point is so momentous is also due to the contrast to the theme of the song and lines like this: "I see you falling / falling apart / falling for yourself / and the stories you’ve made up I hear you howling in the dark and I won’t take part.“ What Eva describes here is nothing less than the moment of the struggle to break free from an emotionally unhealthy friendship to a person who turned out to be a chronic narcissist.

In the official video that was shot at the Baltic Sea, in the Wendland area of Germany, Eva takes the meaning of ‘Calling’ to a deeper level. Effortlessly striding across the beautiful landscape, she waves a red flag warning foes to keep their distance: "Raise your voice, discover your own strength, leave people behind you who are slowly poisoning you and 'raise your banner’! 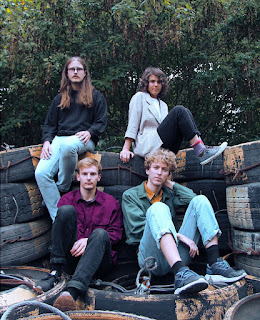 Melby - Things I Do When I'm Alone.

Stockholm four-piece Melby have constantly been growing since their debut with catchy single 'Human' in 2016. Last year, the band took their biggest step yet with the acclaimed debut record 'None of this makes me worry' which was followed by tour dates all over Europe. Now, the band are set to return with new single 'Things I Do When I'm Alone' which is out now before the band head off on yet another tour that will see them play dates in Denmark and Germany.

The band often gets comparison to fellow Swedes Dungen and Amason but Melby’s dynamic sound, with influences from folk, psych, indie and pop, stand out. The quartets light, semi-psychedelic folk pop is led by Matilda Wiezell’s enchanting voice which fits perfectly with Melby’s unique musical landscape - a sound that's been called "otherworldly, and wholly brilliant" by The Line of Best Fit. The band consists of Wiezell, Are Engen Steinsholm (back-up vocals, guitar), David Jehrlander (bass) and Teo Jernkvist (drums) and formed while living together in a Stockholm shared housing.

Things I Do When I'm Alone is a development of the sound of Melby's debut, building on the more melancholy folk inspired sides that were showcased on None of this makes me worry without losing the playfulness and sense of melody that always have been a vital part of the band's sound.

Melby on the track: "Most of this song was recorded in kind of strange places: the staircase leading to our rehearsal space, and a friend's living room. This made us much less picky than we usually are. And it was easier to feel happy with what we did at once when we weren’t in a regular studio. I don’t think we did more than two takes on any track, and we decided on the sound of each instrument instantly. It feels like this gives the track more of a playful quality than our earlier songs have had. I think this mixes well with the themes of the song. You could say it is about longing for a sense of community, and to live with other people." Things I Do When I'm Alone is out on Rama Lama Records (ROW) and Sinnbus (GSA) now. The track was recorded with and produced by Alexander Eldefors. 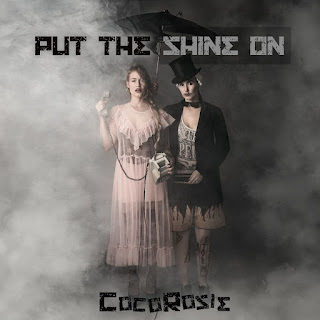 CocoRosie - Put The Shine On (Album).

Sister duo CocoRosie (Sierra and Bianca Casady) release their seventh album Put The Shine On via Marathon Artists. With stand out tracks such as “Smash My Head” including a Bianca Casady-directed video, “Aloha Friday” and “Restless” which includes a rollerskating fun video (directed by CocoRosie), the band have paved a new way for their follow-up to their 2015 album Heartache City.

Dear Ones. Let us celebrate together the release of our 7th Record! (Can you imagine we have been a band for 17 years?!) “Put The Shine One” means a lot to us and contains much of our heart & soul. Cheers to new light! And new love! Love, CocoRosie

Summer 2019 saw CocoRosie return first via a collaboration with Chance The Rapper, “Roo” (co-written, produced and performed by CocoRosie)on his album, The Big Day. CocoRosie’s music has influenced a wide variety of artists over the years - besides Chance The Rapper, from Melanie Martinez stating the sisters are a major inspiration, as well as Jay Rock on “Knock It Off” and Macklemore/Ryan Lewis on “Stay at Home Dad” sampling their music, to respected artists like Yoko Ono and Jim Jarmusch praising the sisters.

CocoRosie is the music-based project of American cross-disciplinary performance artists Sierra and Bianca Casady. Their songs blend a myriad of styles and references, from hip-hop to folk and opera, shaping the most painful of experiences into memorable and evocative pop songs. Taken as a whole, CocoRosie’s music is an ongoing psychologically intimate dialogue between the siblings. Each sister has multiple personae and vocal styles; Bianca delivers troubadours-style rap while Sierra often responds with ethereal tones while accompanying their voices on harp, piano, or guitar. A quintessential part of their sound is a percussive landscape made using children's toys and other found objects which adds a particular nostalgia to their songs.

Finding expression for their ideas in other disciplines beyond the traditional musical parameters is paramount to the sisters - and often a source of inspiration for their songwriting. In addition to their album tours and festival performances worldwide, Bianca has held solo exhibitions of her artwork in NYC at Deitch Gallery and Cheim and Read. Bianca has created  “Nightshift,” a dance-theater production and Sierra wrote and performed “Soul Life,” an experimental opera, both staged at the Donau Festival in Krems which they curated in 2012. Continuing on her path to become a theater director, Bianca directed two theater plays with the National Theater Academy in Norway and is currently developing new works, exploring new forms of opera and dance where Sierra will play a lead role, to be premiered at the Manchester Festival in 2022.

Sierra has arranged and performed music in collaboration with the likes of the Symphony Orchestra of Amsterdam, The ICA in London and The Sydney Opera House. Most recently, CocoRosie has composed original scores for four full-length theatrical works by Robert Wilson: Peter Pan, Pushkin's Fairy Tales, Edda and Jungle Book. Last year they presented the second series of songs written for a collaboration with the Kronos Quartet at their hometown Kronos Festival in San Francisco.

In their seventeen years as CocoRosie, the sisters Sierra and Bianca Casady have released seven albums: Put The Shine On (2020), Heartache City (2015), Tales of A Grass Widow (2013), Grey Oceans (2010), The Adventures of Ghosthorse and Stillborn (2007), Noah's Ark (2005), and their debut album, La Maison de Mon Reve (2004) -- each one inspiring controversy and debate in equal amounts to praise; such is their fearlessness and willingness to take risks with their art. This strong creative vision runs through every aspect of their work - from videos to live performance utilizing theatrical costumes and make-up - which they create alongside each new body of songs. 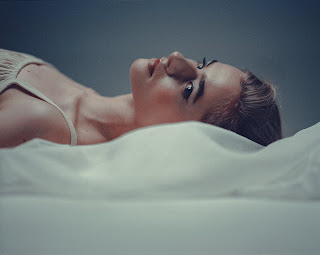 Rosie Carney - When I Look At You.

Following her critically acclaimed debut album Bare, Rosie Carney returns with new single “when i look at you.”, the first single of upcoming EP i dreamed i was the night. With more than 2 million monthly listeners and over 70 million streams on Spotify, Carney’s debut album ‘Bare’ received praise from The Line of Best Fit (9/10), Mojo, The Sunday Times, PASTE, NPR and Uncut. Written after the release of Bare, Rosie created a collection of dark folk songs which she recorded in New York with Thomas Bartlett (Doveman), known for his work with Sufjan Stevens, Vagabon, Florence + the Machine and more.

The first single ‘when i look at you’ is being released with an accompanying video. It’s another intimate moment from Carney in a first choreographed visual pursuing the song’s themes: “heartbreak, betrayal and destruction. All of which I have inflicted on myself for as long as I can remember.” She explains; “I never felt comfortable being in front of the camera, it’s like I wrapped myself in chains, and I knew in order to really tell this story I had to break myself free from them.”

It’s a further exploration into the effects of her past which she so devastatingly conveys on Bare. The album received a critical acclaim from the press with NPR writing “her songs feel lived-in and worn, conveying a bruised ache well beyond her years… the weary grace of a survivor who’s located the source of her strength.” This was echoed by the outpouring of messages from her fiercely expanding fan base as it resonated globally.

Throughout the period from her being discovered and signed the age of 16 to Bare’s release, the only constant was the catharsis that came with song writing: “I see my songs in images as I write them, so I knew as I wrote this song that I would be in the video, something I’ve never done before. I knew I wanted to move my body (again something I’ve never done before) but I knew I had to do it in a way that would tell the story of the pain and fear I've been through both physically and mentally over the past 10 years.” Alongside dance partner Tylor Deyn, she uses subtle and minimal movement in order to portray the discomfort she has lived with for some time, “just before the shoot, I was diagnosed with PTSD, and honestly since the video, I have been so hooked on creatively moving my body. It’s the therapy I didn’t know I needed.”

“I knew when my mum couldn’t talk to me after watching the video that we had succeeded,” she explains. ‘when i look at you’ is another incredibly personal cut from Rosie, as she fully welcomes the listener into her self-described “weird little world”. ‘when i look at you’ is available on all online platforms from March 13th. ‘i dreamed i was the night’ EP is out April 10th via Color Study, a self-described “personal pop” indie label founded in 2019 by her manager Spencer Kelley. 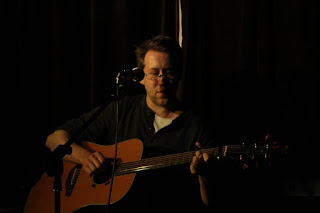 Ross Palmer is a singer-songwriter, multi-instrumentalist, and audio engineer based in south London. He has played guitar, bass and drums in a variety of bands, from traditional English folk to lo-fi rock 'n' roll.

About You Won't Need to Cry - Needing a break from his acoustic guitar and open tunings, Ross wrote You Won't Need to Cry and Hard to Begin to satisfy his urge to play guitar solos and rock drums, and sing lots of harmonies. The songs sound a little like Elliott Smith, or Joe Pernice, or the Posies when they turn their amps down a bit. He recorded and mixed the songs himself at home, playing all the instruments, and invited Melanie Crew to sing extra harmonies on You Won't Need to Cry.