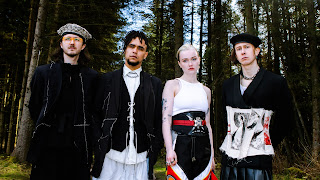 Glasgow's The Ninth Wave release new single "Piece and Pound Coins", a new taster of their next full length body of work, due 2022.

A compelling piece, "Piece and Pound Coins" was produced by the band themselves and mixed by Max Heyes (Massive Attack, Doves, Lucia & The Best Boys, Primal Scream). Amidst a distinctly chilling atmosphere, rolling piano lines weave their way through chugging percussion with the track standing as a stark examination of grief and loss.

Speaking on the release of "Piece and Pound Coins", singer Haydn Park-Patterson said: "I wrote this song about a friend who passed away a number of years ago. I’ve never really felt like I wanted to/could write about him for a number of reasons, but I guess the main one was because that for a long time, I wouldn’t have known what to write. Writing about death is a world away from writing about heartache/love/friendships because there’s nobody to listen to the song and wonder “is that about me?”. It’s a strange feeling, to write a song about someone that you know can’t ever hear it.

The song also touches on the thought of wondering what he’d be up to now, 5 years on in his life, and how weird a thought it is that we’ve all continued on with our lives but his had a start and end point, and that’s it. No more memories to be made. The song also lets out a bit of confused anger that I felt not long after he passed, as I watched how a few people reacted to his death and the way in which they talked about it. That’s the meaning behind the line 'death makes some people sad and some people ugly / and some people took your name for their own sake'. I like to think that he’d like the song, as he was one of the most supportive and positive-minded people I’ve ever had the pleasure of knowing."

The track is released alongside a stunning video directed by Rianne White. She commented: "I feel completely in awe of this song and Haydn’s ability to frame such an immense feeling. Embraced by the catharsis of nature, the heights of grief and identity are expressed through a journey of Haydn’s internal growth accompanied by a symbolically poignant lone wolf. I like to think of Hayden and the wolf as one, both finding their way back to their truest states of being with wild untamed hearts of companionship and eternal loyalty. " 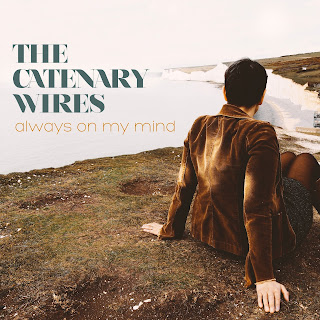 The Catenary Wires - Always On My Mind.

'Always On My Mind' is a track for late summer.   It’s a love song full of warmth and emotion.  An old photograph taken on a late summer holiday transports us back to a perfect moment when a relationship first started.  But there’s bittersweet regret in there too.   In the photograph, the sun’s rays were still warm, but they were getting longer; the colder Autumn evenings weren’t far away.  Did the relationship survive the winter?  And now, is it that person in the photo the one we are still in love with, or are they long gone – leaving us with just a memory embedded in a faded old picture?

The song and the video are celebrations of the fact that The Catenary Wires have evolved from a duo into a five-piece band, where everyone contributes to the rich instrumentation and the blissful vocal harmonies.  The video was filmed by all five members of the band, taking it in turns in the practice room – the first time they’d all been together since the start of lockdown. 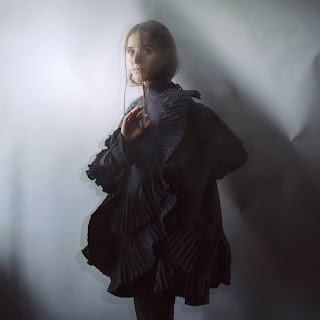 Following on from the release of her stunning 2017 full-length ‘Closure’, an album which was lauded across numerous outlets, Swedish-born but Berlin-based singer songwriter Adna has now unveiled the details behind her next LP ‘Black Water’ with the release of her latest single ‘Darkness Born In Youth’.

Much like her work to date, ‘Black Water’ sees her channel a rich and ambient direction, filled with warm and textured aesthetics. With her smooth and seductive voice layered over a heady mix of bright and enticing production, her latest collection looks set to become one of her most praised to date.

Adna’s latest offering follows on from the unfiltered emotion of ‘Don’t Know’, giving us a clear insight into the understated balladry that we can expect on this forthcoming full-length. Conjuring up more of the raw and poignant direction she is known for, ‘Darkness Born In Youth’ spotlights her soulful presence. Recorded in one-take, the track is accented by softly plucked guitar and her trademark soaring vocal.

Speaking about the new release, she says, “It’s hard not to sound pretentious about it, but this is really just a very honest improvisation that I recorded for my own memory in case I would forget about it. The title refers to the sensitivity I often find myself thinking of as a burden… I guess most people have had to end relationships, wishing it could have been with someone else instead.”

To date, Adna has made three beautifully woeful albums; 2014’s ‘Night’, 2015’s’ Run, Lucifer’ and the album ‘Closure’ in 2017. Supporting ‘Closure’, Adna played a packed Eurosonic showcase in 2017 and toured throughout Germany, UK, France and Scandinavia in the months since its release. Adna’s music has had more than 50 million streams on the large DSPs, and has had her melancholic, lo-fi work compared to the likes of Bon Iver and Daughter. 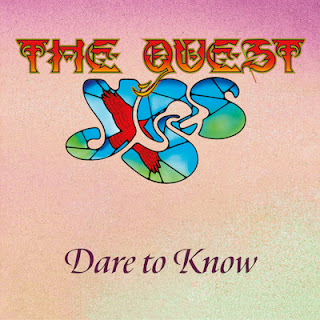 The album was produced by Steve Howe. "Much of the music was written in late 2019 with the rest in 2020. We commissioned several orchestrations to augment and enhance the overall sound of these fresh new recordings, hoping that our emphasis on melody, coupled with some expansive instrumental solo breaks, keeps up the momentum for our listeners,” said Steve.

Steve Howe comments: “Dare To Know presents a guitar theme played within many different arrangements, with different chord structures and altered textures. The 'idea' mentioned in the first verse gets described later as an awakening to the subtle goings on within our bodies and mind, all geared to nature's scheme of things, all fluctuating and rearranging according to the principles of life, as we know it. The centrepiece leaves the orchestra alone to elaborate and develop the way the theme is heard, then augments the closing minutes of the song as it rests, with an acoustic guitar cadenza.”