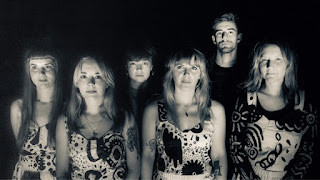 Sheffield bilingual psych/post-punk four-piece Sister Wives have teamed up with Carmarthenshire’s psych duo Tacsidermi for an exciting musical union. The Double A single 'O Fy Nghof' / 'A Oes Heddwch' will be released on limited edition lathe-cut vinyl on 17th December via Libertino Records, and is out now digitally. Both bands wrote the musical backbone to a song each independently, which was then sent over and Tacsidermi and Sister Wives added lyrics and melody to the other's compositions, a truly collaborative project.

Both bands go into detail about the lyrics they provided for each song... Tacsidermi on "A Oes Heddwch": “The song is about facing an armageddon and the panic of not knowing what to do in your final hours. There's no use hiding from the inevitable. There's no use trying to find peace. You must deal with the consequences of your actions.”

Sister Wives on "O Fy Nghof": “The song is about being in a deep depression and the helplessness which is felt in that moment. This does eventually come to an end - the heaviness lifts. However, this is often cyclical and happens again, over time. This leaves us stuck in a constant cycle, which can be hard to accept.”

Tacsidermi are Gwenllian Anthony from the Welsh Music Prize winning band Adwaith and multi instrumentalist Matthew Kilgariff, who craft sublime, evocative Balearic pop-infused psych. Tacsidermi will be returning to the studio before the new year to finish work on their eagerly anticipated debut EP out in January 2021. Sister Wives are a Sheffield-based female four-piece whose sound encompasses prog-flecked psychedelia and post-punk. They recently played at Green Man, Sensoria, and Sŵn Festivals, with more dates in Sheffield and Manchester this winter. New music is coming soon. 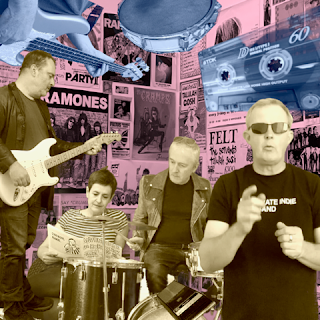 Swansea Sound really just can't stop making music videos. They have a new video and single "The Pooh Sticks" off their debut album 'Live at the Rum Puncheon.' The fact that Hue and Amelia who were in The Pooh Sticks singing a song about how great The Pooh Sticks are / were is a bit next level. So enjoy a bit of green screen fun and let Swansea Sound brighten up the next 2 minutes and 30 seconds of your day.

Swansea Sound: a band that came into being during lockdown and decided that fast, loud, political indiepop punk was the answer to being stuck indoors.  Who needs introspection?

Hue Williams is reunited with Pooh Sticks singing partner Amelia Fletcher (ex- Talulah Gosh, Heavenly). Rob Pursey (also ex-Heavenly) and Ian Button (Wreckless Eric’s live collaborator) provide the noise.  Swansea Sound are the funny, angry, gleeful and savage past, present and future of indie.  The band has played just one gig in real life – but there will be more in 2022. 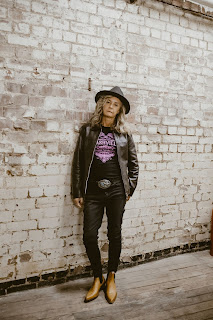 Catherine Britt is excited to announce a brand new signing to her boutique independent label, Beverley Hillbilly Records – welcoming Suz Dorahy to the roster. “Not in my wildest dreams did I think at this point in my life would I be standing here with Catherine Britt being signed to her brand new record label. I’m so very excited for you to hear this new music”, says Suz Dorahy.

The first of an incredible batch of new songs is being unveiled today in the form Suz’s brand new single, “Tell You”. Produced by Catherine Britt, “Tell You”, is a story of betrayal that is laid out simply and strong while revealing much vulnerability. At its core is a sentiment that is instantly relatable and full of stone cold truth.

“It took a mighty blow to crack me to the core”, says Dorahy. “It's that moment of realisation where it turns out some folk are not who you thought they were”. Suz Dorahy is the real deal. An authentic and nuanced singer and songwriter that you need to hear. But that realness didn’t come easily. It had to be earnt, nourished and developed. There were roadblocks all along the highway that needed to be overcome.

Life so often takes a dark turn and nine years ago Dorahy was diagnosed with post-traumatic stress disorder and then depression and chronic fatigue. It was a debilitating time and the songwriter locked herself away and used music as a form of escape. “I spent seven years being a recluse and just tapping into my music because it took me to another place away from the darkness of depression and PTSD,” Dorahy explains. “Music was my saviour.”

Then Dorahy bumped into an old friend, Natalie Henry, who offered her the chance to travel to Tamworth and play with her group The Wayward Henrys. The opportunity was inspiration enough to bring Dorahy back into the light. “I honestly will be forever grateful to Nat, she brought me out of depression, made me believe in myself and changed my life,” Dorahy says.

Enter Catherine Britt who fell in love with Dorahy’s new songs and signed her to the new her boutique independent label, Beverley Hillbilly Records. Suz Dorahy has emerged as a singer and songwriter of remarkable strength and presence. In her music you’ll hear the influences of those  artists and styles that have inspired her. Think  Sheryl Crow, Lucinda Williams, Lori McKenna, Allison Krauss, Joni Mitchell, Fleetwood Mac, old school country and western, Loretta Lynn, Jimmy Rogers, Hank Williams, Bill Monroe.