The Portland, Oregon based country-soul group The Delines have shared the final music video from their upcoming album, The Sea Drift, which will be released on this Friday February 11, 2022 via their new American label home Jealous Butcher Records. The song, a focus track for the album titled “Drowning In Plain Sight”, is a perfect example of songwriter and author Willy Vlautin’s knack for giving you a look into the interior lives of the characters who populate these songs with just a few well-chosen little details.

As lead singer Amy Boone croons lines like “The kid’s ice cream is melting, my husband’s beer is getting warm / The phone starts ringing an hour after I should have been home”, her soulful and smoky voice gives these storytelling vignettes instant emotional heft, communicating years of struggle in the lives of these characters with just a few words, as lush and cinematic country-soul arrangements gently swell around her. Simply put, the music of The Delines not only makes you feel like these characters are real people you could meet in any of the small towns and cities along the gulf coast of Texas where The Sea Drift is set, but that their lives will continue on long after these songs end.

The music video for “Drowning In Plain Sight” combines footage of The Delines performing the song in their home studio in Portland with scenery from those beach towns along the Texas gulf coast that serve as the setting of The Sea Drift. If you’ve never been to a town like Galveston where this video was shot, the visuals will instantly give you a sense of the way the natural beauty of the ocean is juxtaposed with the desperation, regret and wistful longing of the people who inhabit this world. The houses are all on stilts, the sun sets over abandoned train yards and industrial plants, and lights from carnival rides on the boardwalk glisten across the ocean waves at night.

Brooklyn, NY based singer-songwriter Allegra Krieger today shared two new songs from her forthcoming album Precious Thing, releasing March 4th, 2022 via Northern Spy Records. On the two tracks that open up the album—“Wake Me If I’m Asleep” & “Isolation”—Krieger sings about the fear of loss and her hope to live more presently. Inspired by a pang of fear that struck her after seeing the paramedics leave a neighbor’s house, Krieger’s anxiety is palpable, yet her resolve remains strong. Listen to the songs here.

In October 2020, Allegra drove across the country to record Precious Thing in Marin, CA with producer Luke Temple (Here We Go Magic, Art Feynman) and musicians Jeremy Harris, Kalia Vandever, Rob Taylor and Jacob Matheus who contributed organs, synths, bass and lap steel. Delightfully mellow but never bleak, Precious Thing is a soundtrack for the daily motions of our lives.

On Precious Thing, Allegra Kreiger tries to capture fleeting moments in a world that is sick from itself. With a voice that rings like a windchime signaling a storm coming, Allegra masterfully weaves together ephemeral moments as life barrels by her unforgivingly. From singing about sharing a gaze with a man on the train to Coney Island as the clock strikes 12 on New Years, to saying goodbye to a loved one, to processing the religious trauma of wine, Krieger portrays the particular pang of being a woman alive in a modern world.

At the heart of this album is a young, working woman asking “Do you see this right now? I can’t be the only one.” This is an album about looking, and Krieger fills up each lonely space she enters with her gaze. Krieger asks you to look, to really, really look, so that you can remember something, however small it is, when it’s all gone. 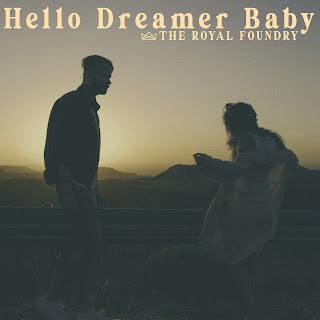 Background from The Royal Foundry - You are made to be that which you dream to be. No matter how you get there, who you meet along the way, or how many detours it takes – it will always be waiting for you, so try and try and try and try.

This is the ethos behind our new single, "Hello Dreamer Baby," written after we took a spontaneous road trip and discussed our dreams, goals, and our desire to accomplish them in the now.

The music video, featuring a sunrise that reveals amazing red rock canyons with each passing second.
.
It's so easy to quit and just live with mediocrity, but this life is short so why would you not want to be the best you can be? We wrote "Hello Dreamer Baby" for us, but we hope it resonates with you too.

The internationally acclaimed Irish performer, Pierce Turner, releases a new single titled “Love Of Angels.” Set over a rocking guitar arrangement, the philosophical track combines the teachings of acclaimed The Power of Now author Eckhart Tolle and the idea of the psychological “ego.” This is the fourth track off Pierce Turner’s forthcoming album, Terrible Good, which was created with legendary guitarist Gerry Leonard (David Bowie, Suzanne Vega, Rufus Wainwright). The album is set for release on February 25 via StorySound Records.

“For me, lyrics always have to have a message,” explains Turner. “On ‘Love Of Angels’ I take the phrase ‘you are what you eat’ and expand upon it to a further truth. We are everything that comes in-what we think, read, see, breathe, smell, hear, and believe as well as eat. If it’s good stuff, you will be good, guaranteed. How we move affects us too, I swear!!!!! You can dance to this. It’s The Rolling Stones meets Eckhart Tolle.”

An Irish-American musician in the truest, and most literal, sense, Pierce Turner lives half the year in his hometown of Wexford, Ireland, and the other half in his longtime adopted hometown of New York City. Both places are reflected in his songs, which frequently move between these two different worlds. Since he began his solo career in the 80’s, he’s worked on a broad range of projects including writing for opera, scoring movies, and composing a contemporary Mass. His genre-bending songwriting has led Turner to collaborate with legendary producer John Simon (The Band, Leonard Cohen, Cass Elliot) on 1991’s Now Is Heaven and composer Philip Glass on projects such as 1986’s It’s Only a Long Way Across and “Yogi with a Broken Heart.”