Beloved songwriter, multi-instrumentalist, and Walkmen co-founder Walter Martin released his new album The Bear through his imprint Ile Flottante Music. His sixth studio album since embarking on his acclaimed solo journey just under a decade ago, The Bear is a poignant collection of autobiographical story-songs that Martin described as "the kind of album I've been building towards for my entire career."

Martin also released today the official video for "Hunters In The Snow." The album opener sets the stage for The Bear, with Martin drifting from scene to scene as if strolling past a series of paintings in a museum gallery. Of the video, Martin stated, "'Hunters In The Snow' takes place in the snowy northern landscapes of my dreams. A city boy's pastoral fantasy of hunters and horses, death and decay, getting lost in the storm, and longing for home."

Written during last year's cold, bleak winter in an old 1800s schoolhouse in upstate New York that Martin converted into a studio, The Bear is an unexpectedly warm and inviting collection, one focused on growth and family and the power of human connection. The songs are gentle and engaging, with spacious arrangements often centered around fingerpicked electric guitars and romantic piano flourishes from Oscar-nominated Minari composer Emile Mosseri. Martin's idiosyncratic vocals are similarly amiable, delivered with the loose, casual demeanor of an old friend who's pleased as punch you decided to stop by.

Like much of Martin's catalog, The Bear is chock full of delightfully vivid imagery and fueled by an infectious love of language, but this time around the lyrics leave more to the imagination, stepping away from explicit narrative forms in favor of more abstract and intuitive streams of consciousness. What ultimately emerges is a lifetime's worth of deeply personal snapshots and reflections all jumbled together, a family photo album dumped out on the floor and gathered back up into a swirl of moments and memories that manage to tell a million different stories all at once. 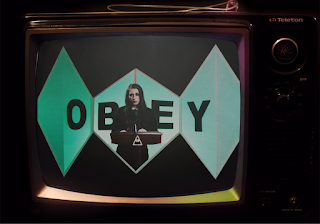 In tandem with the release, YOVA have revealed a chilling, dystopian video for one of its most prominent tracks: “Make it Better”, created with video directors Tom Linton and Phillip Reinking. A track intended to haunt you to the very core, “Make It Better” fuses piercing viola work, drill-like repetition and disturbing visuals that couldn’t be more apposite in the current climate. Talking about the track, vocalist and songwriter Jova Radevska says:

“This song symbolises the society we live in & the culture of "following the leader" wherever that may lead to. We are told “tick that box & we'll make it better". When did we surrender to "make it better" - it repeats throughout the years, new polished promises, talk of a better tomorrow. We become so accustomed to the amniotic state we live in because it keeps the status quo.” Featuring Radevska addressing her audience in front of an “OBEY” propaganda poster, the video makes a timely and impactful statement that touches on themes of control, peer pressures and dictatorship; vividly complimenting the track’s shadowy narrative.

As Radevska adds: “When someone dares to be different & decides to fall out of line, it quickly becomes frowned upon & they're accused of wrongdoing. History teaches us that true change comes from individuals not from governments. The video has a government official doing a speech but her true colours start to show during the speech & when she becomes aware of it she quickly covers her hand so as not to be noticed. Blinded by distractions & consumerism the puppets in the video are programmed to do what everyone around them does. It takes true courage to break off the chain & escape the factory line.”

“‘Stupid Fight’ is a song about wasted time in tension with your partner,” said The Moneygoround’s Dennis Ellsworth (he/him). “It usually ends easily, but in the moment, it brings a frustrating dynamic to the day. These lyrics are very stream of consciousness and lay out the simplicity of the situation, often overlooked by the participants.”

“I see all your mistakes, slow motion as it breaks into our bitter feelings,” Ellsworth sings over a wall of warm guitars and organ drone. “By then it’s way too late, and I’m wishing I could fade off into a fog, but everybody knows it isn’t gonna solve any of your woes.”

“It’s an upbeat song, with a Rolling Stones swagger in the chorus,” he said. “The ultimate point here is to see the frivolous nature of these moments in life, and to show a lighthearted side to the inevitable in any relationship. Nothing is perfect, and that’s ok.”

“Stupid Fight” hails from the band’s debut album, Cruisin’ and Swingin’ with The Moneygoround (out today). Produced by longtime Ellsworth collaborator Joel Plaskett, the album was recorded at Fang Recording in Dartmouth, Nova Scotia.

"Cruisin’ and Swingin’ with The Moneygoround features twelve songs,” said Ellsworth. “The record was done live off the floor in a matter of four days at Fang. The essence of it was to perform these songs as a group, with little in the way of overdubs. The mix was quick and inspired by the idea of letting the music speak for itself.” 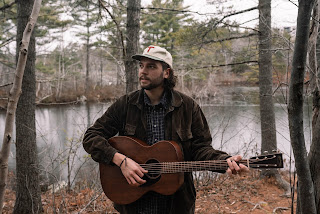 Nova Scotian singer-songwriter Daniel James McFadyen began his musical journey by playing at small, bustling pubs in and around the Annapolis Valley. Daniel's music began to gain popularity after the release of his single "Goin' Back (The Wolfville Song)," an ode to the small town where he began playing music professionally. Daniel now has two EPs under his belt and his most recent album, August, I'm Yours, is nominated for an East Coast Music Award.

"The song is inspired by a man I met in Guatemala while I was playing there a few years back," Daniel explains. "I was playing at a bar on Lake Atitlan in a small town called San Marcos La Laguna. While I was playing, a small man with long black hair approached the stage with a bongo drum; he seemed eager to play. I signaled for him to come on-stage and he joined me. We played for hours together only communicating through music and I found it amazing that he was able to adapt to any style he heard while having no context for this western music."

Daniel tried to communicate with the man in English and Spanish, with no luck. Later, he asked the bartender about the man and found out that the bongo player was from a small village of only a few hundred people who preserve their Ancient Mayan tongue.

"It was hard to imagine being in a situation when I could only properly communicate with a few hundred people for the rest of my life," said Daniel. "A few years later I returned to the lake and I was not able to find the man and the bar had closed down, and I did not even know his real name. It was then I came up with the name "Mr. Lipless" and decided to write a song about him."