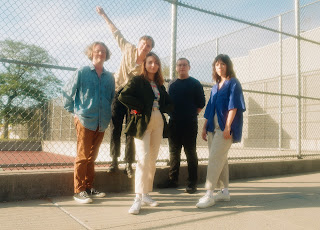 New-York-by-way-of-Texas transplants Why Bonnie release two tracks, “Sailor Mouth” and “Hot Car,” off of their forthcoming debut album, 90 in November, out August 19th on Keeled Scales. Following the sunny “90 in November” and previously-released single “Galveston,” album opener “Sailor Mouth” crashes into existence with a squeal of feedback and a burst of distorted guitar. The track is “about growing around your memories. Your foundation never changes but your relationship to it is always evolving,” explains Blair Howerton. The hazy “Hot Car” is sweltering, with a hypnotic synth line mimicking the way a mental loop of dormant thoughts that surface in the warm cocoon of a car speeding towards its destination in the dead of night. Howerton elaborates: “We wanted to include a contrast to the sunny disposition of the album. ‘Hot Car’ is meant for those quiet, contemplative, solo night drives.”

90 in November is inspired by fellow Texans Townes Van Zandt, Blaze Foley, alt-rock like the Lemonheads and the Replacements, the eccentric pop of Sparklehorse, and Sheryl Crow. Although its tracks were mostly written in Brooklyn,  where Blair Howerton moved from Austin in 2019, they made the record in Texas in early 2021 with Tommy Read (Lomelda, alexalone).

Often, 90 in November is a trip through Howerton’s inner world, but it’s also a road trip through Texas. Often it is both at once. The songs are full of poetic, cinematic lyrics that flash like colorful scenes glimpsed from the window of a car as it barrels along an interstate highway cutting through the Lone Star State, each one a road stop revealing a different facet of Howerton’s experience. The album is a dynamic introduction to a more raw-edged indie sound from a band who have matured from bedroom dream pop into a sophisticated rock act, their evolving sound a reflection of the journey undertaken by Howerton on this vividly rendered collection of songs.

By looking back on her past with fearlessness and compassion, Howerton propels her songwriting forward into new realms of emotional sincerity and her band to new heights of sonic adventurousness. Yet no matter where the group goes from here, one thing will remain the same. “We’re a Texas band,” says Howerton. “We always will be.” 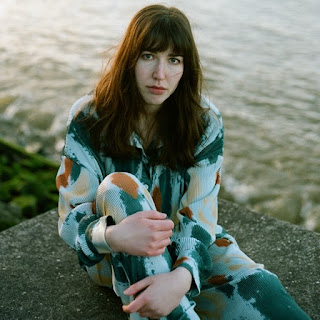 Carry Me is first taster from Thallo’s forthcoming English/Welsh language Crescent EP which follows on 28 October 2022. The EP is themed around Thallo’s own story of chronic pain, which at the time of writing Carry Me left her often unable to stand or walk after suffering unexplainable and debilitating knee pain. As she expands “I wrote ‘Carry On’ in lockdown which was a strange time of losing my work, social life, and then what felt like losing my body to constant pain. I felt completely hopeless and saw a familiar wave of depression approaching. ‘Carry Me’ is about this exact moment of realisation and panic.”

Musically, Carry Me was initially inspired by Thallo wanting to write “a dark ukulele song,” and ended up being improvised due to the pain Thallo was experiencing, making it, as Thallo says, “the fastest song I ever wrote”. The chords, lyrics and vocal melody were done in one take, and the arrangement created after by layering clarinets and synths before sharing the other parts of the instruments in the studio. The effect is a glorious, rich rush of multi-instrumentation and Thallo’s sublime vocal whirling in a jazz-infused dream before it’s emotive crescendo.

Thallo is Elin Edwards, based between her homelands of Gwynedd, North Wales, and London. In 2021 she released three singles, Mêl, Pressed and Preserved and The Water, receiving much early acclaim with an invite to perform at The Great Escape and play SXSW (the latter reschedule for 2023 due to her immobility). At radio she has fans in Sian Eleri (Radio 1 The Chillest Show) and Huw Stephens (BBC 6 Music, Radio Wales), with Thallo also recording a session at Maida Vale; whilst she has garnered press coverage in Wonderland, Noctis, God Is In The TV Zine, When The Horn Blows and many other blogs both UK and Stateside. 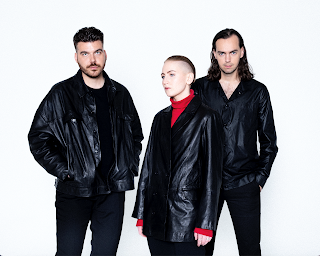 Icelandic trio Vök have shared their poignant new single Illuminating, which follows their recent releases Miss Confidence, Lose Control and Stadium and is out now via Nettwerk.

Illuminating was written with the producer Ben Christophers (Bat for Lashes) in London and is an emotive and euphoric ballad with a passionate message about love and how it can make everything shine a little bit brighter. Margrét says;

“I wrote Illuminating a couple years ago and it truly holds a special place in my heart. We did two magical sessions and finally we had a song both of us could cry to. This song is dedicated to my wonderful fiancé and how love can illuminate everything around you, like thousands of fireflies stuck in your eyes.”

Illuminating follows recent singles Miss Confidence, Lose Control and Stadium alongside the tracks Running Wild, No Coffee at the Funeral, Skin and Lost in the Weekend, all of which made up the band’s unique and lushly layered EP Feeding on a Tragedy. Recorded in their Reykjavík studios, the EP was the follow-up to their acclaimed 2019 album In the Dark, which was written and recorded by the band in collaboration with producer James Earp (Bipolar Sunshine, Fickle Friends, Lewis Capaldi).

Vök continue to cement their position as one of the most exciting and forward-thinking alternative bands right now. Following two critically acclaimed albums, Feeding on a Tragedy marked the first new musical moment in an exciting new era for Vök with lots more still to come and a new project announced soon.
Vök · Illuminating