Pittsburgh-based duo The Early Mays announce their forthcoming EP,Prettiest Blue, which will release on July 1, 2022. Composed of artists Emily Pinkerton and Ellen Gozion, the pair sing Appalachian-inspired songs over a lush accompaniment of fiddle, banjo, guitar, and harmonium. Somewhere on the border between old-time music and modern American songwriting, The Early Mays have built a band with harmonies that feel like home. It’s a partnership that has shared slow-burning, perfectly paired vocals for ten years—from NPR’s Mountain Stage to house concerts all over the mid-Atlantic

“I think part of our aesthetic comes from being introspective people,” Gozion reflects, “We don’t have a flashy, fast sound, but if you let the music engulf you, there are lots of layers. Our songs give people a place to slow down.” “The Early Mays rehearsals are restorative for me,” adds Pinkerton. “The hours spent in Ellen’s living room, with coffee and dark chocolate, following the harmonies wherever they take us, laughing and just loving that exploration as much as we love singing for other people. I hope you can hear the joy of the process in Prettiest Blue.”

From the old-time music community, The Early Mays have absorbed the culture of deep listening that’s central to playing with sensitivity. “Revivalists like us–who didn’t live and breathe Appalachian music growing up–still learn and create by ear for the most part,” Pinkerton explains. “Being able to carry hours of tunes in my head was life-changing. And there is new meaning to uncover each time you return to a field recording or slowly build a relationship with a mentor.” That practice of deep listening–and slow, careful craftsmanship–spills over into every Early Mays performance and production. The duo strives to sculpt a warm, immersive sound.

"On A Dying Day" was written by Michigan-bred Emily, inspired by her "happy place" on the shores of Lake Michigan, where she would go to make sense of the world when things got hard (which she still does!). It's about finding redemption at the shore; the banjo mimics the waves, along with the verses that roll back and forth, each stanza beginning right as the previous one ends. 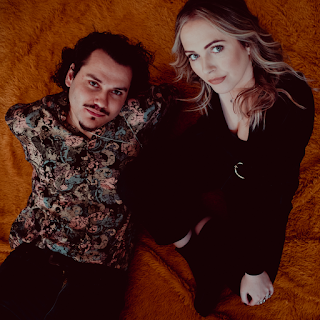 Nova Sync are pleased to announce the release of 'Raya' the fourth single released by Brighton husband-wife duo Inky Nite, and the first taken from their debut 3-track EP For Raya following on 15 August. Inky Nite describe Raya as “The most treasured song on our upcoming EP.”

A dazzling concoction of twinkly synths and euphoric 80s tinged hooks á la Chvrches and M83, Raya is named after the duo's daughter and was her entrance music into the world during her birth last year. As they expand “The synths twinkled, and the drums kicked in just as she was lifted through the sunroof and held aloft Simba style for the very first time.”

Inky Nite began as a lockdown project from the couple’s seaside flat, where a musical cocktail of dreamy alt- pop, melody rich song writing, and 80s tinged Juno synths, shimmering guitars and vintage drum samples emerged. A sonic recipe mixing songwriting greats like Kate Bush and Blondie, with a measure of Metronomy, sprinkled with some Stranger Things soundtrack elements, a twist of Twin Shadow, and finally topped up with smattering of Blood Orange.

Tucson husband-wife folk duo, RISO, announces the release of the self-titled track, “New Eyes.” It’s off the upcoming album, New Eyes, due out July 15. Written shortly before members Matt Rolland and Rebekah Sandoval Rolland became parents for the first time, the song is a letter to their daughter, encompassing some of the most significant memories and experiences of parents, grandparents, and great-grandparents.

Rebekah says, “We did a bit of free-writing individually to jot down some of the stories that our parents and grandparents have shared that have stuck with us, and we took the best of those and put them into the song.” In the first verse, Matt writes about the stars on his childhood ceiling and rocking their baby to sleep in her room for the first time. In the second verse, Matt writes about his Dad’s memories of coming to Arizona for the first time and being overwhelmed by the smell of orange blossoms, which is very characteristic of Tucson and Phoenix in the spring. A wistful reminder about how weightless the world is when you’re a kid, the final verse is about their childhood memories–Rebekah’s in Montana and Matt’s in Colorado, where they spent summers. That verse reflects how the last two years have forced a continual reckoning with the radical change in how day-to-day lives are conducted and how the earliest memories can be turned into experiences for a sense of comfort and stability.

The lyric “New Eyes” feels like an encapsulation of many of the stories and themes on the record and feels relevant to the fact that the whole world is reemerging from the events of the last two years and entering into a new reality with renewed perspective. This track speaks to that collective experience and the duo’s individual histories. Rebekah says, “We both tend to look back nostalgically, aching for a time when we had the freedom to tour for weeks at a time, spontaneously hop on a plane to a new place, spend a day in the studio without lining up childcare, head out at dawn for a trail run along the bike path near our house. As new parents, life has a different rhythm now, but it’s no less dynamic. It’s just different–the challenges and limitations are different; the pace is different; it’s more stationary and we’ve fallen into more consistent routines, which, ultimately, we really love. We’re adjusting to it, and striving to still find creative inspiration on the day to day.”

Matt says, “Music has always been a social experience for me – bands, jamming, orchestras, teaching, sharing. Becoming a father, that social aspect of music takes on a whole new character. Every rehearsal, every record, and radio playlist on the speakers, and even moments in the studio are something I’m experiencing with a new person. She’s absorbing those experiences and so far, she seems to love it. She’s an audience of one. The world became a more magical place when she learned to clap.”