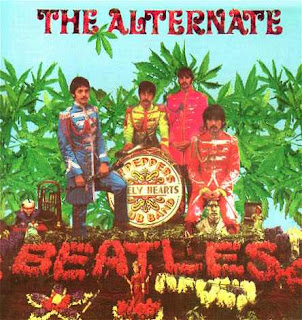 Like a lot of bootleg CD releases, the packaging attempted to make the album look official, however the back cover failed to list the track contents accurately, and the front shown here was a little predictable.

However the music is the key factor, and on this occasion the album is something of a gem to put it mildly.

For nearly every track there's the mono mix at some stage in production, and a few stereo versions along the way.

There are a lot of fragments from 'The Making Of Sgt. Pepper's' with George Martin playing back the individual tracks and explaining things.

In summary these Cd's seem to be a complete overview of the making of the Beatles' Sgt Pepper, with commentary from George Martin, Paul McCartney, and John Lennon.

The studio quality, and 'the story with music' production, is well thought out, it is a collectors 'must have', and of real interest for anyone with just a passing interest in The Beatles, and the development of popular music in the '1960's.

The complete track listing is I believe as follows:

Although not all the material ended up on Sgt. Pepper there is a chronological order to the album in terms of the work undertaken by The Beatles at the Abbey Road Studios between November 24th 1966 and June 25th 1967, hence the 'Little More' referring not only to the commentary. The Jimi Hendrix cover at the end does seem out of place, but hey - it's Hendrix!