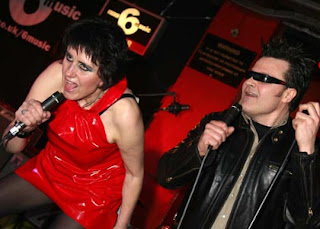 Here's another example of just how many great bands have come out of Scotland.

The Rezillos formed in Edinburgh, Scotland, back in 1976, and were quickly associated with the punk and subsequent new wave movement in the UK, with their panache for short, sharp, three minute pop gems.

The band toured constantly with the likes of The Ramones and The Undertones, by 1979 it was all over.

In 2001 they reformed for a one off gig, and reignited, leading to their continuing and welcome musical presence in 2009.

13.(My Baby Does) Good Sculptures.
14.Fight among yourselves.

Comments: The majority of these sessions are from the reformed band, which are as spontaneous as the early days, however its great to include some early material from a session on the legendary John Peel show.

Purchase: Their latest mp3 release, No1 Boy - The Rezillos

and... there's more - The Rezillos on CD