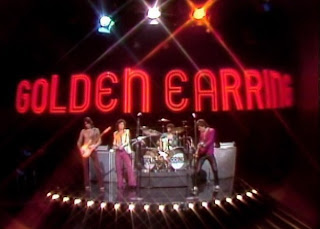 Considering Golden Earring formed in the mid 1960's, and have enjoyed popularity in Holland and a number of European countries ever since, it's great to see them still touring and recording right up to date, and with gigs scheduled into 2010!

They scored their biggest UK and USA success with the classic rock song 'Radar Love', which in some ways over shadows a considerable amount of other great material they have produced down the years.

For your enjoyment this is Golden Earring live in concert at the Parkpop Festival, Den Haag (The Hague), Holland on the 25th June 1989.

Source: FM radio broadcast (this is from a later 're-broadcast').

Genre: Rock (from 'classic' to 'prog' to 'Nederland beat')

Set: This is the full broadcast material, it excludes the first two songs from their performance (Back Home & To Much Women), the total recorded time was 51:28 (117mb).


Links: Official website, in English language - oh how 'the cloggies' look after us, HERE.

Comments: If you live in Holland or within travelling distance Golden Earring are continuing to tour throughout the year. If your a native fan in Holland chances are you already have a copy of this concert, as I understand, it has been broadcast on a number of occasions, if not, its well worth a listen.

Considering Radio Caroline's close relationship with Holland in the 1970's & 1980's (there were Dutch language stations from their radio ships in both decades), it's no surprise Golden Earring resonate with many people in the UK, as they got plenty of air play here down the years.

Purchase: Through Amazon.co.uk a selection of CD's - Golden Earring

YOU HAVE OUR FULL APPROVAL TO PLAY AIR GUITAR AND ROCK LIKE A HIPPY...