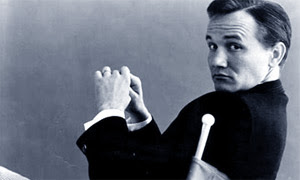 I remember Roger Miller from the 1960's when hits such as 'King Of The Road' and 'England Swings' were often to be heard on the radio. I was of course pretty young then, and preferred The Beatles and all things pop music, but Roger Miller crossed boundaries even to a minor, and sounded great.

This is a recording from his final tour, on this occasion playing at the excellent Birchmere a venue that has helped launch many musical careers as well as feature musical legends.

From The Birchmere, Alexandria, VA, USA, back on February 16th 1991, this is Roger Miller performing on his only ever solo tour.

Roger Miller stopped writing songs in 1978, feeling that his more "artistic" works were not being appreciated. He was absent from the entertainment business following the release of Old Friends but returned after receiving an offer to write a Broadway score for a new musical based upon Mark Twain's The Adventures of Huckleberry Finn.

Although he had never read the novel, Miller accepted the offer after discovering how the story brought him back to his childhood in rural Oklahoma. It took him a year and a half to write the opening but he eventually finished. The work, entitled Big River premiered at New York's Eugene O'Neill Theatre on April 25, 1985. The musical received glowing reviews, earning seven Tony Awards including one for Miller for "Best Score." He also acted the part of Pap's father for three months after the exit of actor John Goodman, who left for Hollywood.

Miller left to Santa Fe to live with his family following the success of Big River. However, in 1990 he began a solo guitar tour. Miller co-wrote Dwight Yoakam's hit "It Only Hurts When I Cry" from his 1990 album If There Was a Way, and supplied background vocals.

The song was released as a single in 1991, peaking at Number 7 on country charts. Miller ended his tour after being diagnosed with lung cancer in the fall of 1991. His last performance on television occurred during a special tribute to Minnie Pearl that aired on TNN on October 26, 1992, the day following Miller's death.

zane said…
Thank you very much!

I know he did studio recordings of at least 2 of the songs from Big River and I'm still trying to find out if he did more, so maybe I might get lucky and some nice person will offer me an answer.

Anonymous said…
Hey Zane--He put out a great studio album in 1986 on
MCA.I have the vinyl but have never come across the album on cd except for 2 songs on a greatest hits.Here is a listing on the songs.Arent most from Big River?
http://www.gafflyrics.com/album/roger_miller-roger_miller_mca_1986.html
27 August 2009 at 01:52

zane said…
That's the one I've been trying to find! I've never seen it anywhere and I never see a mention of it. I always figured that the success of that show would lead to a full album, so I guess at least I know it exists. Thanks!

Anonymous said…
Never heard of this guy before. Fun! Thanks!
Song listing is not quite correct - found a correct listing here http://atruersound.blogspot.com/2009/04/roger-miller-live-at-birchmere.html
30 August 2009 at 09:33