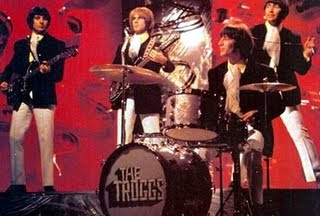 This is the The Troggs live in concert in Dijon, France, back on the 5th October 1981.

Famous for a number of sixties hits including 'Wild Thing' the band found a sympathetic ear at French label New Rose in the 1980s, the label releasing 1982's Black Bottom LP.

This concert would therefore be around the time of the recording of the album and some new material is featured, and with a release on the horizon touring in France made eminent sense.

It is fascinating hearing them do covers of Buddy Holly and The Stones with Reg Presley's accent & vocal style putting a 'Troggs' slant on the proceedings. I never thought of The Troggs as a 'play it loud' rock'n'roll band, I stand corrected!

Comments: This is another of those French FM Radio broadcasts where the presenter pops up here and there to tell you your listening to The Troggs, however thankfully this does not detract as he has been edited out (a little roughly) where possible and the band are just doing their thing regardless.

Anonymous said…
thanks for the amazing Troggs show!
Very surprising!
6 October 2009 at 13:14