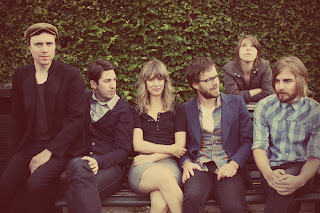 I have a lot of respect for Seattle's excellent radio station KEXP and so any artist who achieves 'song of the day' recognition is for me, worthy of a listen at the very least.

The fact that the promotion that dropped in my inbox a couple of days a go also mentioned the band are from Sweden was an added bonus !

Pixie Carnation are the band and I think they are pretty special. To quote KEXP a little further ...you don’t get any indication that the band is from anywhere but the U.S. as the vocal stylings come through entirely American in a way that even some U.S. bands somehow don’t seem to be able to achieve. Simply structured yet toe-tappingly catchy, “When Did The Lights Go Out” is the kind of rock song that gets its vocal melody stuck inside of your brain but you’re okay with it." -Brian Connolly, (song selected by Morning Show host John Richards), KEXP.org. Their debut EP 'Fresh Poems' is available now.

Listen:
'When Did The Lights Go Out'

There promo states quite accurately 'The product of two years of musical experimentation has culminated in what is now Pixie Carnation, a Swedish based, and yet very American sounding band. From the time that childhood friends Ola Pålsson and Tobias Hellkvist reconnected a few years ago there was an instant artistic connection, and it was only a matter of time before their sound and the band’s lineup became what it is today.

Despite it taking about a year and a half for Pålsson and Hellkvist to find like-minded musicians, Pixie Carnation has now evolved into a seven-member band and made their first recording, Fresh Poems EP.

A classic rock influenced, Americana infused, musical tapestry with orchestral elements, Fresh Poems is already resounding in the ears of American music aficionados, as evidenced by their song “When the Lights Go Out” being named KEXP’s song a the day on November 2nd. Drawing comparisons to Bruce Springsteen, KEXP proclaims that when the music begins, “Immediately you start to think that maybe The Boss has entered the room.”