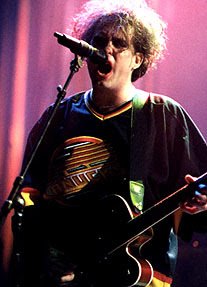 This is The Cure live at the Queen Elizabeth Theatre Vancouver, B.C. Canada on Thursday, August 1st, 1996.

This is from a 'Kiss The Stone' (KTS618) silver disc that was curiously entitled 'Queen Elisabeth Parade', and although it's very good quality recording and apart from the typo's only tracks 1 - 12 are from the gig, and as the concert lasted for over two hours this is clearly only part of the show. Three 'bonus' tracks from a December 1995 London gig are included. All of which suggests that KTS were unable to get hold of the full Vancouver show, which incidentally was superb.

One review of the concert stated 'Robed in the away jersey of our beloved Vancouver Canucks (though I doubt he's a fan -- he wore Canadiens and Maple Leafs jerseys in Montreal and Toronto, respectively), Robert Smith and associates opened the show in fine form with "Want" and "Club America" off their latest effort, Wild Mood Swings. Amidst a stage set up to look like a post apocalypse circus tent and a light show that would make the Northern Lights Perry Bamonte seem like a Grade 2 science project, the Cure moved the crowd into a stage of spiritual ecstasy that Oral Roberts himself would be jealous of'.

Kiss The Stone Records was a bootleg recording company that released many famous bootlegs by bands such as The Waterboys, Van Morrison and Pearl Jam. The company was based in San Marino, where the law allowed the company to market bootlegs as long as it placed royalties for the artists in an escrow account. Most artists wouldn't bother collecting, either because they didn't want to legitimize the bootlegs or because tracking down escrow accounts in a foreign country was more trouble than it was worth. The label is now defunct.