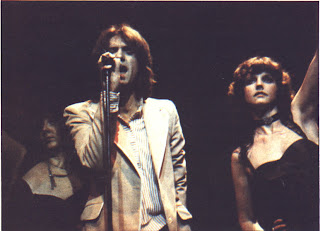 This is The Kinks towards the end of their Sleepwalker Tour from 1977. The album Sleepwalker marked a return to straight-ahead, self-contained rock songs after several years of concept orientated albums.

It was the first album in what critics usually call the "arena rock" phase of the group, in which more commercial and mainstream production techniques would be employed. The line up of The Kinks would be trimmed downed significantly in 1977 following the album's release, as the brass section and backup singers were removed and the band returned to a standard rock band outfit. It is however notable in this gig that both brass and backup singers are very much in attendance. This is The Kinks live at The Rainbow Theatre, London on the 24th December 1977.

This is a superb concert both in terms of sound quality and a very much 'on form' band with excellent supporting musicians and singers. The Rainbow Theatre was a live rock music venue in north London that opened in September 1971 with a concert by The Who, supported by Quiver and closed for the last time in January 1982. It was one of London's key venues to perform at during it's time with live albums from Bob Marley through to The Ramones being recorded and officially released.

Buy: Mp3's at Amazon.co.uk The Kinks

Let's Find H-Man A Wife said…
Always felt the Sleepwalker album never got its due. It's terrific. And thank you for this concert.
21 November 2009 at 04:01

abramson said…
which Bob Marley live was recorded at the Rainbow? For the Ramones concert I was There and it was one hell of good way to see the year out.
22 November 2009 at 09:13