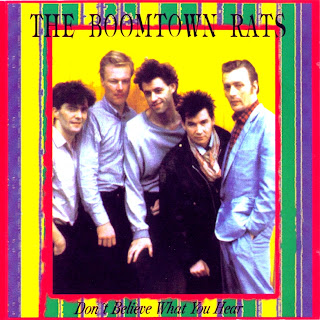 This is the Boomtown Rats live in concert at the Middlesex Polytechnic in Hendon, North London, back on the 16th September 1978.

This recorded version has been circulated as 'Dont Believe What You Hear' and is reckoned to be the best audio quality boot of the show, however it unfortunelty misses the last song of the gig (Do The Rat).

BBC TV recorded the concert, and from distant memory I think it was shown 'live', I remember watching it, and from Bob Geldof's comments it would appear to be the case. The sheer energy and the incredibily professional performance from a 'band of the time' bring back great memories.

All six members were originally from Dún Laoghaire, Ireland. Formed under the name "The Nightlife Thugs," the group agreed on the name change to the "Boomtown Rats" after a gang that Bob Geldof read about in Woody Guthrie's autobiography, Bound for Glory. They became a notable band, but one whose accomplishments were in part overshadowed by the charity work of frontman Bob Geldof, a former journalist with the NME magazine.

The group moved to London in October 1976, and became associated with the punk rock movement. Signing a recording contract with Ensign Records, they released their debut single, "Looking After No.1", in August 1977. It was the first of nine straight singles to make the Top 40 in the UK Singles Chart. Their debut album, The Boomtown Rats, was released in September 1977, on Ensign in the UK and on Mercury Records in the United States, and featured another single, "Mary of the 4th Form". As music journalist, Martin C. Strong noted, "Bob Geldof's moody charisma helped to give the band a distinct identity".

The Rats' second album, A Tonic for the Troops, appeared in June 1978 in the UK. It featured three hit singles, "Like Clockwork", "She's So Modern" and "Rat Trap". A Tonic for the Troops was released in the U.S. on Columbia in February 1979, with two tracks from The Boomtown Rats substituted for tracks on the UK version. Mutt Lange produced "Rat Trap", which became the first rock song by an Irish band to reach Number 1 in the UK, and the first of any description by an Irish band to top the official chart used by the BBC. (The Bachelors had topped the Record Retailer chart in 1964 with "Diane", but only reached Number 2 on the UK Singles Chart). In addition, "Rat Trap" was also the first new wave song to claim the number one spot.