This set of Genesis outtakes have been given some very real care and attention by the 'Progressive Rock Remasters Project', and rather than duplicate effort I have taken the release notes to provide the background details.

On a personal note I have always felt that the era after Peter Gabriel left the band was as creative and inspiring with the albums from 'A trick Of The Tail' through to 'Duke' remaining firm favorites of mine, although if I was pushed for my all time favorites I guess 'Foxtrot' and 'Selling England By The Pound' would be two of the 'top three' along with the album these outtakes are associated with.

From the release notes: The Sheffield brothers built Trident studios at No. 17 St. Anne’s Ct. Soho in 1967. This studio was the recording site for many rock albums of the 1960’s and 70’s
including David Bowie’s Ziggy Stardust and many tracks from the Beatle’s White Album.
The Genesis sessions captured on this CD were recorded there in October of 1975 and
then remastered to enhance the listening experience.

The CD begins with Beloved Summer which was the working title for the B-side
release called It’s Yourself. It is one of the few songs on the CD that includes vocals.
This is followed by an instrumental version of the song Ripples. Mike Rutherford can be
heard counting the tempo at the beginning. A second version of the song follows.
Robbery, Assault and Battery is next and is also in the instrumental mode. Just before
the next song, Los Endos, Phil Collin’s can be heard counting the tempo. This song is
separated into two tracks detailing different segments of the song. Mad Man Moon is
then presented with piano, drums and some bass. It is, again, an instrumental version
and suffers from poor recording but is still quite impressive. Trick of the Tail
is then offered with vocals in a version very similar to the official release.

Two versions of Entangled follow, again devoid of vocals. The accentuation of the
guitars is particularly impressive during the first take while the second take is
more involved and includes alternatives to the studio mix. Dance on a Volcano is
the next track followed by Squonk. Both are presented without vocals and provide
an interesting opportunity to really study the instrumentation of these songs. 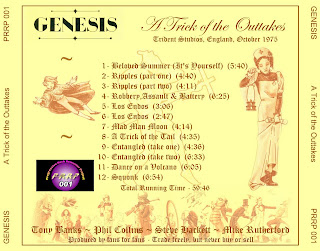 Remastering Notes: Most of the recording suffers from a great deal of Hiss. This was removed from
each track separately.

Bass levels were found to be excessively high on many tracks leading to a muddy sound quality. Bass was cut and both treble and mid range frequency ranges were then raised to bring out the detail within the recording.

Many of the peaks within the songs were clipped and required software restoration. The whole recording was then normalized to a consistent volume level.