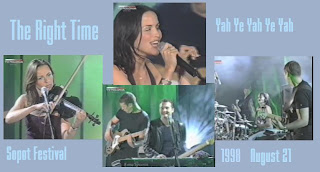 This is The Corrs live at The Sopot Festival in Poland back on the 21st August 1998. The band have been on hiatus since 2006, as raising families and personal aspirations understandably take priority.

Having seen them live a couple of times, this performance is a fine representation of their excellent musicianship and harmonies.

The Corrs are one of those bands that make what they do seem so easy, however years of practice lay behind their superb performances. With the encouragement of their parents, Jim took guitar lessons, Sharon played the violin and Andrea took up the tin whistle. Caroline did not learn to play the drums until she was 17 and was helped by a boyfriend at the time. They were all taught the piano by their father. Throughout their teenage years the children practised in Jim's bedroom at a rented house. Andrea sang lead vocals, Sharon played the violin, and Caroline and Jim played the keyboards.

The Sopot International Song Festival was one of the most prestigious international song contests, often compared to the Eurovision Song Contest. It has been organized annually by the Polish state television TVN in the coastal resort of Sopot, Poland.

The first Sopot festival was organized in 1961. Between 1977 and 1980 it was replaced by the Intervision Song Contest which was still held in Sopot. Unlike the Eurovision Song Contest, the Sopot International Music Festival often changed its formulas to pick a winner and offered many different contests for its participants. The festival has always been open to non-European acts and countries like Cuba, Dominican Republic, Mongolia, New Zealand, Nigeria, Peru, South Africa and many others have been represented in this event.

The contest lost popularity in Poland and abroad in the 80s and even more in the 90s and the rather unconvincing organization by the TVP made the authorities of Sopot give the organization of the 2005 Sopot International Song Festival to a private TV channel - TVN. Since 1999 there was no Grand Prix contest within the festival. TVP chose to invite well known artists instead including the likes of Whitney Houston or The Corrs. In 2005, TVN was expected to bring the contest back. In 2006 TVN invited Elton John.