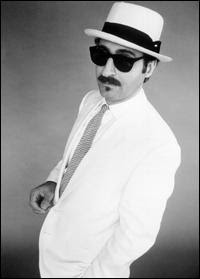 This is Leon Redbone in session recorded at the VPRO Studios, Hilversum, Netherlands on the 28th January 1977 for future radio broadcast.

For those unfamiliar with him Leon Redbone is an American singer and guitarist specializing in interpretations of early 20th-century music, including jazz and blues standards and Tin Pan Alley classics.

We have included a link below to a short biography of Leon on starpulse.com. I guess this limited session which features some very enjoyable if not a little quirky material for some, represents an introduction of sorts to Leon Redbone. If he is new to you and this arouses some interest, please do investigate further, I think you will be in for a pleasant surprise, and there is alot more depth to him beyond a solo studio session from way back.

Session: Taken from two separate FM broadcasts, cannot confirm if this was all Leon recorded at VPRO studio.

The first four tracks from this session were not broadcast by VPRO until 2001, the final two tracks were broadcast originally in 1978, we do not know in what context these recordings were used on the radio.

Leon Redbone's website is currently asking the following - Do you own original early photos of Leon Redbone you'd like to share? If so, we're looking for any interesting and older photographs of Leon Redbone to include in an upcomming Anthology which we'll be putting together. We can't guarantee that we'll use them but we'll certainly give you full credit and a free Anthology if we use your photo.
See the link to the website above .

enoch said…
thanks! one can never have enough leon redbone. great stuff.

Anonymous said…
I couldn't get the container to decompress anything other than the first track. Oh well, one Leon Redbone track is better than none. More importantly, thank you for an amazing blog and for featuring Mr Redbone's music. I've long considered Redbone to be an unsung genius and a mine of information on an area of music that has been largely forgotten about. Anyone whose interest is pricked by this VPRO session should check out his official releases, particularly "From Branch To Branch" and "Sugar".
22 July 2010 at 20:23

Anonymous said…
Dear Mike
Many thanks for re-upping this show from the fabulous Mr Redbone. No troubles this time.
7 August 2010 at 20:56