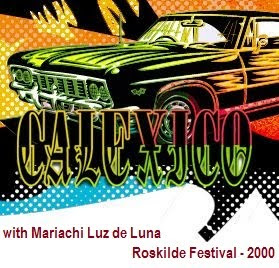 This is Calexico in concert at the Roskilde Festival held annually south of Roskilde in Denmark, with this concert taking place on the 1st July 2000. They were joined on stage part way through the set by touring companions Mariachi Luz de Luna.

This show took place the evening after the tragic accident during the Pearl Jam set where nine fans were killed when the crowd surged. (Pearl Jam's song "Love Boat Captain" references the tragedy with the line "Lost nine friends we'll never know... two years ago today." When performed in concert, lead singer Eddie Vedder modifies the lyric to reflect the passage of time since the tragedy).

One of Calexico's founder members Joey Burns remembered the occasion as follows - "Calexico and members of Mariachi Luz de Luna travelled roughly 1,000 kilometers the night before our performance at Roskilde in Denmark on July 1, 2000. I am sure we had been up nearly the whole night partying and watching movies on the bus and were fast asleep upon arrival to the festival. When we all woke the next morning there was an unusual somber tone in the air as we began hearing the news and details of the tragedy that occured the night before during Pearl Jam's set on the main stage. We couldn't believe it and were all in shock. How could so many people die at one of Europe's most renown festivals?

Some bands decided to cancel and there was confusion at first whether or not the festival would continue. For a while we were all on hold not knowing what would happen. It was a very difficult decision, but the promoters of the festival decided to go on as scheduled.

Chan Marshall of Cat Power played before us early that afternoon all by herself on the same stage as us and
delivered a very heartfelt and moving set. She tapped into the spirit that everyone in the whole festival grounds was feeling with her soulful voice and minimal accompaniment. After experiencing her set, John Convertino and I decided to begin our set as a two piece (drums and guitar) and play an instrumental meditation in honor of those who had passed away. From there we slowly built up the dynamics of the set and it was clear that even though the crowd was in a state of mourning, they also wanted to celebrate, and so when the surprise guests of Mariachi Luz de Luna walked onstage, the whole crowd lit up. It was an amazing set, one we will never forget."


Comments:
Calexico is a Tucson, Arizona-based Americana / Alternative country band. The band's two main members, Joey Burns and John Convertino, first played together in Los Angeles as part of the group Giant Sand. They have recorded a number of albums on Quarterstick Records, while their 2005 EP In the Reins recorded with Iron & Wine has reached the Billboard 200 album charts. Their musical style is influenced by traditional Latin sounds of mariachi / conjunto / cumbia / Tejano music and also the Southwestern United States country music as well as '50s-'60s jazz and '90s-'00s post-rock, and they have been described by some as desert noir or indie rock. The band is named for the border town of Calexico, California.

THIS IS A WONDERFUL CONCERT - ENJOY.