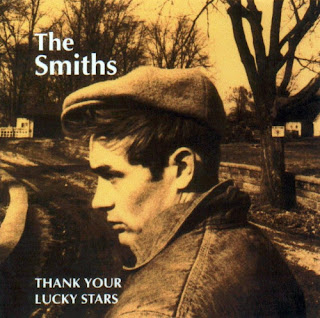 Regarded by many as the best The Smiths live bootleg (and vastly superior to the 'contractually obligitory' live album Rank), this concert recording was from the second of two nights at the Los Angeles Universal Amphitheatre and performed on August 26th, 1986.

Circulated as a silver disc by 'Big Music' and titled Thank Your Lucky Stars. (Big Music :: BIG091) the CD version uses artwork reminiscent of The Smiths own album covers.

Whoever said that misery loves company wasn't kidding - almost 12,000 people turned out for The Smiths' two-night stand in Los Angeles. What they heard were 24 perfect pop sparklers, exquisitely executed by maestro Johnny Marr, while the Most Miserable Man in Manchester camped around the stage, occasionally stopping to pose languidly across the monitors, nipples to the wind, to face his adoring public.

But this was a wondrous journey through The Smiths' songbook, from 'Hand In Glove' to 'Panic', with all those funny, depressing, and anguished points in between.

Listening to The Smiths on record forges such a bond of intimacy between Morrissey, the music, and the listener that hearing those same songs played live, in front of thousands of people, is like having your diaries read aloud in public. Sharing The Smiths can be painful.

The man Himself was at his most winsome, triggering a minor stage invasion by telling the restless crowd, "If you get stopped by a security guard, kiss him on the lips!"

After being pelted with enough flowers to start his own nursery, the Singer acceded to popular demand by divesting himself of his shirt, revealing, appropriately, the hairless, caved-in chest look usually associated with seven-stone weaklings. Morrissey was, by turns, foppish, funny, and effete, but never dull."

The will they or wont they debate over a reunion of The Smiths has dragged on through out this decade with incredible sums of money mentioned for a tour. Both Johnny Marr and Morrissey have repeatedly said in interviews that they will not reunite the band. With sums of £40 million being mentioned clearly it is not the money. The magic of The Smiths live in concert is atleast done justice by this concert recording.

the informed anarchist said…
Thanks Mike all then way from the Tiwi Islands in the tropical north of Australia. Love the blog and the chance to revisit some of the family ;)

Anonymous said…
You are my favorite person right now. Thank you for uploading this!
22 August 2010 at 00:14

Anonymous said…
A great post! I love the NME review, the memory seems very romantic. Thanks for posting the live bootleg, can't wait to listen!
30 August 2010 at 15:29