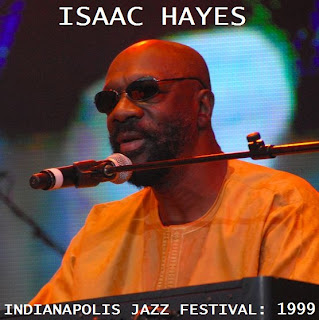 This is Isaac Hayes live in concert at the Indianapolis Jazz Festival back on the 19th June 1999. Isaac Hayes was born in Covington, Tennessee, in Tipton County. He was the second child of Isaac Hayes, Sr. and Eula Hayes. After his mother died young, and his father abandoned his family, Isaac, Jr., was raised by his maternal grandparents, Mr. and Mrs. Willie Wade, Sr. The child of a poor sharecropper family, he grew up working on farms in Shelby County, Tennessee and in Tipton County. Isaac dropped out of high school, but he was later encouraged by his former high school teachers at Manassas High School in Memphis to complete his high school diploma, which he did at the age of 21. After graduating from high school, Hayes was offered several music scholarships from colleges and universities. Hayes turned down all of them because of his obligations to his immediate family. Hayes next worked at a meat-packing plant in Memphis by day, and he played music at nightclubs and juke joints
2 comments
Read more
More posts