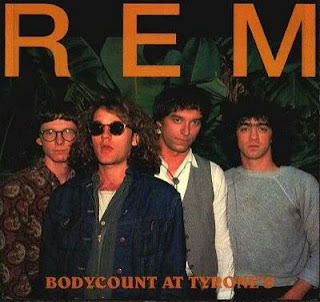 Reloaded - 05/May/2015 This is R.E.M. recorded live (soundboard sourced) at one of the bands local venues namely Tyrone's O.C., in Athens GA, USA, way back on the 23rd September 1981. This recording features both sets and includes the sound check (not proven but by sound quality etc generally agreed to be from this gig).


This was the bands 26th gig at Tyrone's O.C. the first at this venue taking place just over a year earlier on the 6th May 1980, and that performance was only their 5th ever full live gig. As regular home town shows go, the band sound incredible, full of natural energy, respectful of a growing local following and clearly enjoying and developing their craft.

Noting their early history wikipedia tells us: In January 1980, Michael Stipe met Peter Buck in the Athens record store where Buck worked. The pair discovered that they shared similar tastes in music, particularly punk rock and protopunk artists like Patti Smith, Television, and The Velvet Underground. Stipe said, "It turns out that I was buying all the records that [Buck] was saving for himself." Stipe and Buck soon met fellow University of Georgia students Mike Mills and Bill Berry, who had played music together since high school. The quartet agreed to collaborate on several songs; Stipe later commented that "there was never any grand plan behind any of it". Their still-unnamed band spent several months rehearsing and played its first show on April 5, 1980 at a friend's birthday party held in a converted Episcopal church in Athens. After considering names like "Twisted Kites", "Cans of Piss", and "Negro Wives", the band settled on "R.E.M.", which Stipe selected at random from a dictionary.

The band members eventually dropped out of school to focus on their developing group. They found a manager in Jefferson Holt, a record store clerk who was so impressed by an R.E.M. performance in his hometown of Chapel Hill, North Carolina, that he moved to Athens. R.E.M.'s success was almost immediate in Athens and surrounding areas; the band drew progressively larger crowds for shows, which caused some resentment in the Athens music scene. Over the next year and a half, R.E.M. toured throughout the Southern United States. Touring was arduous since a touring circuit for alternative rock bands did not then exist. The group had to tour in an old blue van driven by Holt, and the band members lived on a food allowance of $2 a day.

During the summer of 1981, R.E.M. recorded its first single, "Radio Free Europe", at producer Mitch Easter's Drive-In Studios in Winston-Salem, North Carolina. The single was released on the local independent record label Hib-Tone with an initial pressing of one thousand copies, which quickly sold out. Despite its limited pressing, the single garnered critical acclaim, and was listed as one of the ten best singles of the year by The New York Times.

Reloaded 5th May 2015 - download link in comments below.
REM