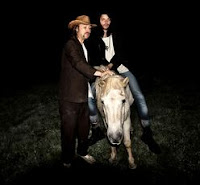 Background: This is the second single from Australia's Pets With Pets, titled "Acid Girls." Recommended for fans of Ratatat, Wavves, Japandroids and Sonic Youth. The group are currently making their first rounds in the U.S. including last week at SXSW, before heading to New York City to play the Aussie BBQ at the Bell House in Brooklyn.

Staring in late 2006 with a home recorded EP, Zayd Thring is Pets With Pets. In 2007 he took on a drummer, the first of many that define the group over the years, and started playing shows as a band.  From the start, Pets With Pets have garnered attention from the likes of NME, and have gained a cult following.

Last year saw the band releasing Saturday Aquatic Pixie Acid, released on Sensory Projects, to critical acclaim. Alongside Zayd is bassist Ash Buscombe from Witch Hats, Will Macfarlane on synthesizer from The Shocking Pinks (who were signed to DFA Records) and Alex MacFarlane on drums. 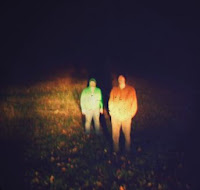 Background: Ghost of Chance are an experimental rock band based in New Haven, Connecticut. The group's distinctive style is characterized by subtle time signature changes and sonically open experimentation set to surrealist lyrics. Ghost of Chance's sound takes its influence from 1960s psychedelica, '70s glam, math rock and post-punk while maintaining the shimmer of classic pop sensibilities. All of this adds to the unique yet familiar sound that Ghost of Chance have cleverly cultivated.

Ghost of Chance began as a collaboration between Jayson Munro (The Striders, Noisette, Deluxe) and George Moore (Duvet Cover, Noisette) in 2008. The two sent back and forth demos and ideas for a project that had no name and really no direction. After awhile the two came up with the name, based on a William Burroughs Novella, and a direction. The group's first album was crafted and recorded in the sweltering confines of an attic apartment during the summer of 2009. Moore and Munro re-recorded demos and created several songs in the studio, attempting to embody the chaotic spirit of the novella. After completing the band.s first album, Moore and Munro started the Ghost of Chance live band. Their live set consists of Jayson on guitar and vocals, George on guitar and keyboards, Dave Corsak on bass, and Mark Niciu on Drums. The live band brought new dimensions of vibrancy and controlled chaos to the mystical contours sketched out in the recordings.

The groups second album, A Simple Beast, began as an effort by Munro to write a series of songs about the wild desolation of Chernobyl after the tragic 1986 nuclear disaster. As time went on, Munro adhered less directly to the specific concept but continued to write songs that conveyed the eerie combination of vacancy and unchecked wilderness found in Chernobyl today. Moore, working in his own modest home studio, wrote two songs that similarly capture this aura. The album.s title, A Simple Beast, references the inscrutable animal beings that have adapted themselves to Chernobyl.s poisoned landscape.

The group is currently in the process or mixing their third album, "Be My Void," which is scheduled to be released July 2012. Prior to this release, the band will be sporadically releasing singles off "Be My Void."

Background: Sid Bernstein is on a musical mission...

Ever since the beginning of his career as a music promoter, booker and manager in the Bronx in the 1940's, Sid Bernstein's been blurring the boundaries between cultures and communities by simply sharing the sounds he loves with everyone his life touches. From migrating uptown Latin bands downtown, to opening the doors for a British Invasion, ushering radio personalities from the public ear to the public eye, and bringing Beatles to baseball stadiums - Sid's love of music and tireless support for the artists who create it have not only enriched cultural history but united a whole world in song.

Now, seventy years later, at the seasoned age of 93, Sid Bernstein would like to share with you some music of his own. Coming soon is a new collection of songs which have meant the most to him over the years - now as sung by Sid himself!

"Sid Bernstein is a legend in this business. He helped define an era in music by bringing the people an array of artists that changed the times" - Lenny Kravitz

"Sid Bernstein is the quintessential gentleman promoter. He is part P.T. Barnum, part Donald Trump and part Henry Kissinger. His life is filled with the colorful, the implausible and the enormously entertaining" - Geraldo Rivera

"Sid Bernstein is one of those unique individuals.... He's been able to swim in the entertainment's shark-infested waters for years unscathed. He's one of the good guys" - Dick Clark.

The Candy Opinion: Please, please, please, check Sid Bernstein doing his own thing out! La Vie en Rose is a wonderful song that he gives new life to. This is just a taste of a man who has been in the music business longer, than pretty much every Beehive Candy visitor has been alive (and we have featured prog rock here, so some of our visitors are dinosaurs). Wonderful, just that.
Web: Official HERE. Listen: La Vie en Rose (mp3). 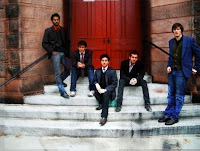 Background: Under one roof in New England's Pioneer Valley, Darlingside came together with five songwriters, a mandolin, a cello and violin, guitars and drums, a chorus of voices, and a van named Chauncey. Holed up in their home between a cornfield and the Connecticut River, they forged a seamless, exhilarating sound at the intersection of rock, classical, and folk music. The band is currently rolling out an innovative subscription album, Pilot Machines, and shaking rafters along the eastern seaboard with their vibrant live shows.

Darlingside traces its diverse sound to an eclectic array of musical origins: Harris picked up the cello at age six, and appeared twice on NPR with his classical piano trio. Auyon spent a year-long travel fellowship studying the traditional music and instruments of Brazil, Turkey and Ireland. Don toured nationally as a boy alto, and later worked as a singer-songwriter on sunset boat cruises in Maine. Dave began singing and arranging music in college, then spent two years learning guitar as a street musician in Boston and abroad. Sam took up drums at the age of seven and developed an intricate style that draws on his rock, celtic, and jazz backgrounds. Together, the five close friends are a powerhouse of vocal, instrumental, songwriting and performing talent.

Following 2010's self-recorded EP 1, Darlingside teamed up with producer Nathaniel Kunkel (Sting, Crosby and Nash, Maroon 5) in 2011 to turn their house into a hi-fi recording laboratory and playground. The result was Pilot Machines, an insistently melodic collection of new songs that feel both familiar and ground-breaking. The band is now in the midst of an ambitious release, with three 7" records and a string of exclusive pre-release events ramping up toward the full-length album in Summer 2012. 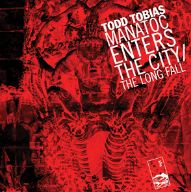 ‘Manatoc Enters The City / The Long Fall’ is a multi-part mini-epic that offers a tantalising taste of Medicine Show’s shadowy steampunk dystopia. The track kicks in like a panic attack, a dizzying flurry of organ and toms alternating with lurching guitar. The chaos soon calms, but builds in intensity again as a massive detuned riff pummels your ears into submission. The final coda is an exercise in unwinding as the song’s tight, muscular coils begin to lose their tension.

The single comes with a bonus ‘B side’ called ‘Crystal Palace People’ taken from the soon to released bonus EP Night Above Ground. A lilting and intimate electro-folk ballad, ‘Crystal Palace People’ is a glimmering, soft-focus comedown after the A side’s rush - only to become unhinged in its closing moments as the recording is chewed and slurred.

“A psychedelic boat ride that leads to a poorly lit and wicked place, where even the nursery rhymes of youth become foreboding...” - AllMusic on Circus Devils’ Ringworm Interiors.

Background: Boston has always been indie rock’s best-kept secret. Launching the careers of acclaimed artists such as The Lemonheads, Guster, and The Hush Now, you never know which band will break next. Well, look no further!….Meet Cowgill, one of the more brilliant groups to grace your ears in recent memory.

Formed in June 2011, Cowgill is the perfect combination of indie rock and folk rock, recommended if you like The Decemberists, The Shins, Fleet Foxes, Dr. Dog and The Airborne Toxic Event - combined with the catchy hooks and melodies of The Beatles. With the release of their debut single, “Plans,” the group is ready to take on the world with guitar, mandolin(?), and trombone(!) in hand as they fight for the hearts of music fans.

On May 17th, Cowgill unveils “Side One" of their debut full-length album,
Planted, celebrated with a hometown CD release show at The Middle East Upstairs in Cambridge, MA. Get ready to meet your new favorite band…it’s going to be one hell of a ride.