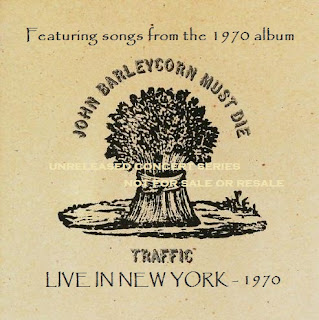 This is Traffic live in concert at the Capitol Theatre, Port Chester, New York, USA back on the 26th June 1970. The concert was broadcast live on the excellent WNEW-FM.

In the beginning of 1970, after the demise of Blind Faith, the band having lasted barely six months, Winwood returned to the studio ostensibly to make his first solo album, originally to be titled Mad Shadows. He recorded two tracks with producer Guy Stevens, "Stranger to Himself" and "Every Mother's Son", but yearned for like-minded musicians to accompany. Inviting Wood and Capaldi to join him, Winwood's solo album became the reunion of Traffic, and a re-launch of the band's career.

As did most of their albums, it featured influences from jazz and blues, but the version of the traditional English folk tune "John Barleycorn" also showed the musicians attending to the same strains of folk baroque and electric folk as contemporary British bands The Pentangle and Fairport Convention.

Five live versions of the then brand new album are performed in this the second performance of the evening along with earlier material, in what is an incredible piece of the bands history.

Beehive Candy said…
We are going to see how things go prior to 'Project Stealth' with this file.

Feedback any problems via email or a comment here.

Unknown said…
I believe I was in attendance at the 1970 Port Chester Capitol Theatre Traffic concert. My memory is a bit vague, although I recall the trio of Winwood, Capaldi, and Wood.
In listening back to the set, I hear bass that would most likely be from Steve's B3 pedals, but other bass can be heard- and in "Stranger to Himself" I seem to hear bass guitar in addition to Winwood's lead guitar.
Was there a 4th member there, playing bass guitar?
2 August 2018 at 19:58