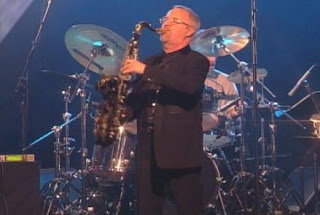 This is Tom Scott live at The Golden Bear, Huntington Beach, CA, USA back in 1979. These are the notes in full that came with the recording (grateful thanks to the person who penned them) - This recording comes from the archives of the Golden Bear night club in Huntingon Beach, California. At the time, the Golden Bear was the oldest running night club in America open since the mid 1920's. Eventually earthquake building codes made it too expensive to upgrade, and it was eventually torn down.  Everybody from Jimi Hendrix, Janis Joplin, and The Doors have played at the Golden Bear.

I was a frequent patron of the Golden Bear, and I recorded many shows at the venue.  Eventually I became friends with the sound board guy, and we began trading some tapes.  This recording is one of those tapes. Like many of the Golden Bear tapes, this one isn't a complete show.  After 47 minutes, it cuts off. Since the Golden Bear usually ran 60-70 minute sets, it's very likely that the last 15-20 minutes are missing.The concert was recorded from the sound board on the house cassette deck in mono.

Tom Scott's professional career began as a teenager, as leader of a jazz ensemble Neoteric Trio, and then as a "first-call" (i.e. high-demand) session musician. He has dozens of solo recordings for which he collected thirteen Grammy nominations (three of which he won). He also has numerous film and television scoring credits, including composing and conducting the score for the movie 'Conquest of the Planet of the Apes'. He has also appeared on records by such diverse artists as George Harrison, The Grateful Dead, Paul McCartney, Steppenwolf, Whitney Houston, Barbra Streisand, Joni Mitchell, Blondie, Eddie Money, Steely Dan, Pink Floyd, The Blues Brothers, Quincy Jones, Carole King, Olivia Newton-John and Frank Sinatra.