Showing posts from February 5, 2012
Show All 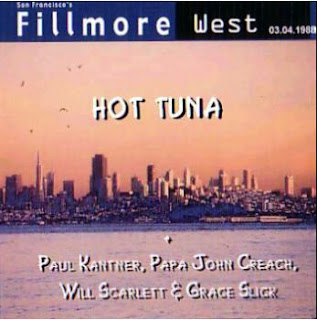 This is Hot Tuna live at The Fillmore, San Francisco, CA, USA, on the 4th March 1988. Hot Tuna are an American blues-rock band formed originally by bassist Jack Casady and guitarist Jorma Kaukonen as a spin-off of Jefferson Airplane. They are renowned for playing acoustic and electric versions of original and traditional blues songs. There is a strong likelihood that this concert that bought Paul Kantner and Grace Slick back on the stage together helped the Jefferson Airplane reunion tour and record in 1989 to come about. Regarding this period in both bands history wikipedia states - Hot Tuna was reformed again as an acoustic band in 1986 performing classic material, with Joey Balin joining on rhythm guitar until 1987. Kantner joined the band in 1987 and 1988 adding some old Airplane songs to the set list. Grace Slick showed up on stage as well for one show at The Fillmore in March, 1988. The band continued into 1989 and Jorma and Jack joined the 1989 Jefferson Airplane reunion
5 comments
Read more
More posts