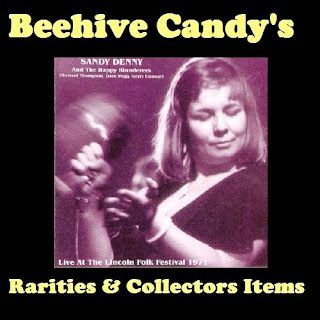 This is Sandy Denny and The Happy Blunderers live at the Lincoln Folk Festival (England) back on the 24th July 1971. She's backed by the self named Happy Blunderers, consisting of Fairport members Richard Thompson, Dave Pegg and Jerry Conway. Richard plays guitar throughout and sings backing vocals on the third song (Crash On The Levee - a Dylan song). The first solo album by Sandy Denny 'The North Star Grassman and the Ravens' was also released in 1971 and is distinguished by its elusive lyrics and unexpected harmonies. Highlights included Late November, inspired by a dream and the death of Fairport band member Martin Lamble, and Next Time Around a cryptogram about Jackson C. Frank, one of her many portraits in song. Both songs were included in this short set. Also on the bill at the festival were The Byrds, Dion, Tim Hardin, the Incredible String Band, Ralph McTell, Pentangle, Tom Paxton, Steeleye Span, Dave Swarbrick & Martin Carthy, James Taylor, and Sonny T
7 comments
Read more

Background: Lila Rose has always stood out from the crowd - In substance, style and appearance she has never been average. Born with “ultra sound sensitivity”, Lila’s experience of the world around her has been quite out of the ordinary, and very much sonically based. Lila is both blessed and afflicted with sounds that most people cannot hear; while this is a gift when it comes to making music, it can also lead to great personal discomfort at times. Last fall, Lila released her debut, full-length album, HeartMachine, which she co-produced with David Earl (AKA LogicNinja.) Shaping up to be a masterpiece of sound, song craft and technology, HeartMachine bends the genres of Electronica, Indie pop, trip-hop and alternative rock around an emotional core, finding a critical musical mass that is explosive in its intensity and brilliant in its light. Lila writes from the well of her experiences, building on the pain of human existence to create songs that speak to the human heart. Out of
1 comment
Read more
More posts