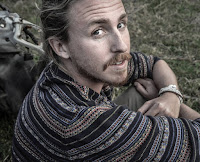 Here we go a quoting again - Australian singer-songwriter Calan Mai (aka Jordan Lawrence) recently unveiled his new single 'Black Box' and has followed up with a live studio session. It features a new track 'White Dove', a cover of Eminem's 'Stan' and three tracks off his upcoming debut EP 'Days on the Rock Face', out July 10th (worldwide) via Canvas Sounds. 'Live at The Den' was recorded in Gold Coast, Australia a few months prior to relocating to Manchester with fellow Canvas Sounds signers, FAIRCHILD and Lyon Apprentice. The makeshift studio is also were he recorded his debut EP with producer/mixer Adam Lyons.

It's been a patient build up for the 24-year-old Lawrence who showed his potential years ago as a teenager, winning the 2006 Australasian Children's Songwriting Competition. It's no surprise that his primary focus is still lyrics - often retrospective, grounded in past events. His debut single 'We've Got Love' was released early last year and has notched up over 90,000 Soundcloud plays and received airplay on Triple J, Amazing Radio and debuted at number 10 on the KKBB Singles Charts in the US.

'Black Box' is a fine song, dreamy and gentle as it develops and builds, new layers sneaking in without losing it's original direction and feel. Facebook HERE.

Their words - Ol’ Silver Tongue, a garage rock duo out of Oakland CA, is comprised of Boronkadonk on vocals/guitar and C. McCock on percussion/vocals.  They are releasing their debut EP Nobody Special independently on June 27th at The Independent in San Francisco CA. C. McCock and Boronkadonk met at a salsa dance party in 2014.  Their conversation quickly turned into a shared interest in music.  Soon after Boronkadonk had C. McCock over to play music in his garage studio.  They have worked on many original tunes and covers by The Velvet Underground, Jimi Hendrix, The Gorries, and others.  Ol’ Silver Tongue artisinally blends American and world music then surrounds it with cherry red hard rock candy.

When not playing crushingly rugged rock music C. McCock cooks with local food pop up Two Mamacitas Kitchen and plays as a session drummer with many groups in the Bay Area. Boronkadonk writes and teaches music while taking care of his 110 pound dog Osito. Website HERE.

Sometimes stripped down, good old basic rock with a strong twist of roll does wonders. For me this is what 'garage rock' is all about, the featured song has some 'Hendrix' vibes, but enough originality for this to be a compliment.

We are informed - On June 23, 2015, Portland, Oregon-based Chris Marshall & The August Light will celebrate the release of their latest full-length, Some Kind of Dream, a departure from the alt. country/Americana of previous offerings, and an expansion of the new ground they started to chart on 2012's Waltz EP.

Some Kind of Dream is produced by Patti King (The Rentals, Radiation City), who is also a member of - and band leader for - The August Light (which also features Ryan Reetz on keys, William Joertz on bass, and Joel Swift on drums), Some Kind of Dream is a genre-bending punch that proves Marshall is a songwriter able to meld atmospheric rock, spacious melodies, and folk traditions into songs that are both gorgeous and poignant.

Out went the old and in came the rest with Some Kind of Dream. Most notably, the rest includes an array of synthetic sounds. “These Days,” its shadowy emotion buttressed by the lyrical realisation that “these days, I prefer the night,” leans toward doomy trip hop. “Castle” owes to producer Clams Casino, an artist that has played a significant role in shaping the sound of modern hip-hop.

But “Break Bread” cuts closest to folk. And “Go Straight Home,” written after the death of Marshall’s grandfather, is just a gorgeous soul song with the uplifting horn arrangements to prove it.


This is some album, take a listen to 'Feel Like Running' and if you like it, the album will deliver even more incredibly well produced songs. It's one of those albums where you can never be certain what the next track will deliver, in a good sort of way.

And the bio reads - It starts simply enough - a chord, a phrase, a riff, a melody. Josh Flagg and his band experiment with these basic ingredients, rearranging and combining them into an unexpected whole. What is not simple is explaining the depth of the material. Josh’s songs can be anthemic, wrenching, smouldering, poetic, dynamic or anywhere in between. He crafts lyrics and sounds that can unsettle or soothe; that surprise and reward you with repeated listens. Once you’ve heard one of his songs, you can’t get it out of your head.

Flagg is following up the taut, beautifully constructed power pop gems on his debut full length Devastate Me with the darker, harder, more complex songs of the EP Lights Out. Featuring a three pronged guitar attack, soaring vocals and asymmetrical songwriting, Lights Out itself is the precursor to Flagg's second full length album due out Fall (autumn for us Engerleesh) 2015. Website HERE.

Lush powerful guitar hooks and an equally powerful voice compete and compliment wonderfully throughout 'Lights Out'. Indie rock with a punch. 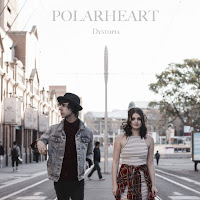 More fine words - Hailing from Sydney, Mary and Chris are Polarheart. Having played alongside each other in previous projects, the duo began writing together in early 2013. They found a strong chemistry, and a year later Polarheart was born.

Their combination of dreamy vocals and abstract soundscapes, now combining elements of garage, trap, and RnB makes for a captivating listening experience. Drawing on a range of musical influences with classical training in common, and a love for pop and electronica, Polarheart continue to explore new sounds and unique ways to convey relatable messages through their music.

Their debut single Paralyse has received airplay in the UK and the US, as well as across Australia. The track has had over 73,000 plays on SoundCloud and was featured on MTV Iggy, Hillydilly and Nylon Magazine US. Their follow up single Livealie received positive on line reviews from around the globe, was played on Triple J, and was played on the runway as part of the Mercedes Benz Fashion Festival Sydney 2015. Moving from strength to strength, the duo’s third single Hypnotise, received rave reviews, and plenty of airtime, including Triple J. Facebook HERE.

Some times you just need a dreamy pop song with fine vocals and a well crafted backdrop. Add some hooks that embed themselves (painlessly of course) and we have something like 'Dystopia'. Best served with a chilled cocktail and canapes.